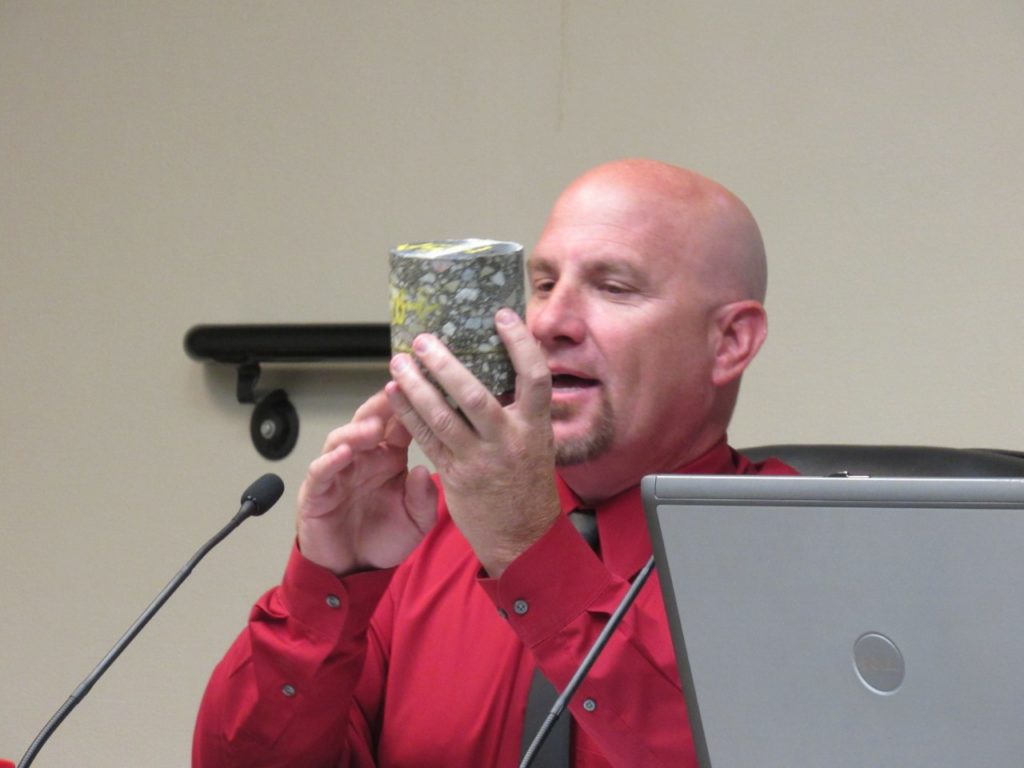 City Manager Bill Avera showing a sample of how the streets are being treated through the recent road improvements. Photo by Noe Magaña.
×

The Hollister City Council took an official stance at its Sept. 4 meeting against California Proposition 6, which aims to repeal a gas and vehicle registration tax used for regional road improvements.

The Road Repair and Accountability Act of 2017, also known as Senate Bill 1, is a 2017 transportation law that funnels collected monies from the state to local governments for repairs and improvements to roads, state highways and public transportation.

According to the meeting’s agenda packet, Prop 6 would require the state Legislature to submit any measure enacting specified taxes or fees on gas or diesel fuel, or on the privilege to operate a vehicle on public highways, to the electorate for approval.

City Manager Bill Avera said Hollister would receive about $650,000 next year through SB 1.

“It’s a very critical component of what we do here to try to maintain our roads as best we can,” Avera said.

If approved by voters in November, Prop 6 would halt future transportation improvement projects, according to the agenda packet. Among those projects is chip sealing work on portions of Fifth and Seventh streets. According to CalTrans, the work involves applying asphalt binder on existing pavement followed by a layer of aggregate chips. The aggregate is then rolled to embed into the binder. The treatment lasts from five to 10 years.

Hollister resident and City Council District 4 candidate Marty Richman said he will not support Proposition 6, but he thinks the city is not getting enough from SB 1.

“I hope that the councilmember  [Luna], when she goes to the League of California Cities, will say something about the fact that although some of our people are not supporting Proposition 6, they are angry about not getting a fair amount of money out of SB 1,” Richman said.

SB 1 is shaped to support public transportation, mostly railroads, Richman added. California, he continued, takes 66 cents of the dollar before anything else and allocates more money to cities that have a railroad and large population.

Hollister has no railroad and a small population, Richman said, so it isn’t getting a fair share even though there are 951 registered vehicles for every 1,000 resident in San Benito County, while San Francisco has 500 per 1,000 residents.

Hollister resident Kevin Stopper said he agreed with the council’s opposition to Prop 6 because the city needs help in maintaining the roads.

Councilman Jim Gillio, who is running for San Benito County Supervisor District 4 against incumbent Jerry Muenzer, said the city needs the sources of funding for road repair because  the projects that are in process are a combination of SB 1 funds and city general funds.

“The unmet need over the next 40 years is somewhere around $700 million,” Gillio said, who is also on the board of directors of the Council of San Benito County Governments (COG), the regional transportation agency. “When we’ve taken any possible measure, we take in SB 1 funds those all close that unmet need gap so we can get our roads up to an acceptable level.”