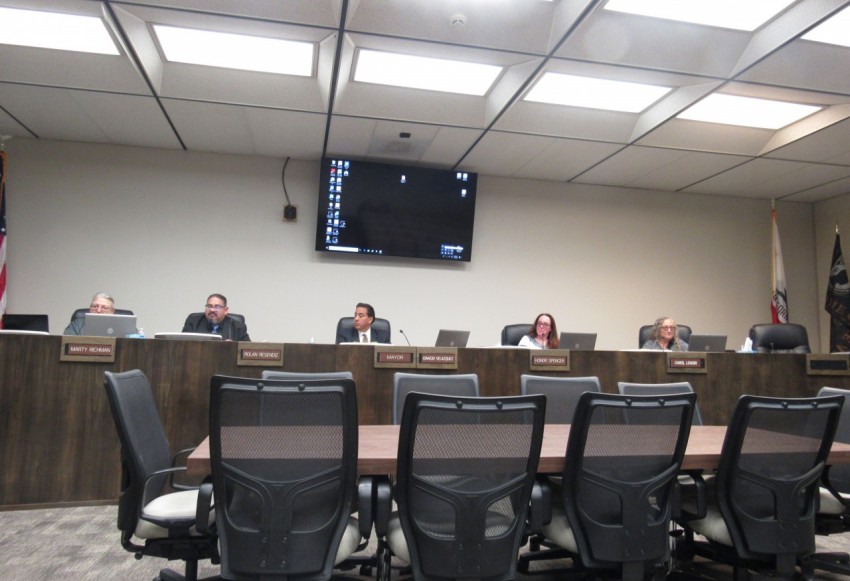 The Hollister City Council at its Jan. 14 meeting. Photo by Noe Magaña. In an effort to complete more work, the Hollister City Council will now meet three times a month instead of two.

The council approved the change with a 3-2 vote at its Jan. 14 meeting. Mayor Ignacio Velazquez and Councilman Rolan Resendiz were opposed.

City Manager Bill Avera is expected to present an item to the council that changes the municipal code to reflect a meeting on the first, third and fourth Monday of each month. In the meantime, the council will hold three meetings a month, with one designated a special meeting until the code change is approved.

Mayor Velazquez said he opposed the change because it would force staff away from projects to prepare for the extra meeting. That included, he said, department heads who need to be present during meetings. Instead, he proposed to focus on committees to make sure projects are completed.

“We all want to get things done, that’s why we are here,” Velazquez said. “But by putting additional stress on the staff we are going to find less information given to us at the end.”

Resendiz said he didn’t mind having three meetings a month, but pointed out the council will have three meetings this month as well as next month anyway.

“If we add another meeting that means we are going to have four meetings in February,” he said.

The city website states there are two council meetings scheduled in January and three in February with a special meeting on Feb. 11.

Councilwoman Carol Lenoir said staff would have to prepare for meetings whether they are special or regular. However, she said it was more beneficial for staff to have set dates for when meetings will occur in order to better organize their schedules.

Marty Richman, who was elected vice mayor on a 4-1 vote earlier in the Jan. 14 session, originally proposed the change during his first meeting as a councilman on Dec. 17. He said at the time he wanted to deliver on his promises during his election campaign by completing as many projects as possible.

Velazquez seemed to agree with Richman’s proposal at the Dec. 17 meeting, adding that the first meeting of the year needed to be about the city’s finances.

“As Mr. Richman pointed out we are in need of a few more meetings and a lot of deep conversations,” Velazquez said at the time.

Richman noted that there was no rotation specified in the city municipal code and that he would rather decide through a nomination and election process.

The mayor’s nomination of Spencer failed 3-2 with Spencer, Richman and Lenoir opposing.

“You guys want to break up the rotation. Okay. Interesting,” Velazquez said.

The council also appointed Kevin Henderson (District 1) and Roxanne Stephens (District 4) to the Hollister Planning Commission. These came after discussion regarding the planning commission’s bylaws, which have not been formally adopted.

Velazquez suggested waiting on the nominations until the council approved the bylaws at its Jan. 22 meeting, but Lenoir and Richman did not see a problem with continuing the process without the new bylaws.

“We are making this more complicated than it needs to be for no reason,” Richman said.

He added that if the council can’t do anything without bylaws then the commission might as well be dissolved.

Resendiz could not nominate his candidate for District 2 because the removal of the existing commissioner, Pauline Valdivia, was not on the agenda. He is expected to make his nomination at the Jan. 22 meeting if the Planning Commission holds a special meeting to adopt the bylaws.