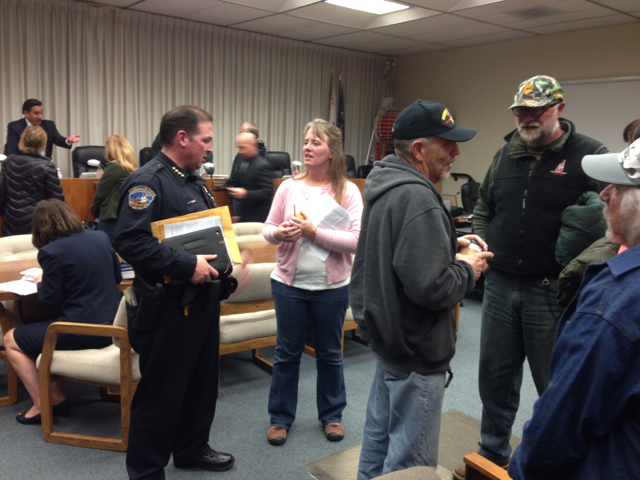 Ashley Sand, mother of four children, spoke about the recently started Neighborhood Watch program in the Whale Park neighborhood which she said has had 50 families sign up for the Neighborhood Watch program in that area. She said they were wondering why they couldn’t put signs up saying telling people they were being watched. She said that the neighborhood is ready to take their streets back and that if the neighbors get together, those causing the problems will move on. She told the council that, “it is not okay for her children to encounter trash and condoms when they go to get the mail.” and, “ it will be a big thing when people start seeing the signs going up.” “People in the neighborhood want the park to be safe without their kids seeing condoms and needles.”

Councilmember Victor Gomez commented that he believed that this was just part of the plan that Chief David Westrick has set out in regards to community engagement. He complimented the Chief in his successful efforts to engage the community. He noted the need for people to take back their communities and to re-engage with their neighbors.

Councilmember Ray Friend noted his experience in the past with the program and that it is an important way for people to get to know one another to improve communication in the neighborhoods.

Councilmember Pauline Valdivia spoke about the opportunity to renew the program and offered her assistance in her neighborhood.

Mayor Ignacio Velazquez noted that several neighborhoods are pulling together and that this was what is going to make a difference. He said his goal was “to make sure that the police have time to go to the donut shops.”