Idaho-based Hawkins Companies to build 130,000 square foot shopping center in Hollister, with ground breaking possibly in next two months, according to city manager. 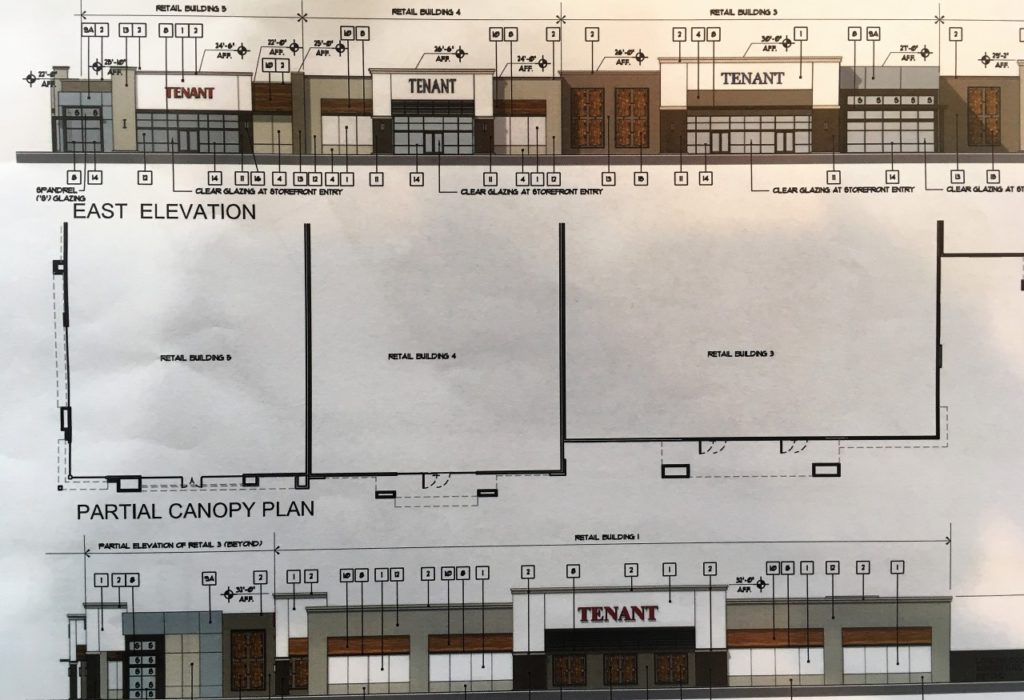 The Hollister City Council approved the final hurdle March 5 concerning Hollister Farms, the location of the long anticipated new shopping center on what was once an orchard at the Gibson family farm. The council approved the housecleaning details, as it were, of securing, on paper, easement rights with PG&E and Southern Pacific Railroad, as well as tree planting on the property along Highway 25 north of Les Schwab Tires in Hollister.

Hawkins Companies Commercial Developers of Boise, Idaho, spearheaded the development of the 130,000-square foot shopping center. According to the preliminary site plans filed with the Planning Department, the project to be called Hollister Farms, will include nine large retail businesses, ranging from 6,000 square feet up to 30,000 square feet, along with possibly 25 or more smaller stores, and six fast-food restaurants.

Shopping center may bring major retailers to Hollister in 2018

Last May, Mayor Ignacio Velazquez revealed on Facebook that there were two confirmed occupants, T.J. Maxx and Petco. At that time, he also said Panera Bread and Wendy’s were still in negotiations. It was thought that work would begin as soon as Oct. 2017. City Manager Bill Avera projected annual retail sales taxes could amount to as much as $900,000 and provide up to 130 local jobs and he confirmed March 12 those figures are still accurate.

Avera told BenitoLink March 12 the PG&E easement approval involved moving the point where the company could provide utilities to the new development. At this point, he said, no utilities are actually being moved. He described it as a “line on a piece of paper,” from its existing location on McCray Street about 50 feet into the city’s existing right-away. He said when utilities are needed they can be installed at the new easement.

As for the railroad, Avera said the tracks along McCray at one time ran all the way to Tres Pinos. He said all the tracks south of Park Street were removed years ago.

“On paper, it still exists,” he said. “When you go through title companies and escrow they want to make sure when you purchase property you actually have rights to sell, purchase and own it. It was just making sure all the documents were cleaned up so there won’t be a legal issue later about the true ownership.”

As Hollister Farms ramps up, Rancho San Justo Middle School, located along McCray Street, will benefit to the tune of $395,000 for a new building containing restrooms, field house and snack bar by the sports fields.

“The money we got from the Hawkins Group to pay for the portion of McCray Street near the school was turned over to the school district so they can build that building,” Avera said.

Avera said escrow will close shortly on about 100 feet near the school, which belongs to the city, completing the acquisition of the entire property originally purchased from the Gibson family. He said the company has not told the city when the ground breaking will begin, but he expects it to happen within the next two months.

He said his original tax estimates and jobs figures have not changed. He said in addition, the shopping center will slow down the “leakage that Hollister has to Gilroy.”

“Those businesses going into that center will, to some extent, help some of the regular traffic on Highway 25,” he said. “If I have a T.J. Maxx in town I’m not going to the T.J. Maxx in Morgan Hill. A lot of the stores will provide opportunity for us to get off of Highway 25. The thing with the smaller restaurants will give us more options to eat in town. I think it’s a pretty positive project and once this is finished we’ll start working on the next one.”

In addition to Petco, T.J. Maxx and Wendy’s, Avera said Denney’s is possibly coming, as well as Ulta Beauty, Chipotle Mexican Grill and a pizza store similar to Pieology Pizzeria.

Jeff DeVoe, director of development for Hawkins said he could not disclose which retail stores are included in the development, stating that the company signed letters of confidentiality with some.

“Because these are publicly-traded companies we can’t disclose who they are until the deal is final,” he said.

Supervisor Mark Medina described the shopping center as a crucial element to what has become known as “smart growth” in the community, which is dependent on a mix of both residential and businesses. He said in order to attract businesses to the city there often has to be a certain number of homes before companies will consider investing there.