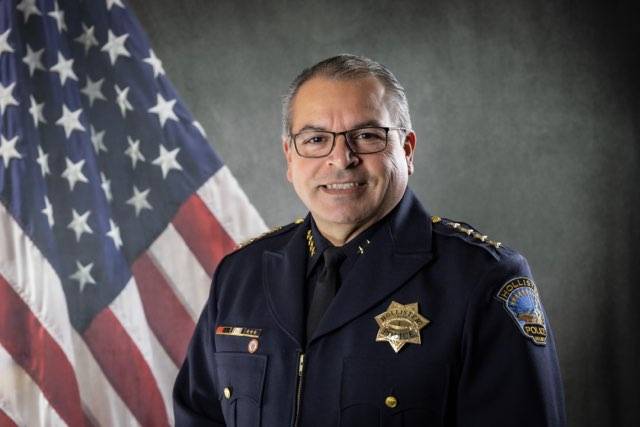 Chief Carlos Reynoso has been with the HPD over 20 years. Photo provided by Hollister Police Department.
×

His annual salary will be $202,500 with an annual consumer price index increase for an initial period of three years from June 7. It will automatically renew on the anniversary date of June 7. His compensation package includes standard city benefits: vacation, sick leave, administrative leave, retirement and pension system contributions, holiday, disability, dental, medical and life insurance, and all other benefits afforded to any executive management employees of the city, including the use of a vehicle.

He will also be permitted to seek outside employment by engaging in instructing, writing, lecturing, and consulting, as long as they do not conflict with his duties and obligations as chief of police. He cannot, however, undertake employment as a paid consultant within San Benito County, except with the consent of the city manager.

When City Manager Brett Miller introduced the resolution for consideration, he said the due date for applicants was extended in order to build a pool of qualified candidates. He said the interview process consisted of two panels. The members of the panels were not disclosed.

Miller told BenitoLink, “We had an expert panel made up of police chiefs from neighboring communities and a community panel made up of members of our community.” He also said there were six applicants, but declined to name them or which police departments they came from.

After Reynoso’s appointment there was agreement among the council members that the matter of his compensation would be brought back at a later meeting during the closed session.

“We had a very fair, transparent process that involved the public and he’s from Hollister and we’re very fortunate to have him,” said Councilman Rolan Resendiz.

During public comments, former Councilwoman Carol Lenoir said Reynoso was always her first choice after former chief David Westrick retired in January 2020. She recalled that Westrick and Reynoso had competed against one another to become chief.

“I was always impressed with your class, the way you handled that, and what a team player you were with Dave,” she said. “You’re well experienced and you will bring the much-needed diversity that we need in our community.”

Resident Elia Salinas said Reynoso was a good example to the local Latino community that they can be successful in the town they grow up in.

Reynoso’s contract with the city includes a clause that defends him and holds him harmless, and indemnifies him against “any tort, professional liability claim, or demand, or civil rights, or other legal action, arising out of any act, event, or omission occurring in the performance of his professional duties as chief of police, unless his actions are the result of gross negligence or willful misconduct.”

Reynoso told BenitoLink his family moved to Hollister in 1976. He worked at his father’s store from boyhood through adulthood.

“I attended local schools and graduated from San Benito High School in 1987, before attending Gavilan College and eventually California State University Sacramento,” he said. “I eventually graduated from CSUS with a BA in government.”

He later attended the South Bay Regional Public Safety Training Consortium as a non-affiliated cadet, meaning he had no promise of a job at the end of training. He was hired by the Hollister Police Department in 1998.

“It is a great honor to be offered this opportunity to lead this department,” Reynoso said. “I have dedicated my law enforcement career to this department and the members of this department.  I believe we have a fantastic group of individuals that do amazing work despite being understaffed and often overworked.”

Reynoso has been married for 23 years and has three sons, ages ranging from 14 to 22.