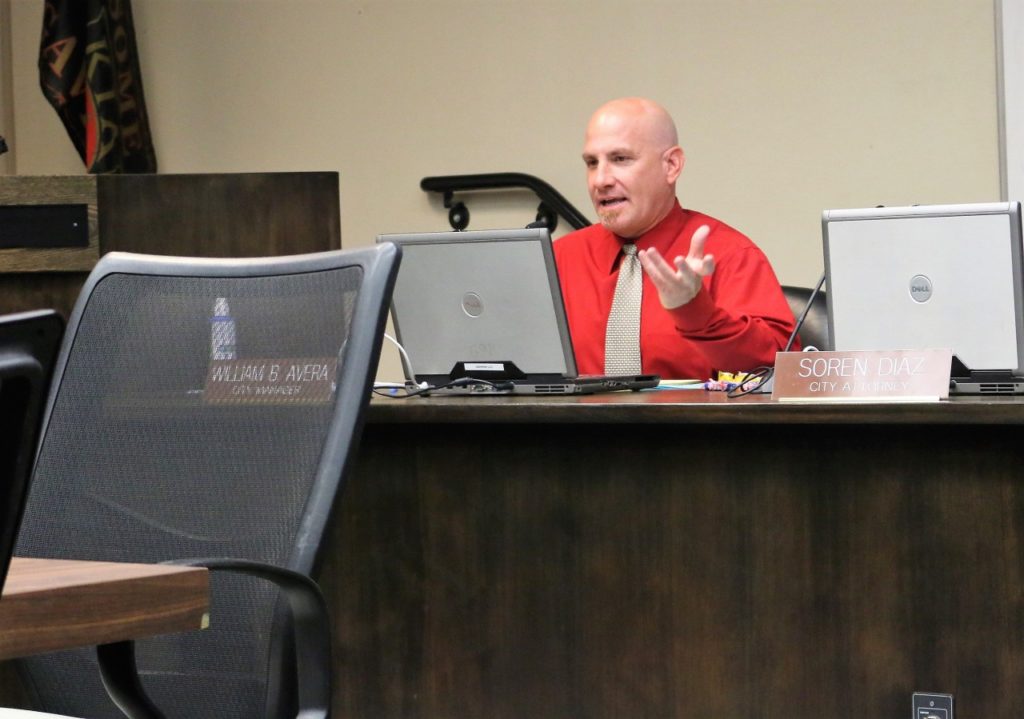 Bill Avera said the city employee will need to be familiar with cannabis law, city ordinances and working with council. Photos by John Chadwell. The Hollister City Council approved a resolution Oct. 16 to adopt a job description and salary range for the position of cannabis affairs manager. What could have gone by without discussion because it was included in the consent agenda to be approved en masse, instead evoked an informative discussion when resident Marty Richman took the opportunity to oppose hiring a person to monitor the burgeoning marijuana industry in the city.

While Richman did not oppose hiring someone for the planning department, he did object to hiring a person to deal exclusively with cannabis. Instead, he suggested the position be included in regular planning services. He rationalized that other categories of businesses that annually generate as much as $8 million in revenue for the city and state don’t have a single city employee monitoring them.

“This is no way to run a city that has so many functions. We need the flexibility to move people around to the work needed at any particular time,” he said. “If cannabis is going slowly then they should be able to do something else. They should not be sitting around looking for trouble in the cannabis industry.”

He said any person with the title of cannabis affairs manager might rationalize that their job depends on keeping the cannabis industry going.

Mayor Ignacio Velazquez brought up the idea of contracting the position out to a service with the background in cannabis management. City Manager Bill Avera reminded the mayor that the council had charged city staff with the task to “make this industry as good as it possibly can be.” He said a city employee whose main focus was managing the cannabis industry would be part of the development services department, coordinating the planning, building, fire, code enforcement and police liaisons.

“You’re talking about permitting 90 businesses that do require to be monitored on a regular basis,” he said, adding that unlike gas stations, for instance, which are regulated by a number of agencies, the cannabis industry is regulated solely by the city. “Originally, Brett (Miller, administrative services director) and I had talked about having this as a contract employee. We wanted to be able to have a way out. But we think with a mid-management bargaining group, in that if the revenues don’t continue to generate at the rate we believe they will, we have a provision for that position.”

Avera stressed that it is important for the council to have someone on staff that they can go to and who can keep current with ever-changing cannabis laws. He said no one knows what will happen when the adult-use marijuana state law goes into effect.

Councilman Karson Klauer wondered how difficult it might be to fill the position if there is a provision in the contract regarding the possibility that the cannabis industry might not be as robust as envisioned. He reasoned that as opposed to serving business categories that have existed for decades, would someone be willing to take on a job monitoring an entirely new industry that might not be around in a few years. Avera said it was likely, but added that they did have the ability to designate the job as a contract position. He reminded the council the city would have to pay a contractor more. He also pointed out that a contract person could be terminated at-will, whereas if the position is filled by a city employee, he said there could be a provision that revenue would have to decrease to a predetermined level before they could be laid off.

“We can set the bar high enough where people should feel relatively comfortable about taking the position,” Avera said.

Klauer asked if there were a spreadsheet with timeframes for projected revenues related to the position. Avera told him that from just cultivation businesses the council had already estimated the city will receive approximately $1.26 million. He said the council will soon be approving a regulatory permit fee that each company will have to renew annually. He said there are presently five projects that include major greenhouse components, one being over 4-million square feet, which would be assessed annually at $7 a square foot.

Klauer asked Avera if the city had an equivalent position already in the development services department. Avera laid out the existing positions and Klauer asked if the new position would be comparable to a planning manager. Avera told him it would and then Klauer suggested it would be good to have a secondary role for the position to avoid having someone “twiddling their thumbs if it doesn’t go swimmingly.”

Avera said the person would not only have to keep up with cannabis regulations, but it would be a major planning effort, as well, because the person would be going through the CEQA process and tentative map and architectural approvals with the council. Klauer questioned if there would be enough work for the person after the initial phase of setting up the businesses.

“There will be enough work if we’re going through the facilities, making sure that things are being monitored correctly. There will be plenty of work for one person,” Avera assured him. “They’re coordinating the efforts of eight other people. I can tell you right now it’s been a full-time job for the last eight months.”

Klauer asked if the city were to hire an outside person how long would the contract be for. Avera said a typical contract runs three years. Councilman Jim Gillio said the job description provided enough protection for the potential city employee. He thought it important to have the position in order to provide “ownership within the city instead of contracting it out,” because of the fluidity and dynamics regarding public concern.

“I’ve never seen the public so engaged in any topic besides marijuana,” he said. “It would be a huge mistake for us not to watch this very carefully and select the right employee to monitor all of the daily changes. There’s a huge change in marijuana law and we need to be cognizant of that, and we need to have that funnel point who will be in charge of eight people.”

Councilman Ray Friend pointed out that the job description for the position that would require the person to coordinate between multiple departments was significant enough to qualify as a full-time position. He envisioned the individual would be spending much of their time in Sacramento dealing with changes regarding adult use of marijuana.

“We’re actually late in providing this service,” he said. “We should have done this six months ago.”

Councilwoman Mickie Luna agreed with Friend and pointed out that there is a rush to hire people for similar positions at the state level.

“We don’t want to be so late that everybody gets hired at the state level and we may have a problem locally,” she said. “We’re on schedule and we just need to move forward.”

Avera concurred that the city is somewhat late in moving to hire a cannabis manager and emphasized that the person needs to have experience in interpreting municipal codes and understands what the city council wants from a policy perspective rather than the cannabis industry’s. Councilman Ray Friend made a motion and Councilwoman Luna seconded the motion. The resolution passed unanimously.

The council passed resolutions for street closures on Oct. 21 of East Street for the A&W car show and Severinsen & Velado Streets for a Halloween block party on Oct. 31. Another resolution passed for the council to accept bid proposals to award the contract to Betshcart Inc., and to authorize the city manager to execute the contract to upgrade the waterline along Victoria and Park Streets.

A resolution was passed to adopt a job description and salary range for the position of payroll manager.

The council declared Oct. 22-29 as LULAC Week. Cesar Flores accepted the proclamation honoring the organization on its 30th anniversary.