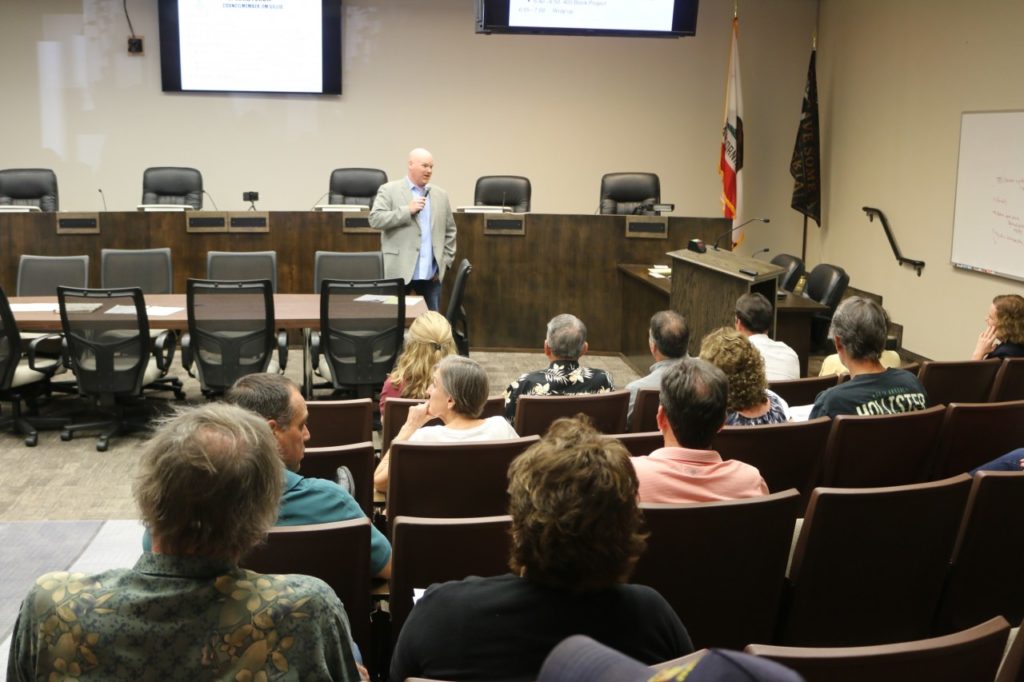 Being the newest member of the Hollister City Council, Jim Gillio felt he needed to know more about the history, plans and controversy concerning the 400 Block, located on the corner of San Benito and Fourth streets downtown. He also wanted to give the public the opportunity to learn along with him, so he asked city staff members to give presentations on the various aspects of the site, and invited residents via social media to come to the July 7 meeting. Knowing that many might not be able to make it to the meeting, he live-streamed it. Later, he said some 500 people viewed the streaming event.

“I believe in full transparency and I personally fielded many questions about this project from community members who wanted more information,” Gillio communicated via email. “I researched this topic thoroughly and through this research learned a lot about RDA (Redevelopment Agency), successor agency (SA), and the requirements and potential costs and liabilities if the city did not dispose of the property left over from the RDA and SA.”

Gillio published the results of his research on social media He said, however, that he thought it would be better for residents to hear from the experts from Hollister Downtown Association, San Benito County Chamber of Commerce, and the San Benito County Business Council, all of whom have voiced support for the project.

“They are the experts on the downtown and what is needed to restore our downtown,” he said.

Mayor Ignacio Velazquez was not at the meeting. His presence, though, was felt as the presenters often referred to the controversy that has arisen because of his public comments on Facebook in opposition to the city council’s decision to develop the site, which has remained vacant ever since the 1989 earthquake that damaged some 30 businesses to the extent they had to be razed.

Absent follow-up questions or public comments after the presentations, the topics were filled with facts and figures, minus any emotional statements that have been abundant on social media in response to the mayor’s many pleas for support for a referendum to set aside the council’s decision to develop the land.

At the meeting, Gillio told the audience why he called for the presentation that would cover both the history of the 400 Block and why the city had to dispose of it, along with a housing update within the city.

It has been Velazquez’s contention that the public has had no say in the housing or downtown developments. Maria Mendez, city assistant planner, countered that the public has consistently voted for measures that determined how, and in what form, growth would take place.

She told the audience that in 2002, the public voted for a Growth Management Measure U that restricted developments to 244 units a year, which, at the time, was considered a healthy, steady growth rate of 2.5 percent. In 2008, voters approved Measure Y that allowed mixed-use units downtown and would be exempt from Measure U. The 400 Block was included in that area.

Mendez went on to say that under Measure U, the city could build up to 976 units today.

“As of today, the city has only done about 471 units, which means that we’re not even at the cap under Measure U,” she said, adding that the city is not building haphazardly, but is guided by several master plans to help sustain and control growth, which has never been met. “In 2016, there was about 143 homes completed and 195 under construction. In 2017, 21 of those where completed and another 192 were under construction.”

Lynn Hutchins, an attorney with Goldfarb & Lipman LLP, who was formerly with the RDA, gave an overview of the redevelopment program and its relationship to the 400 Block. She said that in 2011, there were 460 redevelopment agencies in the state that were created to take control of “blighted areas” that needed infusions of investment to spur new development and growth within communities.

“Growth and property taxes in those specific areas—including the 400 Block—after the adoption of the redevelopment plan is called tax increment, which was allocated to the RDAs to spur the redevelopment project areas,” she explained. “The property taxes would be used to upgrade the areas and eventually when the RDAs were dissolved would go back to the other taxing agencies.”

“The successor agency’s sole job is to wind down the RDA,” Hutchins said. “Collect enough money to pay off the debts, finish up any projects that have an enforceable obligation, and dispose of the assets (i.e. the 400 Block).”

She said an oversight board oversees the successor agency. The board is made up of members of the taxing agencies. In the case of the 400 Block, those are San Benito County, Gavilan College, Hazel Hawkins Hospital, school districts, San Benito County Water District, and the County Office of Education. There is also an employee representing the former RDA on the board.

“Their job is to approve everything the successor agency does, including directing the disposition of the assets the agency holds,” she said. “The county auditor-controller distributes the money to either the successor agency to pay debts or the effected taxing agencies. Then, the California Department of Finance is the arbitrator of everything. There is no appeal from them unless you decide to go to court. It’s a pretty inflexible regime, at this point.”

Hutchins explained that all properties must be sold as soon as possible for maximum value, which Velazquez said was not the case as he sought voter signatures for a petition to stop the sale and development of the parcel.

“It’s basically putting the former RDAs and successor agencies in a fire sale situation,” Hutchens said. “This is probably not the best way to reap as much value as you can out of properties.”

She said the legislature re-thought the strategy and came up with a plan that dictated the RDAs and successor agencies had to pay the state in a way that resulted in Hollister having to come up with $6.9 million.

“The requirement that is critical for the 400 Block is you have a process for how to dispose of properties, which is called a long-range property management plan,” she said. That plan went all the way up to the State Department of Finance, which added a stipulation that the successor agency had to enter into a compensation agreement with the taxing agencies before the 400 Block could be sold. The Department of Finance approved the plan February 2014.

“In your case, the city was allowed to retain certain properties for future development, which is exactly what is going on with the 400 Block,” she said.

After the presentations, Gillio said he thought the staff and Hutchins answered most of the questions from those who attended. He remained outside for almost 45 minutes answering more questions.

For more information on the successor agency and all the developments concerning the 400 Block and other assets, visit its website.