The company has its products in 160 cities worldwide and wants to bring a fleet of up to 100 to Hollister to reduce car traffic and carbon emissions but council’s questions showed caution. 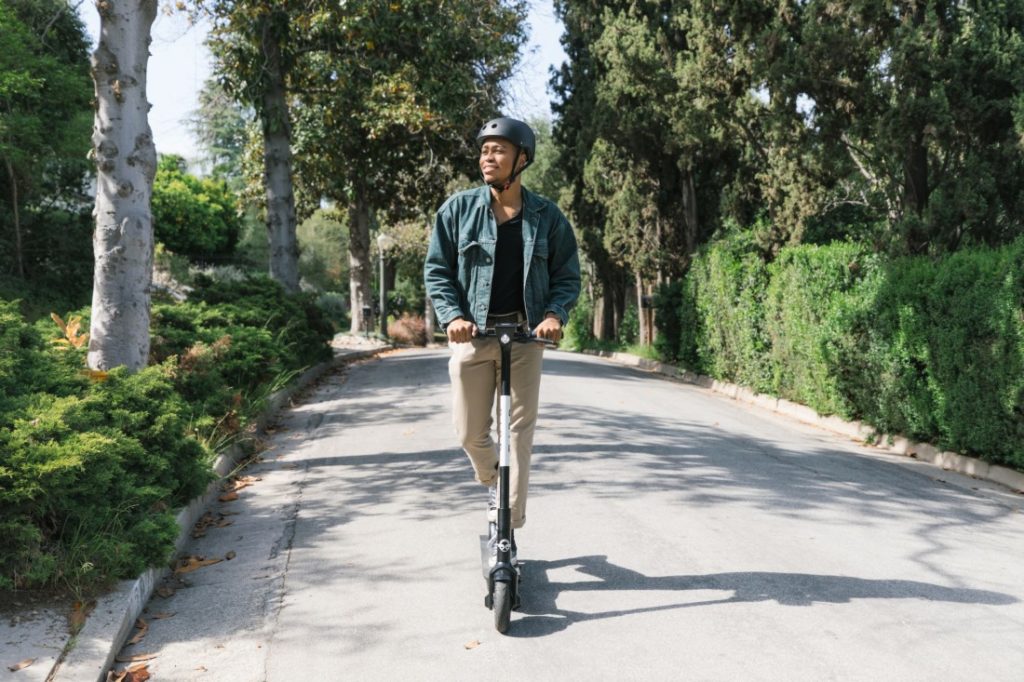 The Santa Monica-based company is proposing a pilot program for Hollister with 100 e-scooters. Photo courtesy of Bird.
×

Hollister residents were offered another way to get around downtown recently. Santa Monica-based Bird, the manufacturer and marketer of the Bird electric scooters, appeared before the Hollister City Council May 17 making available 100 or so machines parked around town. Promoted as an eco-conscious scooter, it can be purchased online or at the local big box store. But if Bird is successful with the City of Hollister, residents may be able to simply pick one up at a handy stand .

According to the city’s agenda, “Bird can bring micro mobility to Hollister, which will not only serve as an alternative form of transportation to help our citizens, but also bring in revenue to the city.”

Singleton said Bird’s mission is to make cities more livable and to reduce carbon emissions by providing an on-demand fleet of bikes, scooters and adaptable vehicles for those with disabilities, that can be rented through a phone app or docking mechanisms. He said the scooters and bikes are used an average of three times a day and the average trip is 1.2 miles.

“This is important because that is the distance it becomes more accessible to utilize one of these vehicles and more convenient, and that’s where you start replacing car trips,” he said. “We partner with government communities to do revenue sharing, so we pay an upfront fee, and we do a per-ride fee that we share with jurisdictions.”

Singleton said in San Jose the fees have been used to pay for more dedicated bike lanes. He said the company will provide the city with a data dashboard that can track the entire fleet. He said local fleet managers will be hired from within the community.

“Typically, we’ll hire a couple of fleet managers,” he said. “In a city the size of Hollister that would be two or three folks. Then we license out a small micro-fleet of scooters. These on-the-ground folks have the local knowledge where the best places are to park the scooters. They can also respond to complaints about improperly parked [scooters] quickly.”

Singleton told the council he was presenting the pilot program for their consideration and the company would work with city staff to determine core transportation zones, as well as no-park and no-ride and slow-ride zones.

“The core thing about the pilot program would be to do a proof of concept, take lessons learned, and then reapply for a larger program down the road,” he said, adding that the scooters can generate revenue and be self-sustaining without any public subsidy. He said the company would conduct workshops and outreach so the public would know how to safely ride the vehicles and not cause issues by leaving them in inappropriate places.

Councilman Tim Burns asked if there is any data regarding the number of accidents the scooters were involved in and how many hospitalizations resulted from those accidents. Singleton said the data would depend on the city. He said studies show that the Bird scooters are no more unsafe than any other scooter. He said any rate of accidents would be similar to those involving bikes, which are being encouraged as cheap and environmentally clean.

Singleton noted that the company requires riders to be over 18 and they need to wear a helmet. He said when they download the app, they are often required to take a photo of themselves wearing a helmet as well as taking a photo of their government-issued ID card. However, he said neither Bird nor the city are held liable for accidents because riders agree to a waiver.

“The number was less than 5,000 in 2014, before the convenient, environmentally- friendly vehicles really took off,” said Dr. Eric Wagner, director of upper extremity surgery research at Emory University, in Atlanta.

Singleton also said the company has a division that focuses on medium- to small-sized cities. He said with its fleet manager model it can service a city of any size. Council member Rick Perez questioned the concept of “dead birds laying all over the place” as scooters are abandoned around town. Singleton said the technology exists to designate no-parking zones that will set off an alarm should a scooter be left there. And with the fleet manager plan, there will be local people who can respond within 15 to 30 minutes to complaints of abandoned scooters.

He said that between the technology and fleet managers, scooters would either be parked in certain areas or would be picked up quickly.

Councilman Rolan Resendiz also wondered if theft was an issue. Singleton said the scooter design required proprietary tools to unlock or perform maintenance, so it would be difficult for someone to steal one. The scooters also have the technology to let the fleet managers know that they are out of their zones or if it is moving and no one is riding it. He said the fleet managers are financially motivated to investigate and recover the scooters.

According to an article in Electric Scootering, because phone apps are most often the way people rent e-scooters it’s unlikely someone using the app will steal the scooter. Also, most e-scooter wheels lock and can only, for the most part, be unlocked by using the app.

Going forward, City Manager Brett Miller told BenitoLink the city will be in discussions with Bird to be clear that the city cannot be held liable. There is no date scheduled yet for Singleton to return to the council.