Tenielle Ramirez said people need to put down their cell phones and do small things for other people. 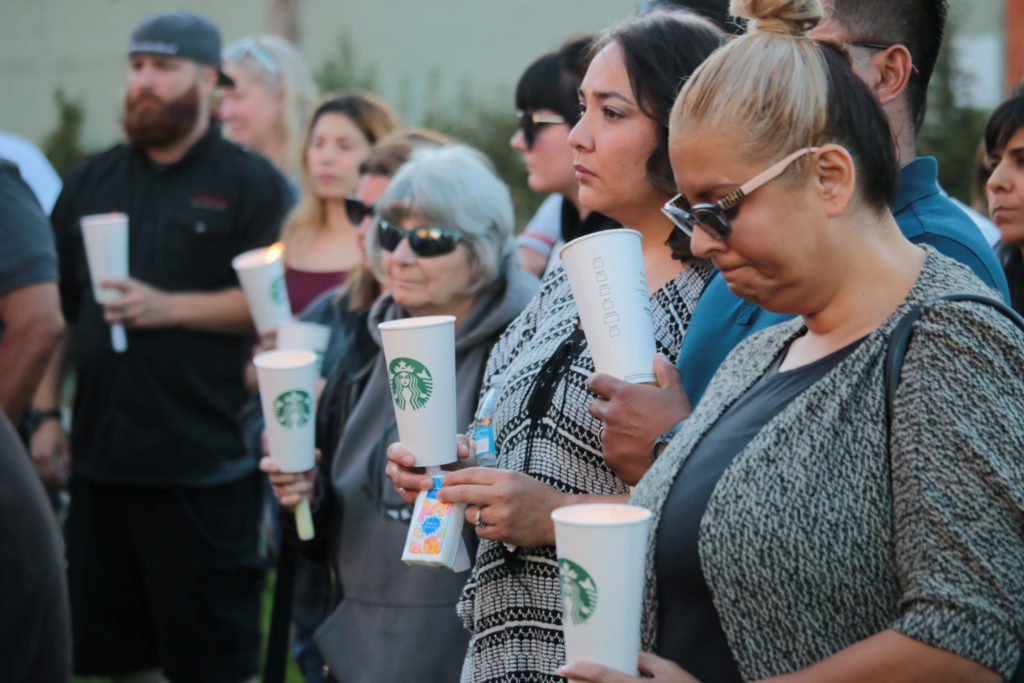 Hollister residents came together downtown on Aug. 1 to pray and speak regarding the Gilroy Garlic Festival Shooting. Photos by John Chadwell.
×

For decades, Hollister and Gilroy have competed on the high school football field for the highly-prized annual championship. But on the evening of Aug. 1, tragedy, compassion, and a love for football brought people to the 400 block of downtown Hollister for a heartfelt vigil in remembrance of those who died or were injured in the Gilroy Garlic Festival shooting on July 28.

Oscar Ceja, president of the San Benito County chapter of the Niner Empire, said local member William Long suggested the vigil be held to bring Hollister residents together to show their support for Gilroy.

“This hit home for me because I grew up with his dad from kindergarten to high school,” Hernandez said, “and this connects with us because Alberto’s a big-time 49er fan and we’re family. We went to science camp and Washington, D.C. together, and Stephen won’t be able to experience all the things his dad did growing up.”

As the word spread about the vigil on Facebook, local Millie Valencia volunteered to help. She called Starbucks, which donated 600 cups to the vigil, and Dollar Tree, whose employees chipped in to buy candles.

“It brings me so much joy that the Hollister community is that strong and I’m proud to be a part of this community,” Valencia said. “This hit me hard because I have a six-year-old grandson and a six-year-old was one of the victims. It hurt me terribly and even though I was born and raised in Hollister, we are still a close-knit community with Gilroy.”

Matt Kirkland, campus pastor at South Valley Community Church in Hollister, said the vigil was an opportunity to bring the community together to show its strength and enable the community to “defeat the works that have been going on to tear apart the core of who we are, to say you can’t even go out of your house anymore to get together. This is showing them we’re not afraid.”

San Benito County Supervisor Jaime De La Cruz spoke at the vigil and told attendees that when he first heard about the shooting, he thought it must have happened in New York or somewhere else. He said he never imagined it could be in Gilroy, where friends and family members were attending the Garlic Festival.

“I was buzzed for a while and my wife asked why I wasn’t reacting,” he said. “That was because I was in shock. I couldn’t believe it was happening in our own backyard. We have some heroes out there, the first responders. If it wasn’t for them more people would have been shot. It probably could have been a neighbor, a cousin, a friend. I want to thank the first responders and everyone else who volunteered to help. In our darkest moment we have joined together to rally against evil.”

Supervisor Peter Hernandez said he knows residents and the business community are coming together in support of those suffering from the tragedy. He encouraged people to buy Gilroy Strong t-shirts to support the victims. Shirts sold by CAL Silk and The T-Shirt Place have all proceeds going to victims.

“We want to share the message that Gilroy is strong and San Benito is ready to support and encourage Gilroy,” he said. “Every one of us, I would imagine, have some connection to families or friends in Gilroy. We can’t let this fester in our hearts and we need to respond and overcome evil with good.”

Tenille Ramirez told the group that the magnitude of the tragedy didn’t hit her for a few days.

“I kept pushing it out of my mind because it was too much to think about,” Ramirez said. “But I woke up in the middle of the night thinking about the families. I’ve been a teacher here in San Benito County for 18 years and I’ve noticed over the years the detachment that kids have. I think about the families, but I also think about that young man who did something so horrific because he was angry.”

She went on to say it’s not just the kids who are disconnected, as everyone is caught up looking at their cell phones. She wondered what she, as just one person, could do to change things.

“I see it in my own household with our cell phones,” she said. “From now on I’ve got to stop and look at my neighbor. You can be an example and do small things that make a big difference, like making dinner for your neighbor because the mother has been ill; offering to take little Johnny to practice because mom and dad work out of town and have to deal with the crazy traffic coming back to Hollister.”

William Long, who suggested the local Niner Empire chapter hold the vigil, spoke to the group “as a father and a resident of Hollister.” He said it was a hard night after the shooting, thinking that others had lost loved ones. He said his own children could have been at the festival that day.

“I can’t imagine what the fathers and mothers are going through who have lost their children as their lives were taken from them,” Long said. “I couldn’t concentrate at work and I got with the members of the Niner Empire and the community to show Gilroy that we stand behind them. This is a painful experience that will take a long time to heal and we are there with them. They’re in our hearts and prayers. Gilroy Strong!”

The Gilroy Foundation and Silicon Valley Community Foundation have established a charitable fund for the victims of the Garlic Festival shooting.