Ignacio Velazquez says he will sue city over 400 Block and that officials are misleading the public. City and county officials do not support the mayor's story and the city manager questions his motives because Velazquez tried to develop the 400 Block 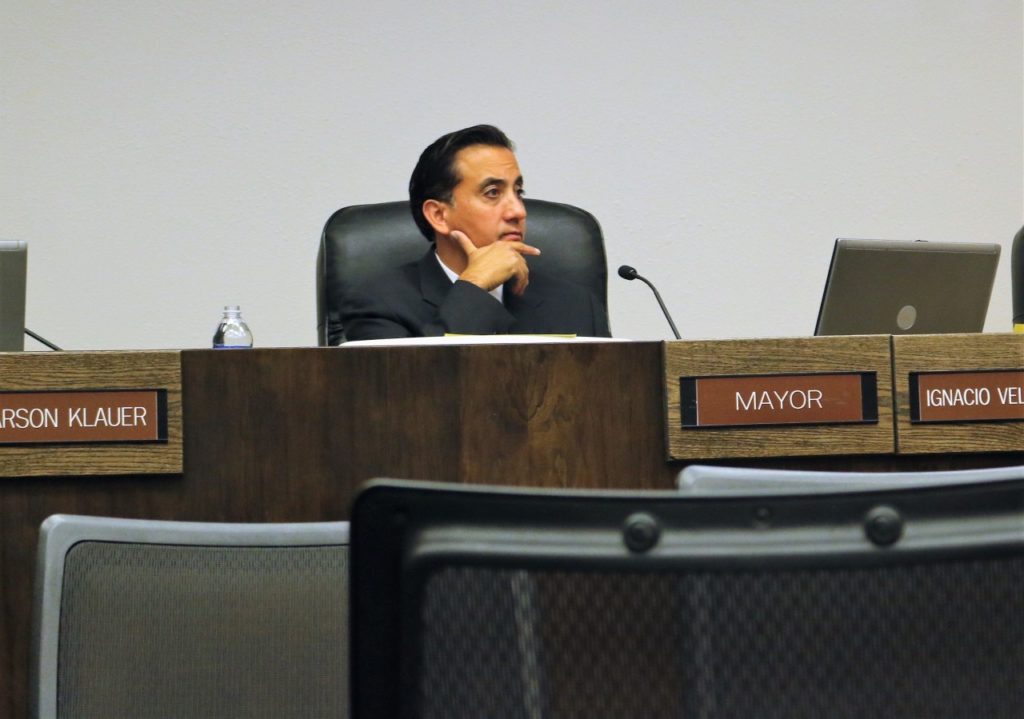 Mayor Ignacio Velazquez recused himself as other council members decided fate of petition. Hollister Mayor Ignacio Velazquez took to Facebook Aug. 30 to accuse all four city council members of taking away city residents’ rights to vote and to free speech, as well as assuring their “developer friends can make Millions of Dollars building condos on the 400 Block!”

He further claimed that each council member knew they were breaking state law by not certifying the more than 2,400 signatures on the petition he collected in opposition to developing the downtown, city owned property. In a personal plea to the populace (via Facebook), he asked them to “let the city council know that we will not stand by while our Rights to Vote is being taken away from us! How sad it is that the Mayor of a city has to sue his own city.”

But the rest of the city council views it differently.

To Councilman Karson Klauer, the only issue is the timeline for certifying the signatures. He said the city attorney told him that the mayor’s attorneys are mistaken about the timeline. He also said the city clerk is waiting for a determination from the California attorney general if the initiative qualifies as a referendum that could be added to the ballot in 2018.

Velazquez spoke to BenitoLink and explained how he believes the city council is preventing citizens from voting and from speaking against development of the 400 Block, which is adjacent to property he owns.

“By not allowing us to do this (referendum) they’re taking away both our rights,” he said. “People have been speaking out, but they’ve been muffling their voices by saying ‘we don’t hear you, we don’t care what you’re saying, and we’re not going to allow you to vote on this, and we know better.’ By not allowing the people to vote on something, you’re taking away their right to free speech.”

The mayor said of taking his fight to Facebook that he wants the people to get involved. He has recused himself from discussion and votes about the downtown parcel because he owns the building adjacent to the property. But he has regularly used the social media site to express his views away from city hall.

Velasquez said he has not filed the lawsuit yet because he wants to give the council a chance to do the right thing. He declined to give a date that he would file, but said his attorneys have advised him to act immediately because the city is stalling. He said he’s working toward taking legal action to force the city to certify the signatures on the petition.

The mayor said all four members of the council are wrong-headed in going up against the public’s outcry in opposition of developing the property, and that any one of them could, if they wanted, demand the city certify the signatures, according to state law. He accused them of playing a game by saying they’re waiting for the city’s attorney to tell them what they should do. Instead, he claimed the council has directed the attorney to find a way out of the situation, so they don’t have to allow the people to vote.

Velazquez said the county clerk has already certified the signatures and that the issue should be on the agenda of the next meeting. He accused the council of falsely stating they don’t know that the signatures have been certified and they will conduct their own count. He said the city cannot conduct its own count.

“It’s done and they can’t do a recount,” he said. “All they can do is certify it and then ‘we’re going to either have an election on this issue or we’re going to rescind our decision.’”

He also said the city’s claim to be waiting for a determination from the state attorney general’s office on if the issue qualified as a referendum is just a delaying tactic. He said either a majority or all of the council are conspiring against the people and that discussions on the topic should not have been held in closed sessions, but out in the open for the public to hear.

Velazquez said the county clerk certified the petition July 27, and that there were a significant number of verified signatures to move the initiative forward. He said the count is done, and the city has no right to demand a second count.

According to Soren Diaz, city attorney, the city clerk has 60 days (not counting weekends) from July 11 to certify the signatures and that a sampling had been taken by the county showing the number of valid signatures was 95 percent to 110 percent of the number of signatures of qualified voters needed to declare the petition sufficient. Because 60 days, according to the Election Code 9115A, have not yet transpired, the council was not required to agendize or take any action.

“Our elections officer (Tom Graves) has the ability to certify and get it on the council’s agenda at that point,” Avera said.

Klauer said it’s his understanding that once the city clerk certifies the petition—he has until early October—it will be an agenda item for the next council meeting. Meanwhile, Klauer said he and the other council members are not as free to discuss the issue as Velazquez does.

“Some of it (discussion) is taking place during closed sessions and we can’t talk about litigation or negotiations,” Klauer said. “If you’re somebody who’s not in that conversation, which he isn’t, because he’s recused himself, he doesn’t have the full extent of information as the rest of us who are in those meetings. We have information we can’t discuss.”

Velasquez said, “There’s this perception by the city council that if people aren’t showing up at meetings they must not care.” He continued, “People do care. Going to city council meetings is not an easy thing to do. What I want to get out to the public is if you want something to happening, you’re going to have to start stepping up. I can’t be the only one out there. I need people to come out and express themselves. They do that quite clearly on social media. Over 2,500 people signed that petition, so clearly the public wants something done.”

He claimed the council’s conduct is wrong and bordering on dishonest.

“They’re telling people ‘we don’t care what you say,’ and that’s why it’s so frustrating,” Velazquez said. “Right now, they’re wrong and they’re absolutely headed toward dishonesty. I don’t know if there’s personal benefit or why it’s gotten to this point.

Councilman Ray Friend also said the mayor is wrong about the deadline for certification — that it is 60 days, not 30 days as he said the mayor contends. He also spoke about the mayor’s accusations on Facebook.

“That’s the way he does things,” Friend said. “He puts out enough lies and people listen to him. It doesn’t matter. They’re all lies. That’s why you don’t see any of us on Facebook. What good does it do to defend ourselves? He’s already got those people believing his lies.”

Friend said the council will take the action it deems appropriate and right, regardless of what Velazquez wants.

“It was a council majority vote and he can’t live with it,” he said.

Avera told BenitoLink that the city maintains the resolution that the city council passed is not subject to a referendum. He said this is the key component of the argument between the city and the mayor, and that it won’t go to a vote of the people if it’s not a legislative act. He expects a response from the attorney general before October. He said he understands why the mayor wants it on the agenda much sooner, but feels Velazquez is being both irresponsible and disrespectful for considering a lawsuit against the city.

“He’s one member of a council that unanimously decided to move forward with a development agreement,” Avera said. “He’s not respecting the will of the council. He’s not very respectful of his colleagues.”

Avera said if people knew the history of the 400 Block, they might not understand the mayor’s objection to developing it because he tried to do the same thing in 2001, as president of the San Benito County Arts Council.

“The mayor borrowed $35,000 from the city to develop a performing arts center on the 400 Block,” he said. “It’s a little ironic that because he wasn’t able to develop the 400 Block, he doesn’t want anything else there. A study came out that the community wasn’t of sufficient size to support a performing arts center, so he ended up making payments back to the city for years.