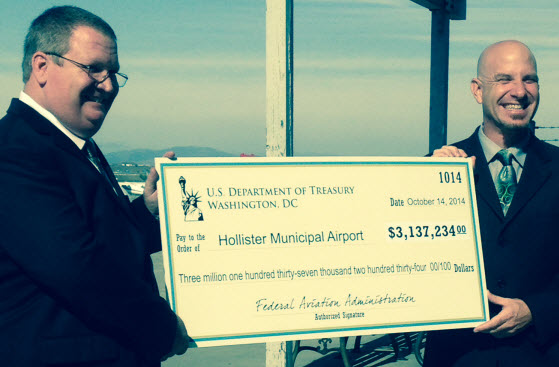 U.S. Congressman Sam Farr this week announced the award of $3.1 million to repave key sections of the runway at Hollister Municipal Airport. Farr and the City of Hollister have cooperated over the years to maintain the airport in compliance with NPIA, the National Plan of Integrated Airport Systems, under the Federal Aviation Administration.

Legislation enacted after World War II sought to ensure that airports of various categories (national, regional, local, basic) are at the ready to respond to national security threats and disasters, such as the Loma Prieta earthquake 25 years ago. After the war, the former Turner Field—a training facility for thousands enlisted soldiers including President H. W. Bush—was purchased by the City of Hollister and continues its role by sustaining a  facility for small and large aircraft alike. Local folks may see mostly historic aircraft flying overhead, yet the airport remains a viable transportation resource in service to national defense as well as business.

At the 100-year anniversary in 2012, Farr entered into the record of the U.S. House of Representatives a brief history of the airport, saying, “The history of this aviation gem is almost as old as aviation itself. It saw its first powered flight departure on April 14, 1912 from what was then a small livestock pasture … It has become a national center for historic aircraft restoration as well as home to a critical base of aerial operations for Cal Fire, the State of California's wildland fire service. It is also an important business hub. With its close proximity to the San Francisco Bay Area, good flying weather, and high quality transportation links, the Hollister Airport is poised to become a leading regional economic engine. In addition, the Hollister Airport now hosts one of the West's premier air shows” (Volume 158, Number 79 Pages E900-E901 Extensions of Remarks, May 30, 2012).

Director of Management Services, Mike Chambless, tells BenitoLink the federal dollars come from aviation fuel taxes, in large measure. To win the grant, the airport put up 10 percent from revenue earned from its enterprise leasing hangars for tenants who need these special facilities. Chambless says that “the approximately $300,000 investment produces $3.1 million worth of work. The project is a replacement of the runway expansion built in the 1990s. The asphalt in that area has failed. We have cracks averaging 2 to 4 inches in width about every 12 feet. The final step will be laying down 4 inches of new asphalt. The second phase of this project is scheduled for next year (and a $6 million grant), when the runways will be restored to brand new condition. This project makes the airport more attractive for pilots and potential business enterprises. The contractor, Don Chapin, is based in Salinas and many of their employees live in Hollister. Other local businesses will also be involved in the project.”

The ceremony was held in the hangar owned by Hugh Bickle, whose father set the altitude record for glider flight in 1961 (46,267 feet), which was not surpassed until 1986. The Schweizer SGS_1-23 glider hangs from the ceiling in Bickle’s hangar which houses other historic aircraft.

Farr spoke of the economic potential on and around the airport, in particular because of the weather that is typically free of fog, unlike airports in Monterey and Watsonville. Farr said, “San Benito County is on the rise.” Among his remarks, Farr asked the audience for a moment of silence to honor the memory of CalFire pilot and University of California, Santa Cruz science instructor Geoffrey “Craig” Hunt, who died in a crash this month while fighting a Yosemite fire. The plane he flew was based at the Hollister Airport. Click here to read the story from BenitoLink.

Mayor Ignacio Velazquez, joking that it’s not every day one gets to pick up a check for $3.1 million, recognized Chambless for his work at the airport, calling it “stunning.”  “Now we’re going to let the public know what we’re doing here.” Velazquez also acknowledged Farr for his work over the years.

The event drew to a close with the awarding of a $3.1 million check from the Federal Aviation Administration.