Self-taught, Patricia "Tricia" Harvey has taken her murals from children's bedrooms and nursing homes to trade shows in New York and Los Angeles. 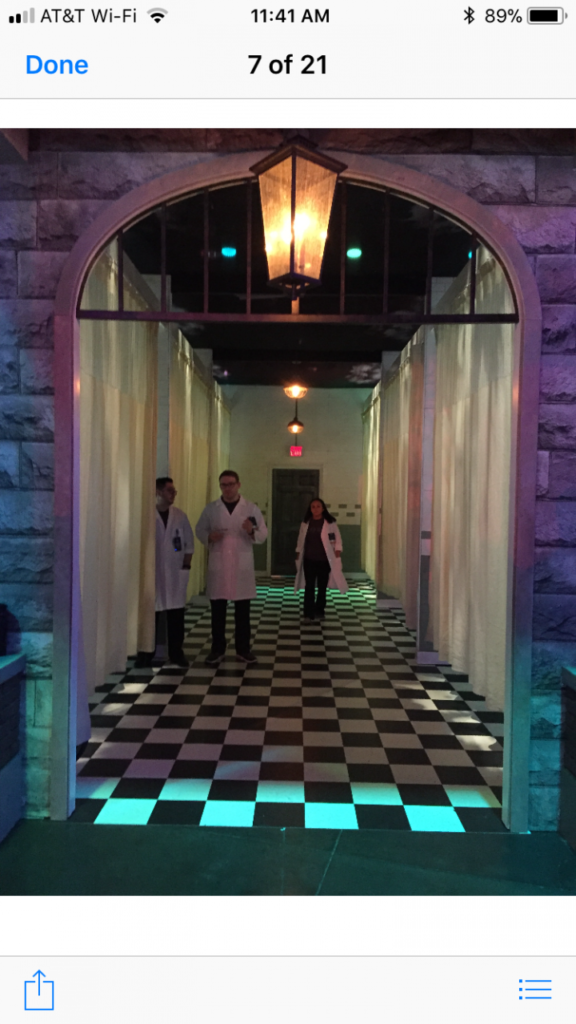 By the time Tricia Harvey was in the second grade, she already knew that she wanted to be an artist. More than a few decades later, that childhood dream is a reality and her creations can be found in children’s bedrooms, a slew of Hollister businesses, in homes from Georgia to Texas and throughout California.

Some people around San Benito County are familiar with Harvey’s etchings, murals and faux reliefs in local offices. Not that many know, however, that from her’s and her husband, Greg’s, Joshua Inn Bed & Breakfast, wondrous creations come to life with pen and ink to be transformed into landscapes, castle walls, fanciful creatures and even a bit of creepiness in an abandoned sanatorium for a Sony PlayStation video game.

Harvey describes her passion for creating something from nothing as a God-given talent because she has had no formal art training. From the time she was in high school in Georgia, she was already working as a freelance artist, creating pen and ink, chalk, and charcoal drawings for friends who became clients. Beyond these individual renderings, though, she didn’t really know how to take the next step.

As it turned out, that step did not happen until she was married and with children. It was then that she thought if she could bring to life small creations on paper, why not something a bit more bold. She painted her first mural, a jungle scene, in her children’s bedroom. Then someone who saw it asked her to do the same in their home. As word spread, she became the bedroom muralist of Atlanta.

She said the first mural she was actually paid to paint was in a bedroom where a boy had a race car bed. The mom wanted a racetrack on the walls.

“I stood in there for about two hours wondering, what the heck did I get myself into,” she remembered, “I charged her $60 to do the whole room from starting gate to the finish line where the bed was. Her neighbor up the street loved it and went out and bought the same bed and asked me to paint for her. I charged her $120, and I thought, ‘This is kind of cool.’”

Harvey thought if she was going to continue with murals she needed to have samples of her work. She would paint scenes on drywalls and after showing them to prospective clients, she would paint new murals over the old. She knew she had to perfect her style and skill, but did not think it right to be paid for practicing. So, she began donating murals at nursing homes.

“That way, they could keep it, I could practice and it was free,” she said. “Also, a lot of my friends were having babies and that would be my gift to them. I would paint murals for their nurseries.”

In this way, she developed a following, all by word-of-mouth. But in the earliest days, her art did not pay the bills. She worked in banking and as a real estate closer for many years. She said while she did OK, the business world was not what she wanted to be involved in. In 1989, she told Greg she would like to concentrate on her art. Between the two of them, they were making good money and he was hesitant, but when she insisted she wanted to take the plunge and try to make it as a professional artist he supported her decision.

For the next six years, her business grew steadily. Then Greg’s job with Wolf Camera transferred him to Texas. While they were in Texas, she kept returning to Georgia ever so often to work on mural projects. One woman's husband had three orthodontist offices and Harvey painted murals in two of them. The couple also had a home in Florida, and they asked her to paint a mural in it. And she did another mural for their daughter who had an apartment in New York.

In Texas, though, her business took off unexpectedly. One day, she drove to an affluent neighborhood near Fort Worth with 40 door-hangers advertising her murals. She got a total of one response, but that was enough. The woman who responded and Harvey became friends and her business became so successful that she hired two artists to help her. One of the projects they did together included all the princesses from Disney movies.

“Her house was like a castle, with the big turret in front,” she said, adding that the woman’s neighbor happened to be well-known character actor, Barry Corbin, who was starring in the television series “Northern Exposure.”

At that time, though, Harvey and the family were relocating to California and she ended up giving the business to her two friends and they went on to create a Texas-style mural with ranch lands, horses and buffalo for Corbin.

She said when they moved to California in 1996, it was a bit of a sticker shock for them when they began looking for a home. On the advice of her uncle, they came to Hollister. They had long thought about opening a bed & breakfast. It took them a number of years to settle on the rambling house on the corner of 7th and West Streets that they ultimately converted from a family residents to the Joshua Inn Bed & Breakfast.

Under the banner of Trish Harvey Designs, she and Henson worked together for about 10 years, until Henson moved to Texas. They still collaborate on some jobs from time to time, though. While running the bed & breakfast, Harvey cut back on her murals and faux finishes to about one project a month. From time to time, someone would call her to see if she was still painting and she would take on a project. Recently, she and Greg decided to redefine how their bed & breakfast works in order to have more personal time, get back to attending church more regularly, and to take on more art assignments.

“This last summer, I told Greg I really wanted to pick up the painting again,” she said. “It was right there waiting for me. I painted a nursery last summer for a girlfriend’s (Nicole Shelton) grand baby. Nicole is the doctor at Hollister Pediatrics. We painted her office with trees and owls in August, and we’re going to paint Dr. (Derek) Banks dental office in about a month.”

As word spread that Harvey was back in business, she not only painted murals in Hollister, but she was asked to do major projects in the Bay Area, and has flown a number of times to Temecula.

“There was this guy who I painted for who lived in Eagle Ridge and he moved to Temecula,” she said. “He flew me there twice to paint his new place. And I still fly back to Georgia to do work.”

Harvey is never one to underestimate the sheer power of personal recommendations and word-of-mouth marketing. Ten years ago, she had worked on a mural for a person, who was the neighbor of a woman who was involved with RS Display in Gilroy. In a meandering journey, the friend remembered her friend’s neighbor who had hired Harvey 10 years ago. The woman got Harvey’s contact information and called her to ask if she would be interested in doing some contract work for RS Display.

Over the following two years, Harvey has churned out a number of small projects for RS Display that were shipped to trade shows.

“One project was really interesting,” she said. “It was a large piece of Styrofoam that we had to carve to look like rock formations on Mars for a Sony PlayStation game. RS Display gave us a couple little jobs to see how we would do. Then they said they’d like me to be their artist.”

She said the relationship with RS Display went to new heights last year when the company asked her if she would be available for the entire month of November.

“They didn’t know the whole scope of the job; they just knew it was big,” she said.

She said the company couldn’t give her very many details and she was not allowed to talk about it. But it was significant enough to fly Henson out from Texas, along with several other local friends and artists in Hollister, to help her with the project. She said the company built displays for five Sony PlayStation games that would ultimately be used during a convention Dec. 8-9 in Anaheim.

“What they were creating were the virtual-reality worlds for their games that people could come into and play,” she said, adding that she worked on four of the displays. “One game, called Inpatient, was an old sanatorium and I had to make it look like this old, creepy hospital, complete with all the props. We had to take all these brand new wheelchairs and oxygen tanks and make them look old and rusted.”

She said a Sony representative who came to inspect the displays was amazed by the work.

“They (RS Display) kept telling me ‘You need to be proud of you and your team. You’ve done an amazing job and we’ve gotten nothing but compliments,’” she said. “A couple times a year they get really big jobs like that one, but the problem with Sony is they never know until the very last minute. Once they get the design approved, they have to build it, and then they call me in and I have to get it done fast so it can be shipped to New York or Los Angeles.”

Meanwhile, she has plenty to keep her busy in Hollister. The project at Dr. Banks’ office begins next month; there’s a water tank she has to do; and then several bedrooms.

She recently returned to Georgia and visited the church she and Greg had gone to more than 30 years ago and was amazed to see that a design she had created back then was still there.

“It’s fun to see that people have kept some of my stuff up,” she said. “I’m really glad I was able to get back into the art after taking a break from the bed & breakfast. I really love what I do. It’s funny because you go through these ebbs and flows and you think murals and faux paintings are not so in style, but it’s never gone out of style.”

Below is the official trailer for Sony PlayStation's Inpatient game that Harvey's paintings were based on that people saw at the Anaheim Convention Center. 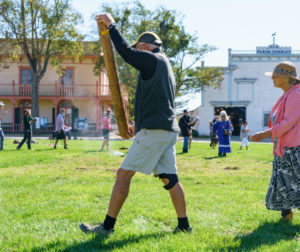 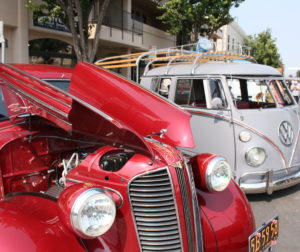 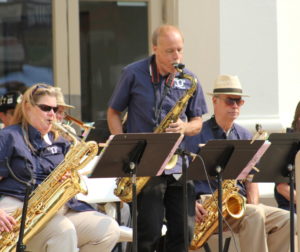