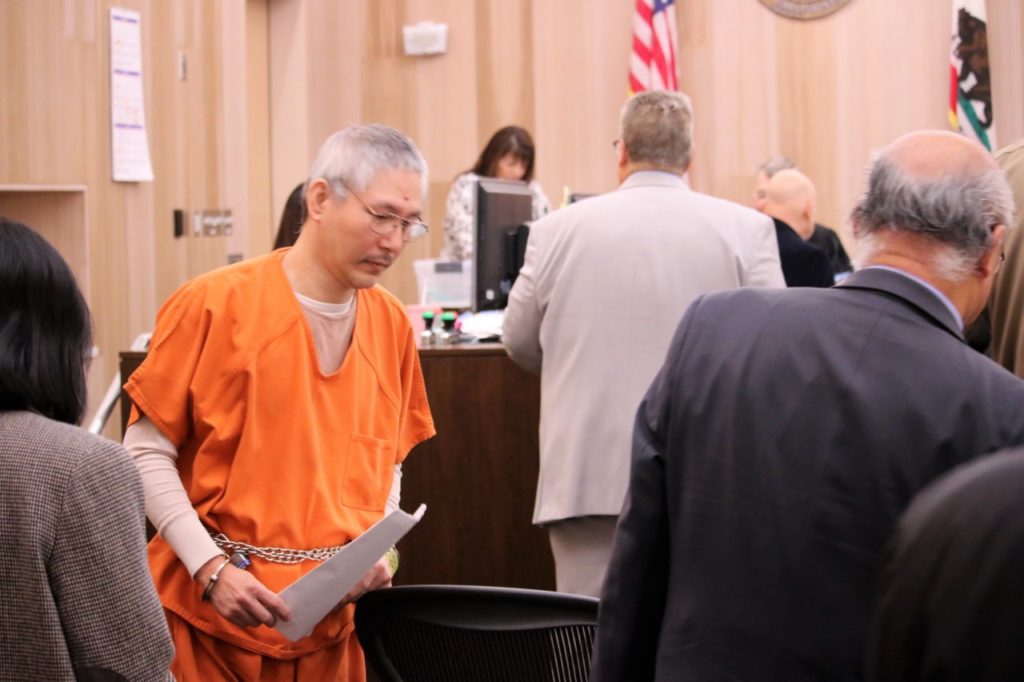 Because the information that the South Korean news team had on the trial came from BenitoLink, they wanted to talk to reporter John Chadwell. Reporter Byeong-Gil Kim tried to interview Korean interpreters outside the courtroom, but they refused to talk to him. Photo by John Chadwell.
×

District Attorney Candice Hooper and defense attorneys Greg LaForge (representing Ji) and Harry Damkar (representing Choi) agreed they were ready to move forward. Judge Steven Sanders set the hearing for March 5-7, at which time the prosecution will present some of its evidence, which most likely would include testimony from the FBI and local investigators, according to LaForge. Then it will be up to Sanders to determine if there is sufficient evidence to go to trial.

After Ji’s daughters filed a missing person report with the police when they suspected something had happened to their mother, a search warrant was issued Dec. 6, 2017. The FBI searched the Ji home, after which Ji and Choi were arrested on suspicion of murder. Later that month, Yoon Ji’s body was discovered buried near San Juan Road above San Juan Bautista.

In March 2018, San Benito County Sheriff Captain Eric Taylor testified in civil court that Ji had said Choi killed his wife with a baseball bat and that Ji said he saw it happen.

Ji and Choi remain in custody as they await trial.

Last week, a television news crew from the Seoul Broadcasting System came to Hollister to gather information for an hour-long documentary to air in South Korea and Los Angeles in March. They interviewed LaForge and Taylor, as well as this reporter.

The TV crew was also at the Feb. 21 hearing to obtain video of Ji and Choi being brought into court.

Producer and on-air newsman Byeong-Gil Kim said through translator Charles Kim that he had not heard anything about the murder case until last summer and was depending on local sources to put his story together.

“We found this story from newspaper articles coming from the United States,” Byeong-Gil Kim said. “We starting researching it the summer of last year and [tried] contacting people in the U.S., with no success.”

Kim said he tracked down Yoon Ji’s family members in South Korea, but they refused to talk to him. He has not been able to locate any of Choi’s relatives for comment.

After leaving the hearing the news team returned to South Korea to continue working on the documentary.