On a visit back home, Kaitlyn Fontaine talks about living in the Polynesian Kingdom of Tonga. 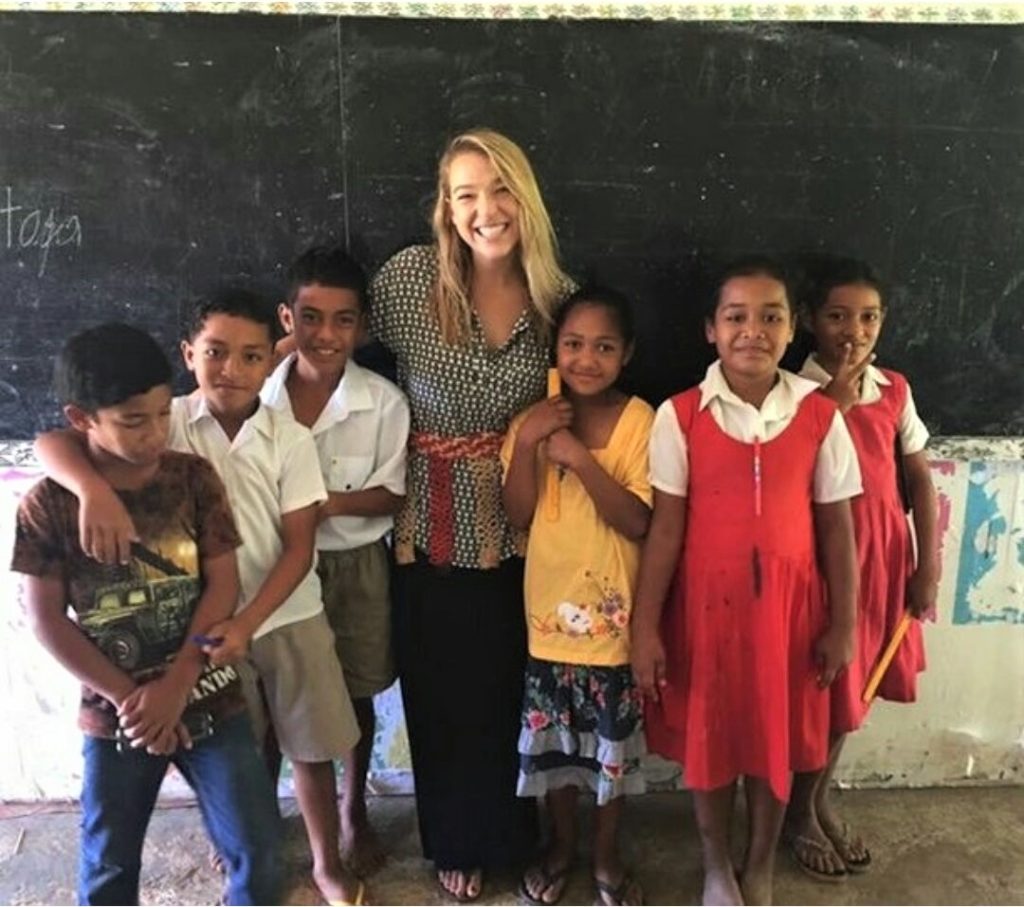 Hoping to gain a deeper understanding of different cultures while making a positive impact on people, Hollister native Kaitlyn Fontaine decided to apply for the Peace Corps while teaching English in China. Fontaine, 24, applied in Dec. 2016 and found out that she had been accepted March 2017.

“My parent’s friend’s daughter was in the Peace Corps and said she felt she was doing something positive,” Fontaine said speaking with BenitoLink while home for a visit for the holidays. “I wanted to create a positive path in life.”

The Peace Corps, created under President John F. Kennedy, offers Americans an opportunity to work and immerse themselves in a foreign country.

At the end of her China stint, Fontaine wanted to work in the South Pacific.

“I really missed the ocean and wanted something small after living in a city with 8 million people,” Fontaine said.

Fontaine got her wish when she was assigned to teach English to children (from kindergarten to sixth grade) while supporting local instructors with teaching strategies in Tonga, a Polynesian kingdom of more than 170 islands. Fontaine arrived in Tonga Sept. 1 and said she quickly felt welcomed by the residents of the island of Nomuka, which is home to about 300 people.

Known for their rich culture and dedication to community, “Tongans are the most giving and friendly people I have met,” Fontaine said.

Locals showed their hospitality by bringing her food—fish, guava, papaya, cassava and sweet potatoes. Fontaine was also frequently invited to their homes for meals.

So far, Fontaine’s favorite moments in Tonga have been the relationships she’s developed with her students. “The lines we have in Western culture between teachers and students aren’t there,” Fontaine said. “All of my free time is with my students.”

She goes fishing and flies kites with her students, and has students helping in her home garden.

“My main thing is teaching, but we’re encouraged to do something secondary,” Fontaine said. “For me it was gardening. The big thing was teaching kids about healthy living and eating.”

She’s also helped start an exercise group for women and has helped to create a community library with reading groups on the island.

Being in the Peace Corps means learning how to live on an income that’s geared to the local economy. Fontaine said Peace Corps members receive a stipend based on the community standard of living. For Fontaine this means a stipend of about $350 a month, in which she spends roughly $10 a week on food.

Living on the island also means living with the same resources as the local people.

As Fontaine stated, “There is no running water. We have power three hours a night.”

Because of its remote location, food is delivered to the island once a week, provided the weather cooperates. The distance and lack of local resources is problematic when people have medical issues.

“A couple of people passed because of medical reasons that wouldn’t happen if we lived on the main island,” Fontaine said. “Death is a very accepted part of life there. I’ve never been to so many funerals.”

Fontaine said she’s had to adapt to stricter gender roles than those found in the United States.

“There are still gender roles there,” she said. “I can’t be as independent as I want. I can’t walk outside alone at night.”

While this may sound intimidating to an outsider, Fontaine insisted that the support of the community and the life she has built make being there worthwhile.

“You are there to help but you get more than you’ll ever give back,” she said. “I’ve never had less, but I’ve never felt more happy.”

Fontaine said her next steps after finishing her assignment in Tonga include applying to law school to study international criminal law. She hopes to work on eradicating human trafficking worldwide.