Officers dispatched to the downtown area on report of a man walking around holding a pistol wrapped in a red bandana. 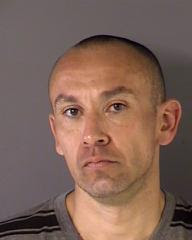 In an Oct. 15 release, Hollister police said they arrested a suspect for a robbery that occurred in the downtown area of Hollister.

Around 9 a.m., officers were dispatched to the downtown area on a report of a man walking around holding a pistol wrapped in a red bandana. Officer Ornelas and Officer Anderson responded to the area and circulated in an attempt to locate the suspect. Police said they contacted a man matching the description given by dispatch on the 300 block of Sixth Street. He was identified as Raul Bedolla, 36, a transient with prior addresses from Santa Clara County and Hollister.

According to the release, during the investigation officers determined Bedolla had allegedly displayed an object made to appear to be a gun and threatened a victim while committing the robbery. Bedolla was charged with felony robbery and he was transported and booked at the San Benito County Jail.

Anyone with information regarding this investigation is asked to contact Officer Melissa Castro at (831) 638-4331. Persons wishing to remain anonymous may call WeTip at (800) 78-CRIME. Information provided to WeTip may qualify for a reward.