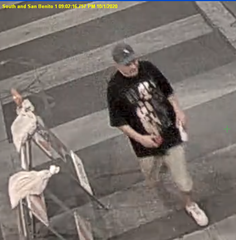 The Hollister Police Department is investigating a series of vandalisms which occurred in various parts of the city of Hollister.

According to a recent press release, during the week of Oct. 1, police received reports of vandalism that occurred at various locations. It consisted of red spray paint which depicted the word, “Worm.”

Video camera footage obtained by HPD showed a Hispanic male adult wearing a black t-shirt with a large graphic on the front, khaki shorts, white shoes, and a grey or black hat with a white logo. In one instance, police said the male was seen on camera vandalizing signage located at the Veterans Memorial Building.

HPD is asking anyone with any information on this  investigation to contact Officer Bryce Morgan at (831)638-4331. Persons wishing to remain anonymous may call WeTip at (800) 78-CRIME. Information provided to WeTip may qualify for a reward.