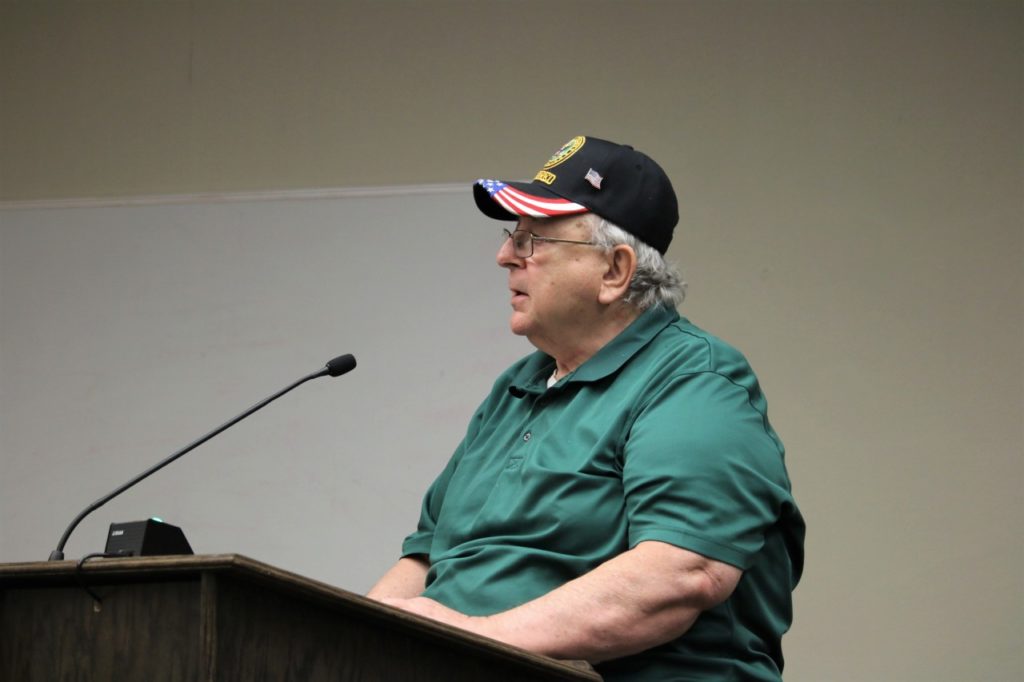 Councilman Marty Richman spoke from the podium and challenged Mayor Ignacio Velazquez and Councilman Rolan Resendiz on claims of city staff and other council members having conflicts of interest and making back door deals. Photo by John Chadwell. For the second consecutive time, a Hollister City Council meeting grew ugly as council members turned against each other.

Central to the acrimony at both the April 22 and May 6 meetings were Mayor Ignacio Velazquez and Councilman Marty Richman, who disagree about the 400 block downtown development. Richman took the mayor and Councilman Rolan Resendiz to task for accusations of conflict of interest and back door deals they had made against other council members and city staff.

Richman challenged Velazquez and Resendiz to take their claims to the city’s human resources office for investigation and possible discipline. He also took issue with Resendiz repeatedly claiming that fellow Councilmembers Honor Spencer and Carol Lenoir “will do anything for somebody who wines and dines them.”

Richman demanded that Velazquez and Resendiz either present their proof or shut up, but no proof was presented. When BenitoLink pressed Velazquez on the matter he could not produce any evidence.

At the May 6 meeting, resident Salvador Mora repeated accusations he had made against the mayor during the Feb. 19 meeting.

Mora said that people were beginning to realize the mayor was using social media to deceive them and alleged that Velazquez had repeatedly called city staff liars.

“Someone else on the council referred to staff as cockroaches,” Mora said.

Later in the meeting, Resendiz corrected Mora, saying that he had called lobbyists “like the one sitting in front videotaping” cockroaches, motioning to Elia Salinas in the front row. Salinas is director of community relations for local medical cannabis company AgriPharma Extraction LLC. Her video of the exchange is here.

Mora said he originally had high hopes for Resendiz, but was disappointed that Resendiz never offered proof for his claims against Spencer and Lenoir. He said that for five years, the mayor preached slow growth, “but has never provided a blueprint for doing so.”

Speaking to Velazquez, Mora said, “You just don’t like anything that goes against your ideas. You are a good used car salesman, that’s what you are.”

Before public comment, a disclaimer is read to explain that elected officials cannot respond during public comment. Despite this rule, the mayor responded.

Velazquez said he didn’t appreciate people insinuating that he was lying. Salinas called out from the audience reminding Velasquez that he was not supposed to respond during public comment. Velazquez argued that he could, and said as someone who ran for office, Mora should show more respect.

“I object. The rules apply to everyone. Point of order,” he said, referring to the disclaimer the mayor had read only moments before.

Then Resendiz said he wanted to make a comment and Richman shouted, “Point of order, the rules apply to everyone.”

Tag-teaming their response, Velazquez said, “When someone comes up here—” Resendiz completed the thought, “and accuses you and calls you out, then you have a right to respond.” Richman said it wasn’t true.

“This is exactly what happens,” Richman said. “The mayor has a set of rules for himself and others for everybody else. Every time he gets up, he accuses the staff and former council of being on the take. When I want to defend myself, I can’t do it, but he can’t keep his mouth shut.

“Mr. Mayor, the rules apply to you like everybody else. Nobody elected you emperor or dictator. Hollister city’s rules give no special powers or voting privileges to the mayoral position.”

City Manager Bill Avera told BenitoLink that in the six years Velazquez has been mayor, he has not responded as he did on May 6. He added that the mayor does not have more voting privileges than other council members.

“I don’t recall that ever happening in the past,” Avera said. “Certainly, sometimes I’ve been given direction to clarify after public comment, but I think what was witnessed went well beyond that.”

Velazquez said any council member could defend themselves against “cheap shots and flat out lies.”

The mayor tried but was unable to silence Richman, who began an extended speech about Velazquez and Resendiz improperly responding to Mora’s comments and accusing staff of collusion.

The proceedings appeared to wear down Spencer, as she left the dais to take a break.

Velazquez and Resendiz also left the dais to sign papers for students watching the meeting, then departed the chambers. Lenoir remained at the opposite end of the dais while Richman continued to speak. When he finally wrapped up his comments, Lenoir thanked him and a portion of the audience applauded.

While Velazquez, Resendiz and Spencer were out of the room, several people turned in speaker cards. Salinas said she wanted to respond to Resendiz’s “cockroach” statement. Another woman said she wanted to comment on the council’s “childish behavior.” But when the three council members returned, the mayor allowed no more public comments and continued on with the next agenda item.

Velazquez and Resendiz are on the same page when it comes to growth and the 400 block, as each has voiced support for a building moratorium to be placed on an upcoming meeting agenda—even as Gov. Gavin Newsom has been pushing for more growth. Meanwhile, Velazquez and Resendiz face a united front of councilmembers Richman, Lenoir and Spencer.

Spencer and Lenoir said they did not appreciate being accused of being influenced by developers.

“I’m tired of this lying and undermining,” Spencer said. “The reason they’re doing this is to discredit me and Marty because they need District 3 and 4 out, so they can put their people in.”

Lenoir said Velazquez now wants a building moratorium, but she believes his motivation is to stop development of the 400 block.

“He lives and dies about the 400 block project,” she said. “Everything he does is geared toward that. He sees it’s coming so he’ll try an end-run with a moratorium.”

Lenoir said Resendiz used “smear methods” during his campaign in 2018, and that he will be ineffective going up against the solidarity she has with Spencer and Richman.

“We’re not going to tolerate that,” she said. “You don’t smear me in my hometown where I worked so hard to be honest. Just bring the proof that we were ‘wined and dined’ and the proof that staff and consultants colluded, or shut up.”

The confrontations at the last two council meetings reveal the bitterness of local politics over the last 20 years as Hollister attempts to put the 400 block back into commercial use for tax revenue as part of its downtown revitalization. As soon as the Community Foundation for San Benito County and the Del Curto Brothers development projects came to the 400 block, Velazquez took an adversarial stance.

Velazquez has since attempted to interject his vision of “smart growth” without explaining what it means.

According to Avera, city employees have expressed discomfort with the mayor’s social media outbursts, which they feel are being used to protect his personal investment, not stop growth.

Velazquez has repeatedly claimed that years ago there was an agenda item to approve a park and he told BenitoLink that Avera said it was taken off the agenda for some “minor tweaking,” but that it was never brought back for a vote. He said when he pressed Avera for an explanation, Avera told him it was planned for development and Velazquez didn’t have a say in the matter.

Avera explained that the Redevelopment Agency spent nearly $1.5 million to purchase the property and to remove the collapsed buildings after the 1989 Loma Prieta earthquake. He said it would make no fiscal sense to build a park or plaza there, as the objective was to build a “catalyst project” to reinvigorate downtown.

“For 25 years, since I came to the city, that’s what the goal was,” Avera said. “There’s been nothing but buildings to generate tax revenue that would benefit Hollister.”

For the last few years, the mayor has attempted to stop any plans to develop the 400 block next to his building, the Vault. His first effort was through a referendum in 2017, which was unsuccessful, and now an appeal scheduled for May 20.

At a recent Hollister Planning Commission meeting, Velazquez said city program manager Mary Paxton was “playing games” and stating her own opinion on the 400 block. He later admitted to BenitoLink that he had no proof of his accusation against Paxton or any other city employee.

Velazquez once had other plans for the 400 block, even taking out a $20,000 loan from the city in 2000 to conduct a feasibility study and determine if the public would support an arts center. The study confirmed support at the time was not there. Over the years, there have been other proposed projects, including a hotel, a theater and other businesses.

Machado told BenitoLink he has never been in favor of a plaza and called Velazquez a “charismatic liar.”

Avera, who plans to retire from the city later this year, said he doesn’t understand Velazquez’s motivation about the 400 block, but thinks it might be that the Community Foundation’s building will be used not only for nonprofits to meet, but community events, which Velasquez may view as being in direct competition with his Vault property.