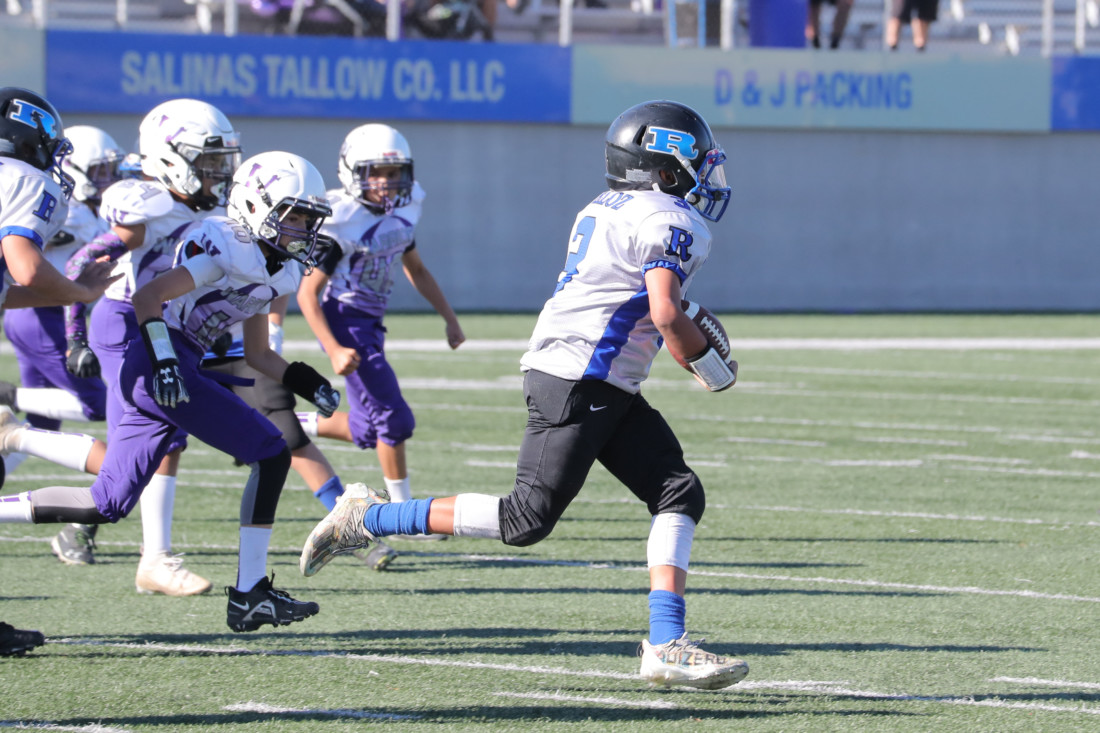 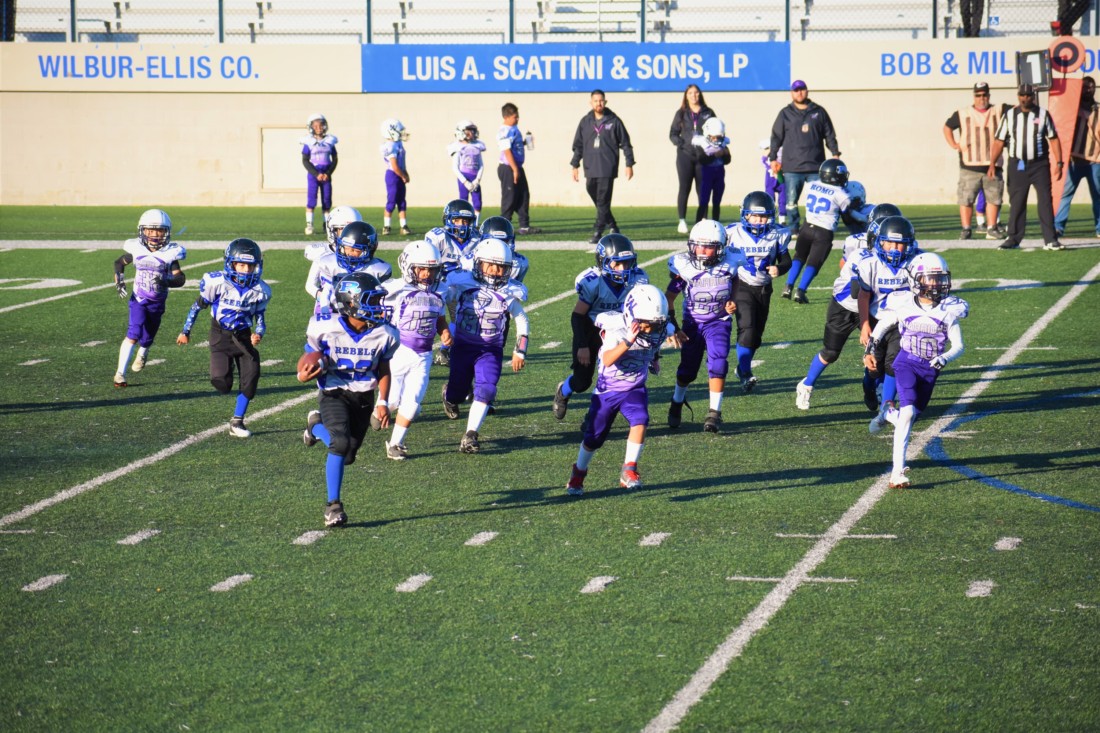 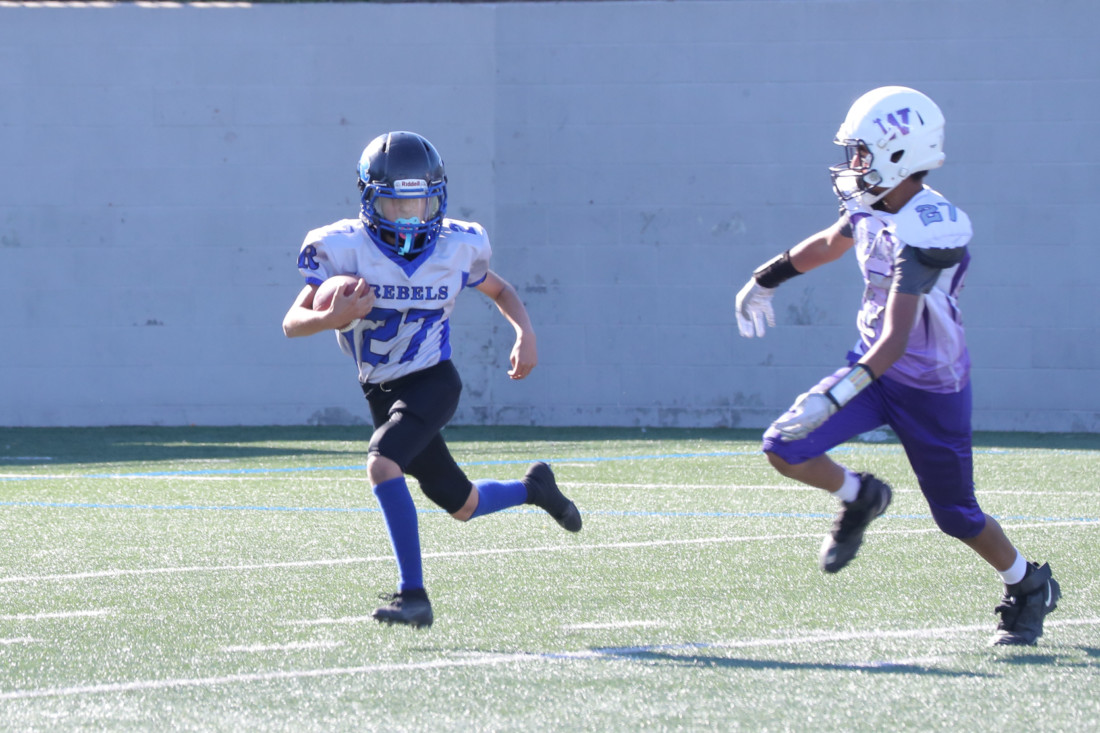 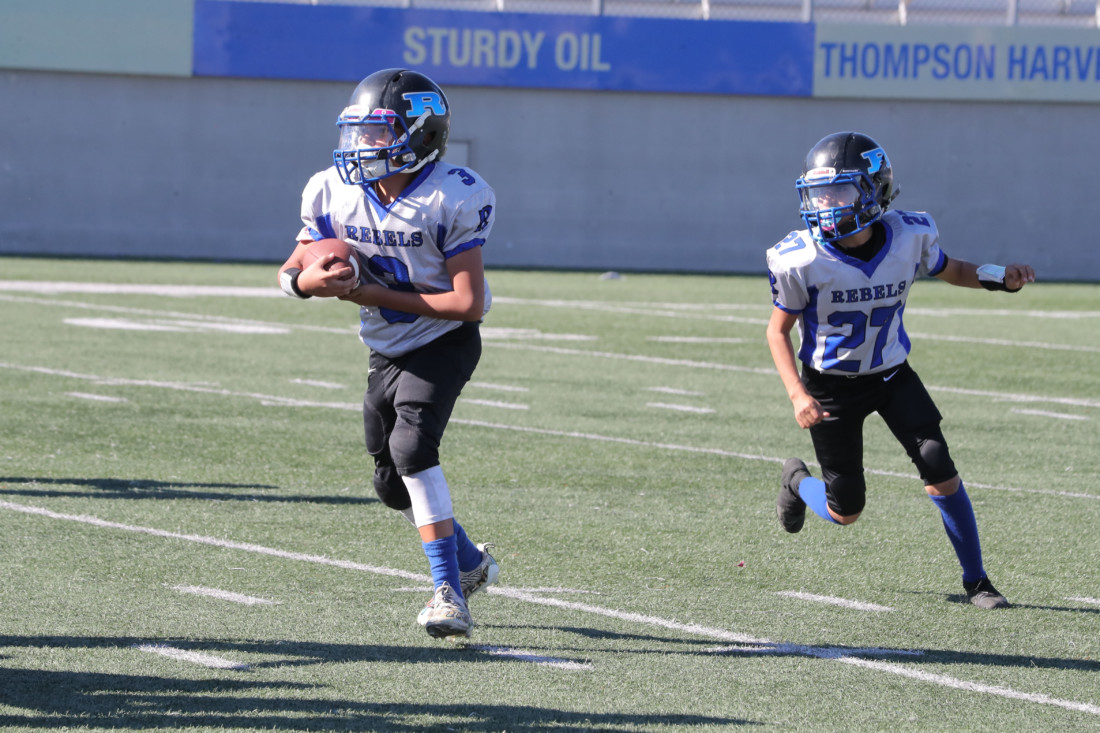 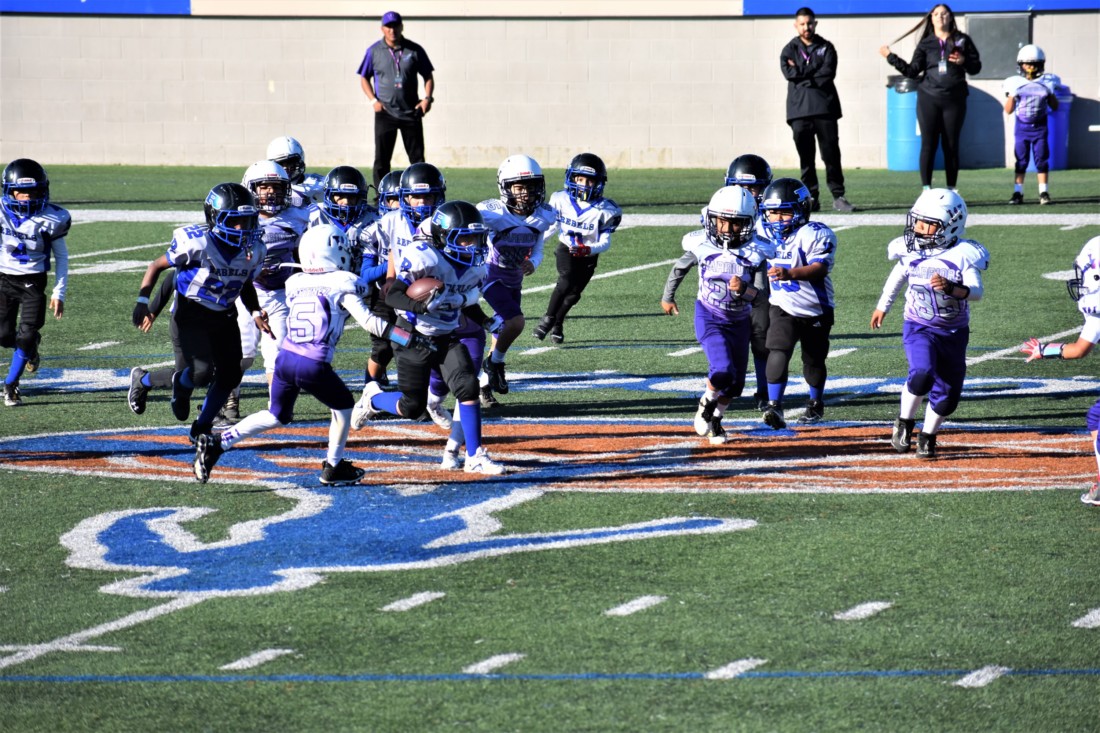 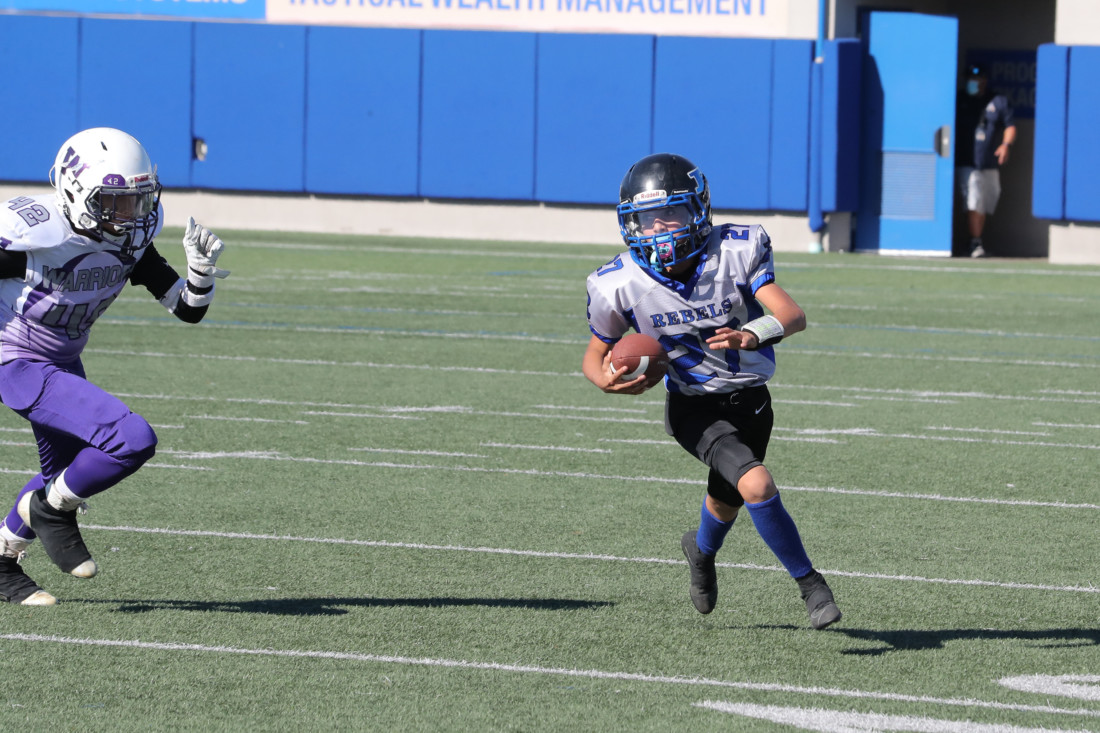 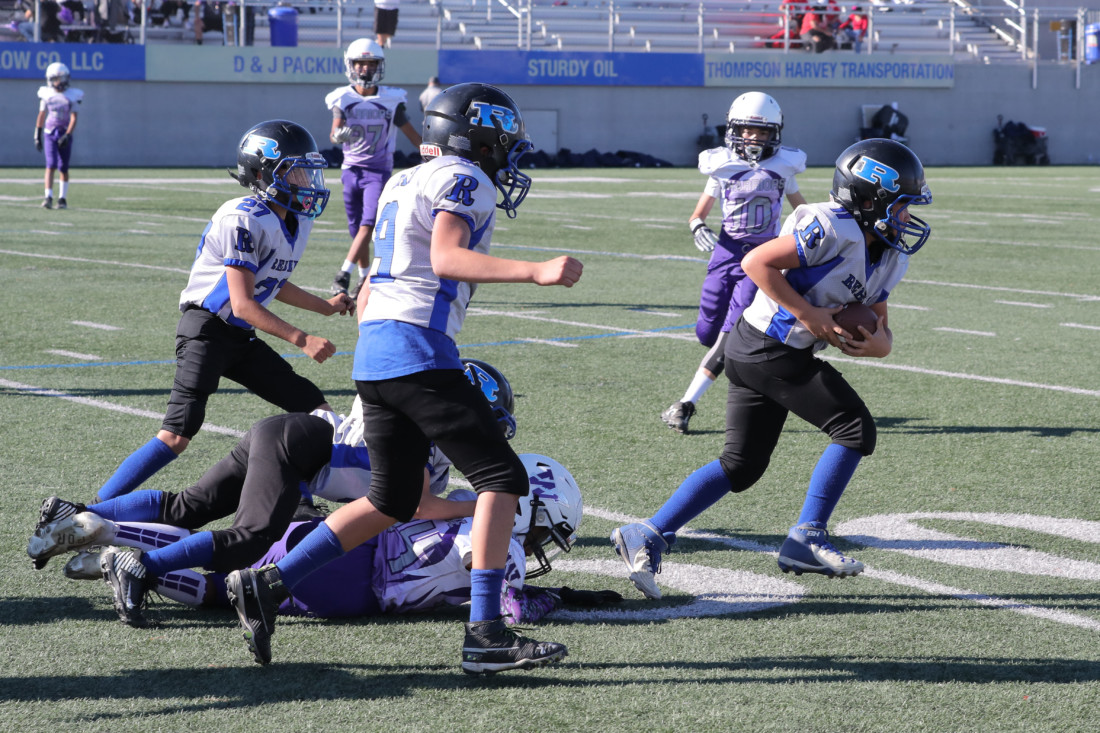 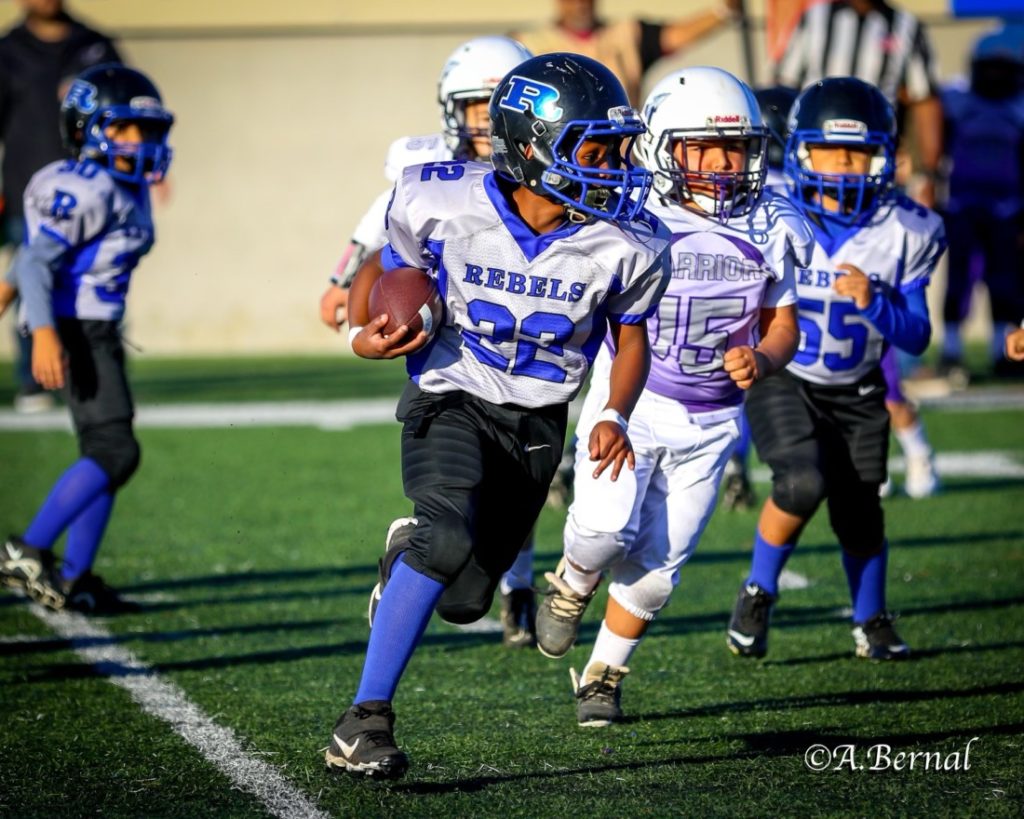 Junior PeeWees against Soledad. Photo by courtesy of Hollister Rebels. 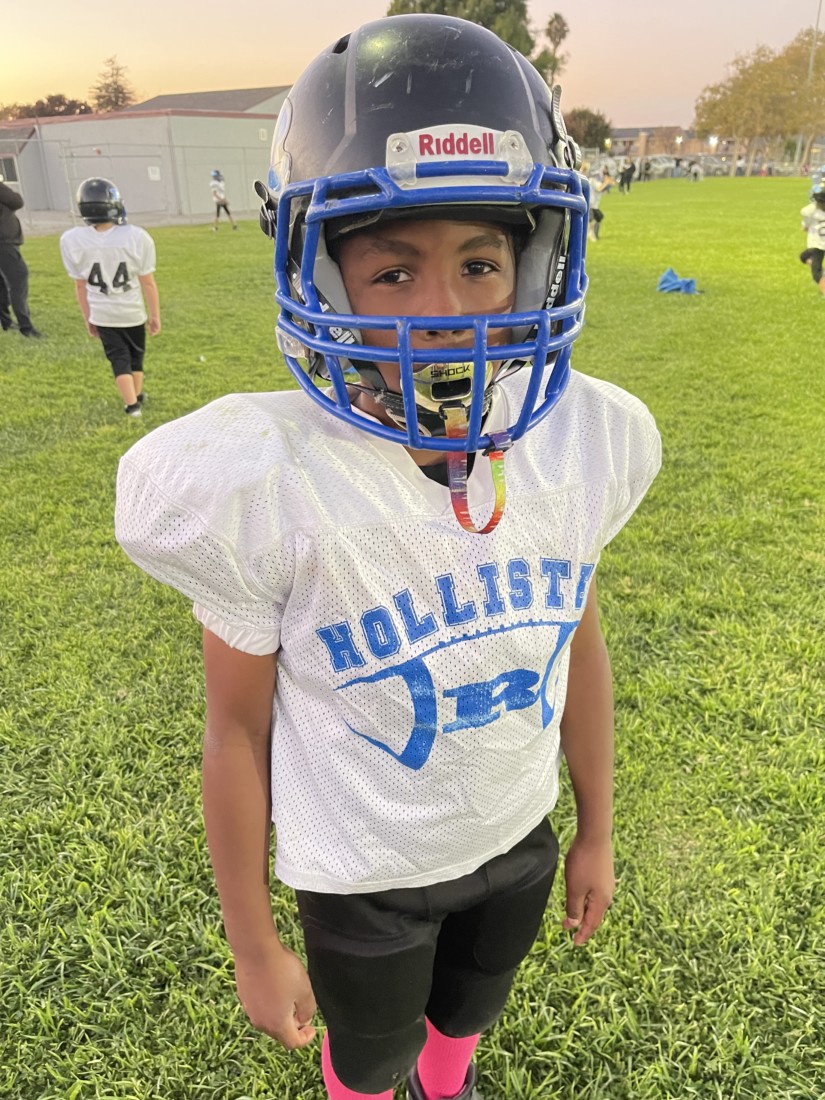 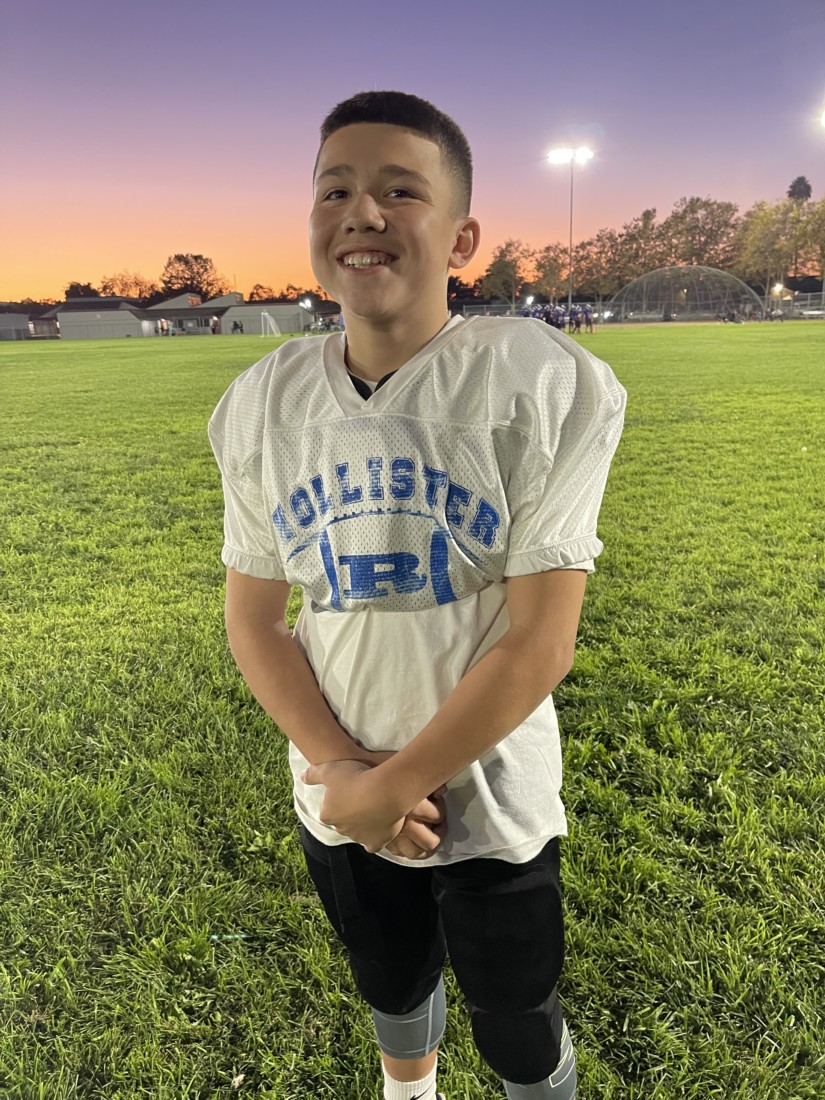 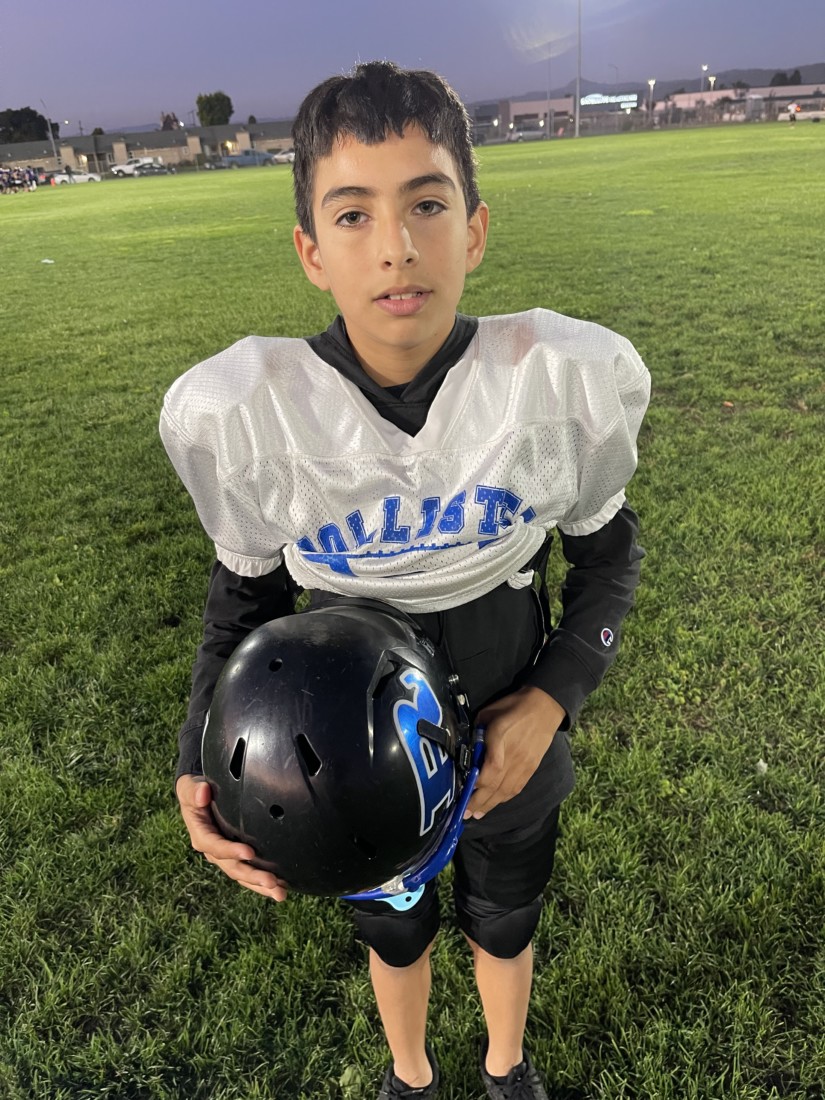 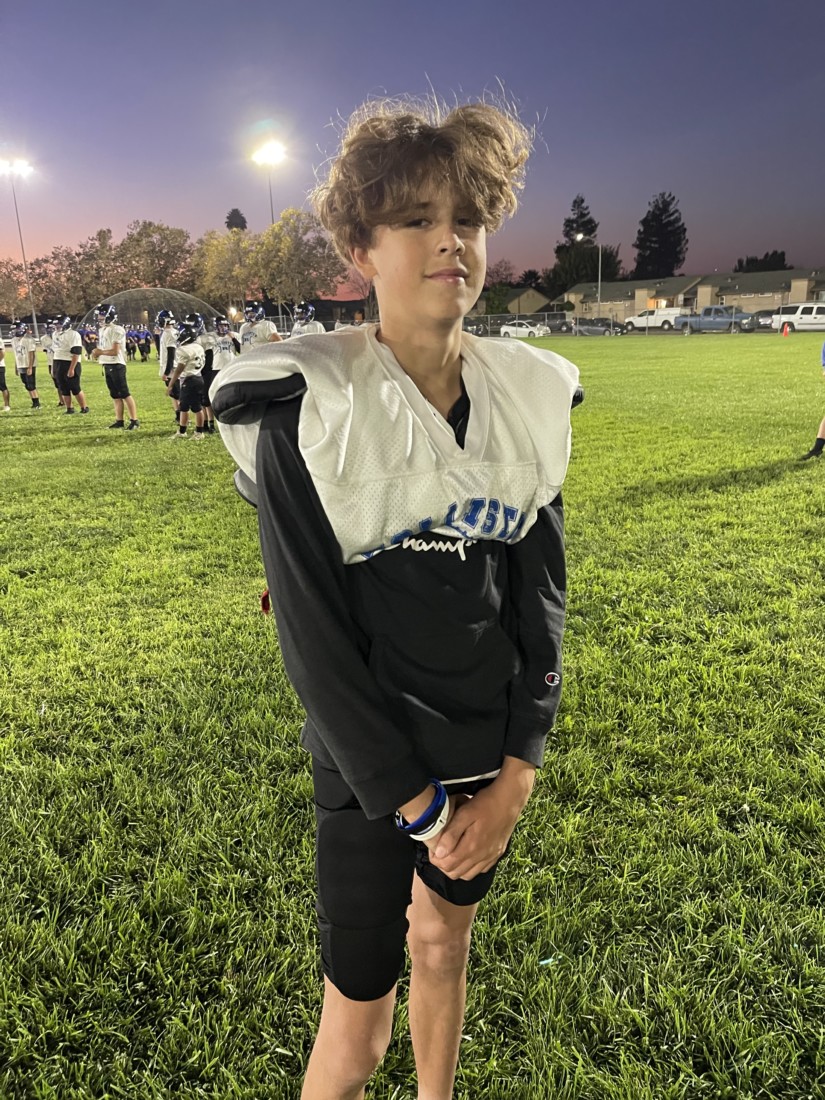 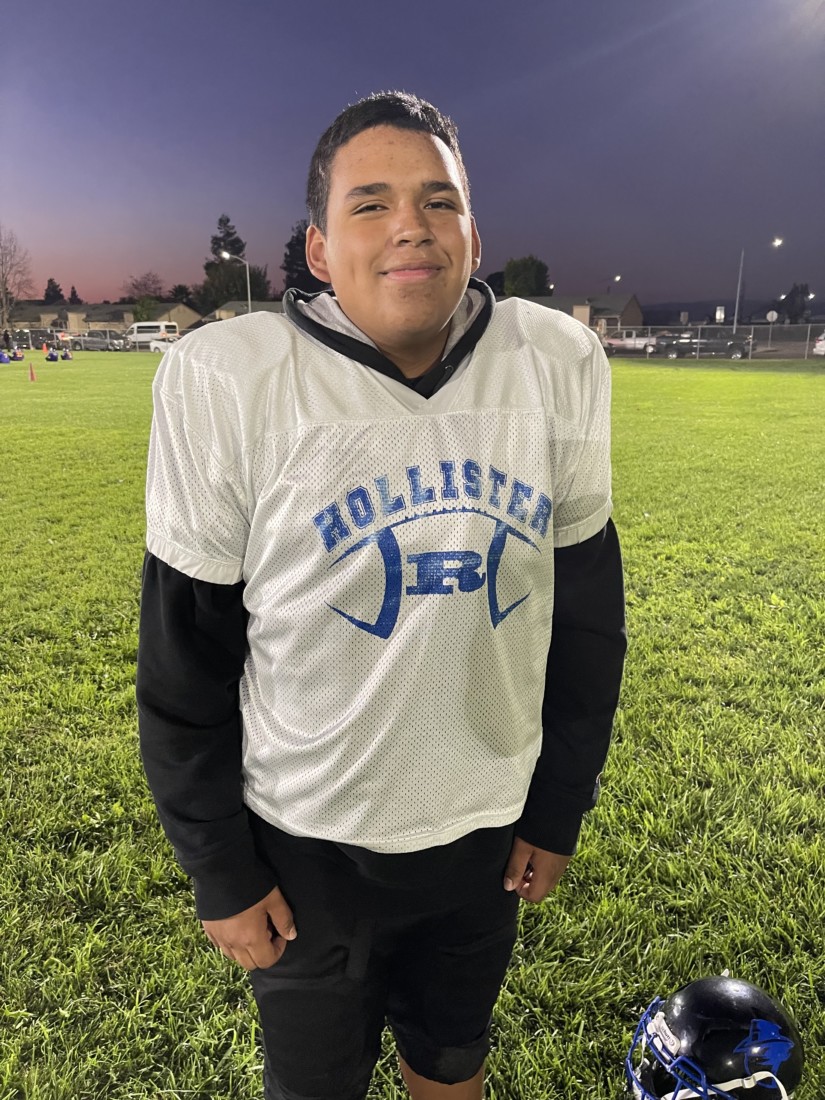 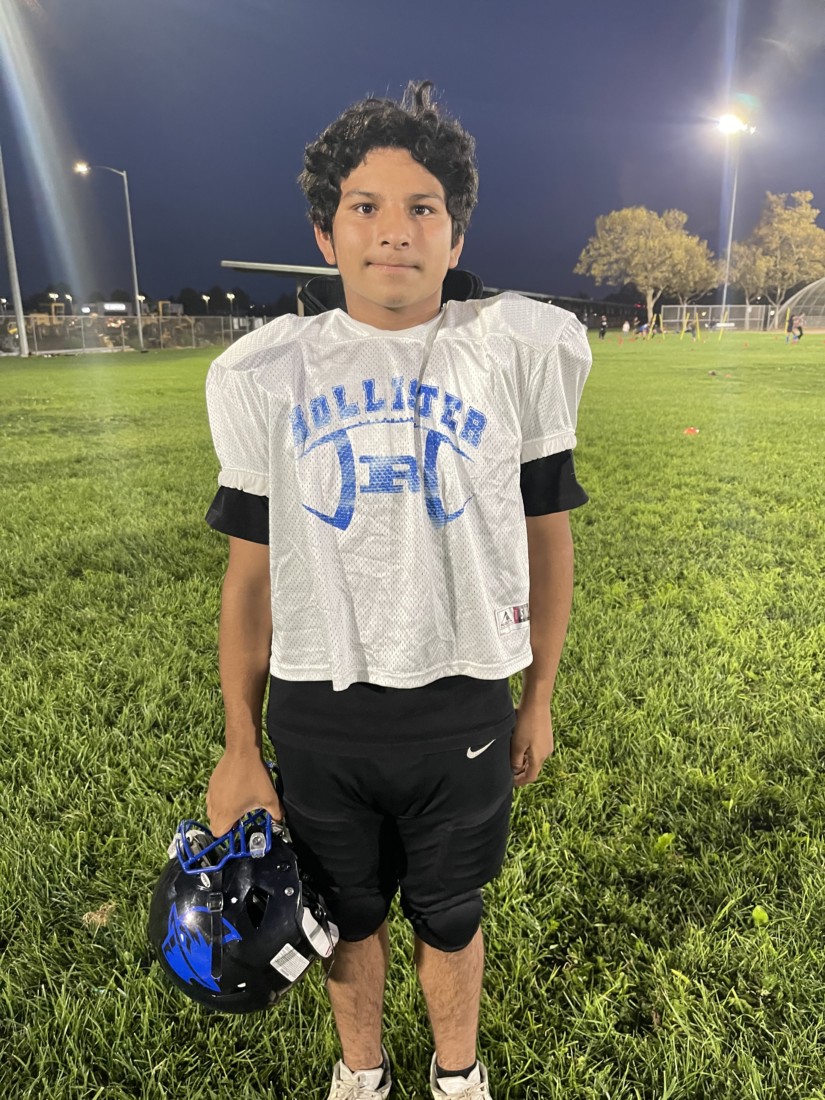 Two of three Hollister Rebels youth football teams advanced in the second round of playoffs held in Salinas on Nov. 13. All played against their Salinas Warriors counterparts.

The Junior PeeWees and Midgets came out victorious with 12-7 and 14-0 wins, respectively. The PeeWees lost with a score of 26-19.

The Junior PeeWees, ages 6-9, played first and were clear favorites in the contest, having gone into the game with a 6-4 record and having already beaten the Warriors 39-0 in their sixth game of the season.

“Both teams were very evenly matched this time,” said Coach Frank Casillas. “From the kickoff, it was a hard-hitting game for this age group. Neither team at the beginning got the edge until the end of the first quarter when our quarterback Julian Valle broke and made a touchdown run. That got the kids excited and motivated.”

Both teams scored in the second quarter, taking the score to 12-7 at halftime. The Rebel touchdown came by way of Major Dixon, who has proven to be a star player for the team this season.

“Major is a really smart kid and that translates on the football field,” said Casillas. “He has a high football IQ, which is not something you can teach, and he just plain loves the game. He would practice all night if he could.”

The intensity grew after play resumed.

“The third quarter got tougher, Casillas said. “Both teams made their adjustments and it became a real battle.”

The end of the third quarter saw Dixon take the ball for a 60-yard touchdown run, and a successful conversion left the Rebels in the lead 19-7, and, with a quarter left to play, that remained the final score.

“It was kind of a hard game,” said Dixon. “It was kind of hard to make the touchdowns because they kept blocking me. So we just played harder. I did good but it’s all about teamwork and focusing on playing football.”

The PeeWees, ages 10-12, took the field next. They faced stiffer odds than the Juniors, coming into the game with a 5-5 record and a previous 28-12 loss to the Warriors. They also had a lower player turnout this season, limiting their options on the field.

“It has been very challenging,” said Coach Damien Gonzalez. “We only have 17 players and mainly the same 11 kids are playing defense and offense. They are basically on the field the whole game.”

The first half of the game saw the Warriors fall flat but the Rebels revived in the second half with strong team play. Raymond Veloz ran nearly the whole field twice for touchdowns and Jordan Camacho scored as well. But it was not enough as they went down to a 26-19 loss.

“The other team just has a lot of kids,” Gonzalez said. “They adjusted to our plays and they have a lot of older kids who are just there, already playing the game at a higher level. The Warriors are a good group of kids—I’m not going to take anything away from them—but our kids get tired fast. It was a hot day today, they are playing the entire time, and there’s no way around that. These are kids, not NFL players. It’s tough out there and I am really proud of all my boys, the way they fought to the end.”

The final game of the day was the Midgets, ages 13-14. They hit the field with a 5-4 record that included a 14-6 win against Soledad earlier in the season. This game was a modest blowout at 14-0.

“It was a tough and strategic battle,” said Head Coach Lionel Espinoza. “The kids kept fighting and they pulled it out. That’s impressive—17 of the 25 kids on our team had never played football before. We started strong with a first-quarter touchdown by Cruz Raquet and then a fourth-quarter touchdown by Issak Hernandez sealed the game. We went to our basics and just ground it out. The other team did their homework but so did we. And our boys wanted it more.”

On Nov. 20, both teams will return to Rabobank Stadium to compete for the championships.  The Junior PeeWees will play the Alvarez Titans at noon and the Midgets will play the Steinbeck Tigers at 5 p.m.

Jovani Davalos, who plays for the Midgets, said his team is ready.

“We have not played Steinbeck before, but they are a good team,” he said. “It is going to be tough but our team is going to play at 100%. I’m going to give it all my effort and we are going to win.” 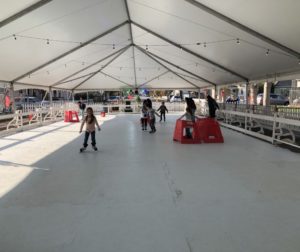 Hollister holds Christmas in the Park 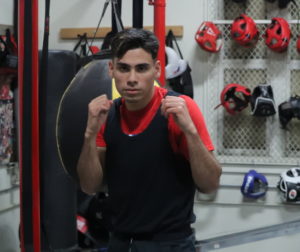 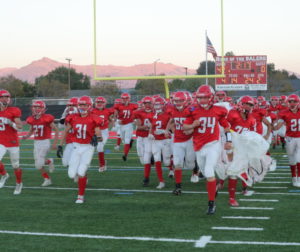 The Balers show heart and skill with an overall 6-4 record.