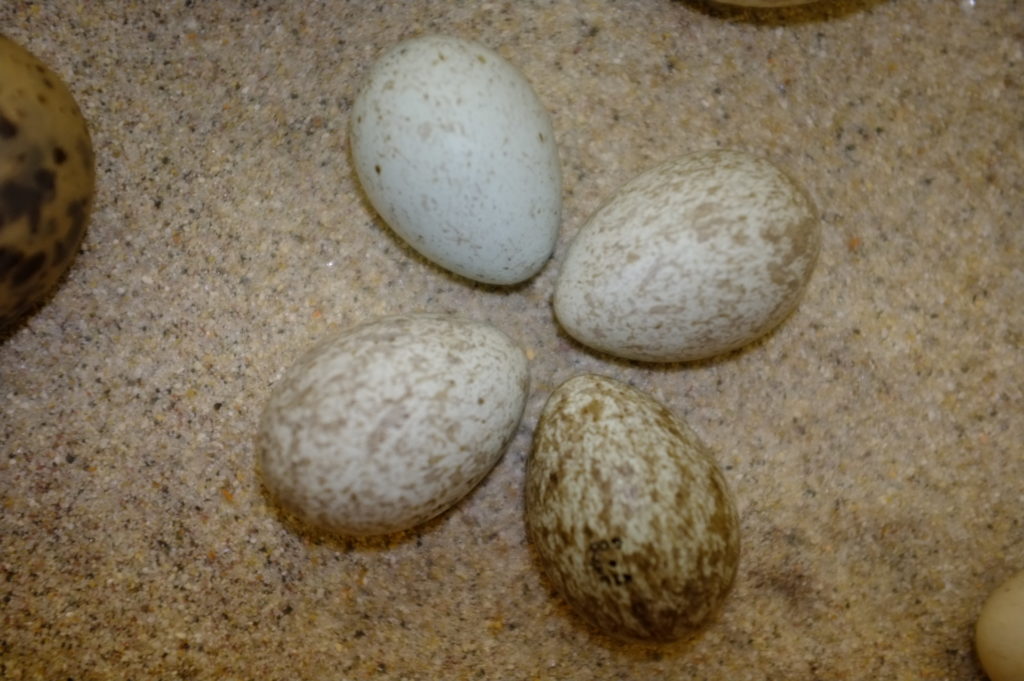 A clutch of Common Raven eggs that were taken from a nest in southern San Benito County in the 1920s by the late Jack O'Donnell. Photo courtesy of Mark Paxton. On March 30, 1931, the late Jack O’Donnell of Hollister hoisted his good friend, Francis Faria, over a cliff’s edge near Coyote Peak, a hilltop located off Lone Tree Road. The then 20-somethings had ventured a few miles northeast of the city in a Model-T Ford, lured by their new hobby, oology or egg collecting. As the smaller statured Faria placed his feet on the ground, he presented O’Donnell with four Prairie Falcon eggs—a clutch that became part of the latter’s burgeoning oological collection.

Eighty-five years to the day, Hollister resident, Mark Paxton, shared this story about his “Uncle Jack” with about a dozen people who attended the San Benito Historical Society’s meeting held at Dunne Memorial Park Clubhouse on Wednesday evening, March 30.

A self-described “big bird guy,” Paxton began with question, “Why do birds lay eggs?” An audience member raised her hand and said, “To pass on their DNA.” Paxton nodded in agreement and then added that external incubation occurs because “birds can fly.”

In fact, a bird’s entire anatomy is designed to defy gravity, Paxton explained. For example, a female bird is born with a single ovary, and after mating its reproductive organs, as well as those of its partner, return back to the cloacal, an internal chamber that houses a bird’s genitalia.

Physiological changes in birds also reflect their ability to fly.

In the fall, the Yellow-rump Warbler is often spotted in Hollister’s city parks, foraging on fruits and nuts. In order to eat such fare, the bird’s digestive tract elongates, Paxton said. As the warbler migrates north for the winter, it begins feasting on insects. The change in diet compacts its gastrointestinal system.

Sitting on tables behind Paxton were dozens of eggs, neatly arranged in three drawers topped with glass. The eggs are from a vast collection that O’Donnell passed on to his nephew some years ago.

Measuring about an inch-and-a-half, a Killdeer egg is off-white in color and covered with blackish-brown blotches. This provides the perfect camouflage for the ground nester that’s found throughout San Benito County, Paxton explained in an interview with BenitoLink prior to his presentation.

Before his audience, Paxton — a member of the BenitoLink advisory board — added that Killdeer “hatch precocial” (feathered and mobile), while birds of prey, like the Prairie Falcon, hatch without feathers and are essentially helpless.

The shape of a bird’s egg is also revelatory.

Resting on rock ledges, seabird eggs are often pointed, Paxton said. If the egg is accidentally bumped by a parent or exposed to a gust of wind, the egg will spin rather than fall into the sea, its configuration generating a force that keeps it within the nest.

Despite nature’s design, seabirds eggs were unable to stave off the hobby that swept through the United States beginning in the 19th Century and that continued unabated through the first quarter of the 20th Century.

Dubbed by Paxton as a “pseudoscience,” oology produced hobbyists who scaled cliffs, climbed trees, and waded through marches, searching for that common or rare find to complete their collection.

Oology became O’Donnell’s favorite pastime, especially in the 1920s and ‘30s. “It was a chance to get with the guys and to stalk something,” Paxton said of his uncle’s forays into San Benito, Santa Clara, and Merced counties.

Oologists were required to register with the The American Ornithologist’s Union (AOU), an organization established in 1883 “to advance the scientific understanding of birds, to enrich ornithology as a profession, and to promote a rigorous scientific basis for the conservation of birds,” according to its website.

As he collected eggs, O’Donnell placed them in a specially crafted, wooden-box fitted with slots full of cotton. Upon returning home, he assiduously drilled a small hole in each egg, emptying its contents and numbering the shell. In meticulous cursive script, he recorded the AOU number—the bird’s taxonomical designation—and chronicled his adventures, including the one with Faria, on cards titled, “Oological Collection of Jack O’Donnell.”

“Placed on a ledge of a 150-foot cliff about 75 feet up. The eggs were placed on the bare rock,” O’Donnell wrote about the nest that Faria had taken the clutch of four Prairie Falcon eggs from.

The Migratory Bird Treaty Act (MBTA) of 1918 effectively outlawed oology, though exceptions were sometimes made, Paxton explained. However, today the only ones collecting eggs are generally university researchers who must first prove to the United  States Fish and Wildlife Service that the scientific value of their work outweighs the environmental impact on the bird whose eggs they covet.

Coincidentally, the year 1918 also ushered in the era of modern birding.

As World War I came to an end and the guns along the Western Front fell silent, the optical technologies that were used to survey the pockmark battlefields became available for civilian use.

Binoculars provided ornithologists a bird’s-eye view of their subjects without resorting to birdshot. Paxton explained that before John James Audubon painted the iconic images in his book, “Birds of America,” he shot and killed every one.

By the late 1930s, O’Donnell embarked on a career as an orchardist, finding little time for oology. (Paxton stated that his uncle’s last recorded collection was dated 1943.)

The new calling provided a fresh perspective for the Hollister oologist.

Between rows of apricot trees, O’Donnell surveyed the branches identifying the birds that visited his property, often accompanied by his nephew, Paxton. Collecting eggs was no longer the priority.

“He liked watching birds and what they do,” Paxton said of O’Donnell.

That passion was instilled in the young Paxton.

In the interview with BenitoLink, Paxton stated that birds “present themselves very generously to us.” And in San Benito County this can occur in one’s backyard or sometimes in the the most unlikeliest of places.

San Benito Historical Society Board of Director member, Anita Kane, who attended Paxton’s presentation, said that Cooper's Hawks perch on trees in her Hollister neighborhood, scouring the street for prey.

At times, Kane’s backyard becomes a “hunting ground,” as the medium-sized hawks swoop down, raiding nests or snatching unsuspecting victims wading in the bird bath. Admittedly it’s “hard to see,” she added.

Hollister’s Waste Treatment Plant is the “hottest spot” in the area to view Wilson’s Phalarope, said Paxton. The sewage ponds serve as a way station as the bird migrates towards South America for the winter. Like a top, the bird spins and spins on the water, stirring up plankton to feast on.

Though he enjoys all birds. Paxton is partial to the Common Raven. “They employ subterfuge. They make tools. They play. And they’re really smart,” he said of the carrion-eater in the interview with BenitoLink.

He added that he hoped to open the eyes of those attending his presentation “a little wider to appreciate what’s in San Benito County more deeply.”

There’s little doubt that Paxton left his audience with a greater appreciation of the winged creatures that fill our county’s skies.

Attendee, Verona Flint of Hollister, thanked Paxton after his presentation. And in an email to BenitoLink she wrote, “I hadn’t given much thought to the different shapes of the eggs, given the fact that they are not all incubated in the same surroundings.”

Jack O’Donnell remained committed to persevering the uniqueness of San Benito County until his death in 2010.

His memoirs and the family history he wrote are archived at the San Benito County Historical Society Museum. Later in life, O’Donnell played an instrumental role in establishing the county’s historical park.

And fortunately for us all, O’Donnell left his extensive oological collection with Paxton, who beams with pride when talking about his late uncle and who soars when sharing his knowledge of birds.