Teachers demonstrated on street corners in Hollister to let the community know that they have not been able to come to an agreement with the Hollister School District over pay. 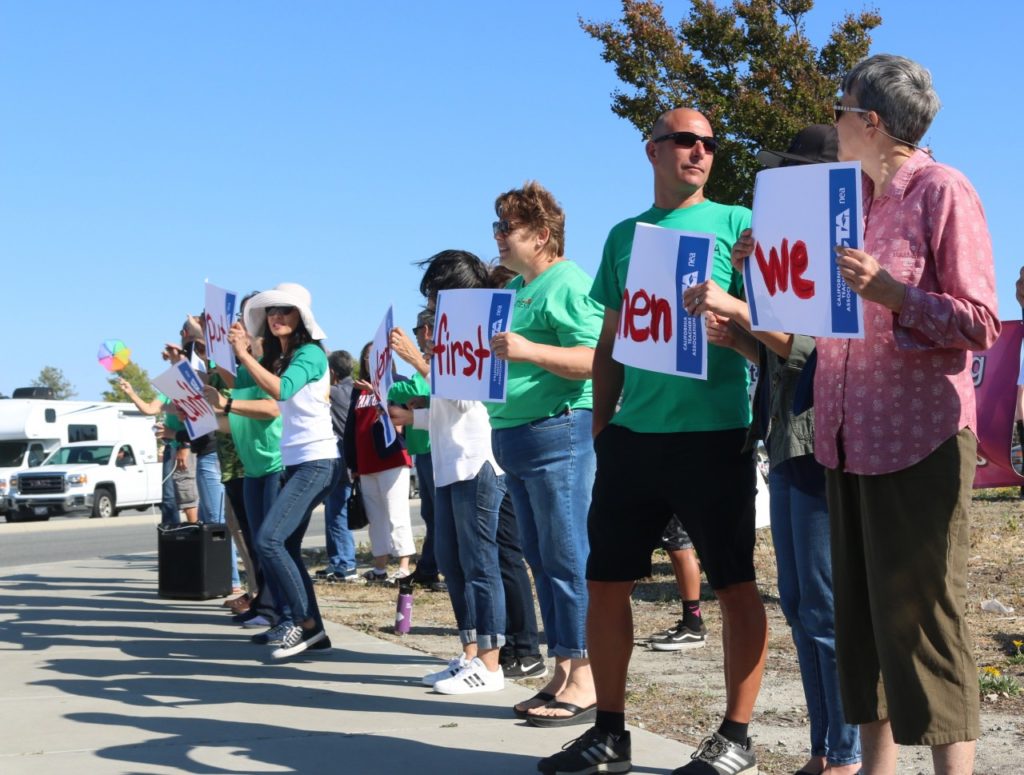 Local teachers took to the streets to show their unity over pay negotiations. Photos by John Chadwell. Teachers from schools within the Hollister School District demonstrated on street corners May 17 to inform the community they are frustrated with negotiations for a pay raise.

“We’re fighting for a raise not just for ourselves, but for our students’ futures and the future of our community,” Hagins said.

While teachers in West Virginia and Oklahoma have walked out of their classrooms in recent months, Hagins wanted the community to understand local teachers are not striking.

“This is our attempt to alert the community,” Hagins said. “It’s time to stand up for our students.”

Marguerite Maze Middle School teacher and lead HESTA negotiator Jan Grist said teachers are asking for a 1 percent raise from July 2017, and 2 percent from January 2018. Hagins said teachers have negotiated for wage increases each year for over five years.

“We want them to be able to read, write, and be productive citizens,” Hagins said. “We can’t do that when we have 34 students in a first grade classroom.”

She said while the media reports on teacher shortages in California, they are paid less than administrators. The average starting salary for a teacher in California is $44,782, according to the National Education Association. General fund spending by school districts in California on teacher salaries increased by 15 percent, from the 2010-11 school year to 2015-16. During the same period, administrator pay grew by 27 percent, according to a Sacramento Bee story that cites data from the California Department of Education. The story further pointed out that when adjusted for inflation, California teacher pay decreased while administrator pay increased.

According to HESTA, the Hollister School District has experienced a 35.51 percent increase in revenues since 2012-13, while teacher salaries, as a portion of expenditures, have decreased from 43.4 percent to 40.8 percent during the 2015-16 school year. Hagins said there are few new teachers coming to Hollister, but there is no shortage of administrators. She also said there is a $10 to $12 million surplus and that there is more than enough money to increase teachers’ pay.

“I was surprised at how much the special education department grew,” she said. “None of these people work with students, but the department has one director, two coordinators, one principal, one behavioral specialist, and two program specialists. Every school has its own principal, so I’m not sure why there has to be extra principals at the district office. Each of these people make $100,000 or more. This is money that could go to teachers to lower our class sizes.”

Grist added, “They’re [administrators] not at the sites. You need to be with the children. If Hollister truly is a school district where students are first, that’s where the people should be.”

Hollister School District Superintendent Dr. Lisa Andrew, along with Assistant Supervisor of Human Resources and lead negotiator Erika Sanchez spoke to BenitoLink on May 22. Andrew said School Services of California (SSCAL) advised HSD to maintain 21 percent reserves to stay fiscally solvent. With a budget of $58 million, the minimum of $12.8 million should be in reserves, but, according to Andrew, the district only has 13 percent or $7.5 million.

Andrew said the main sticking point in negotiations is that teachers want to lower the reserve. She said teachers feel the reserve is too high and the district should give them more money. Sanchez said she tried to explain what SSCAL recommended and that HSD increased its proposal by 1.07 percent if the teachers agreed to work two additional days.

“We have not reached an agreement,” Sanchez said. “We have provided the teachers’ union with a compensation package equivalent to what we offered our other employees who already accepted it, and will be reaping those salary increases by the end of this month.”

Andrew added Hollister School District removed a cap on its 90 percent contribution to healthcare benefits. She said rising retirement costs for classified employees will be as much as 25 percent. She said the teacher retention rate is high because the pay and benefits are competitive with other districts and, according to SCCAL, HSD has the highest paid TK thru 8th grade teachers in the county.

“They feel the money is there and they should have it,” Andrew said. “Our average teacher makes $73,000 per year for 186 days of work. I think there are many people in Hollister that would love to have that kind of compensation.”