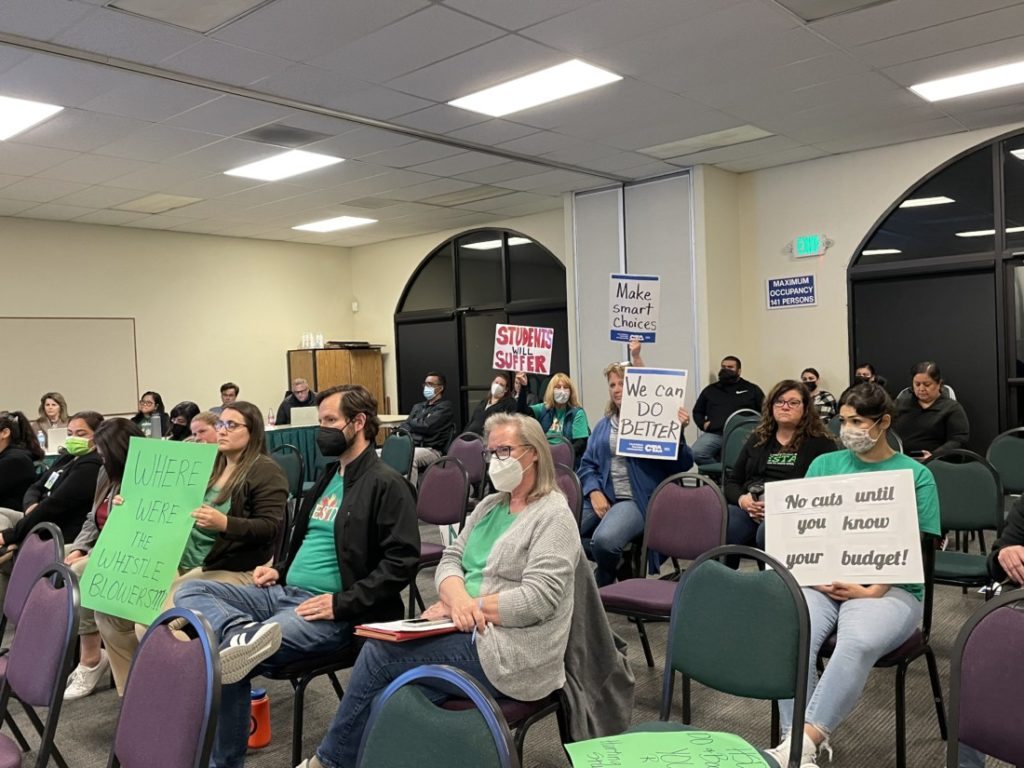 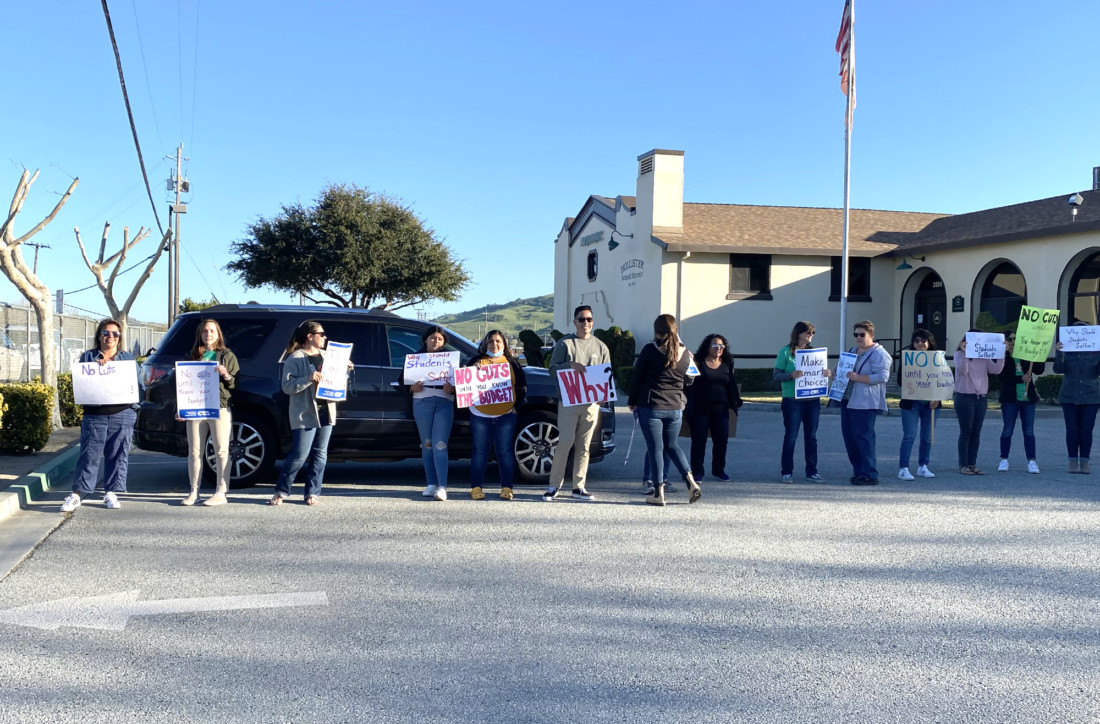 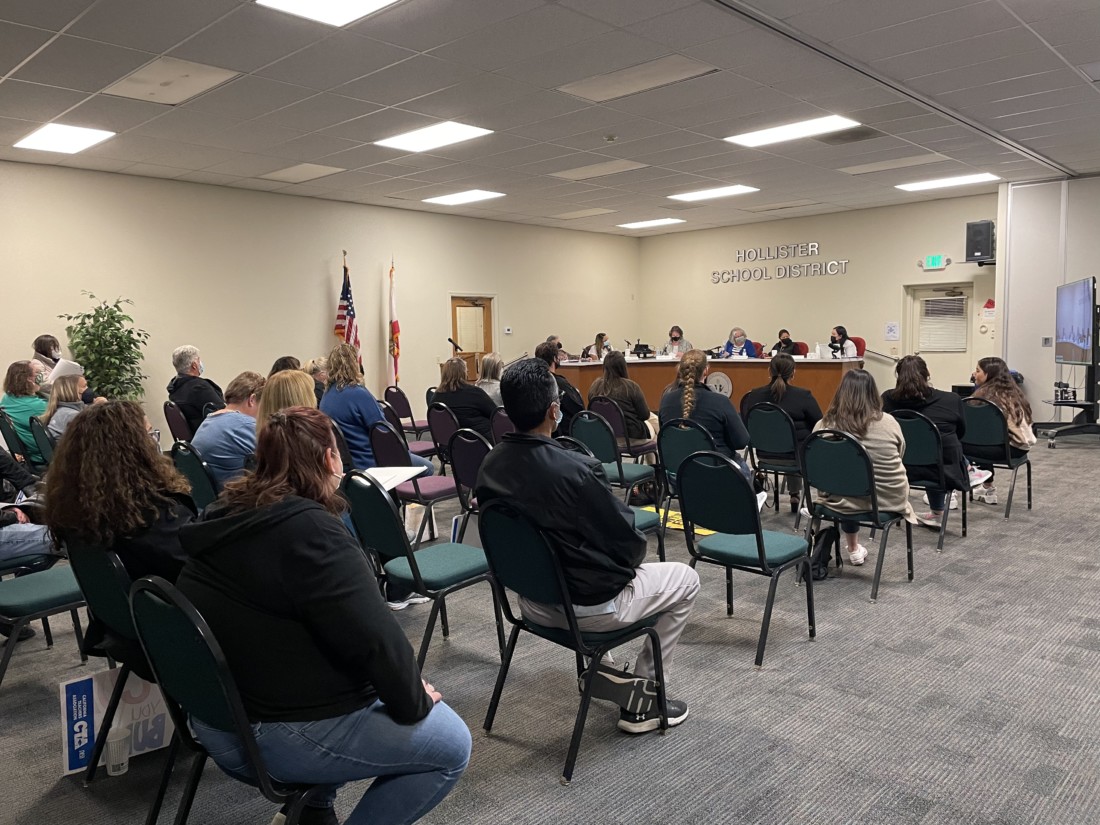 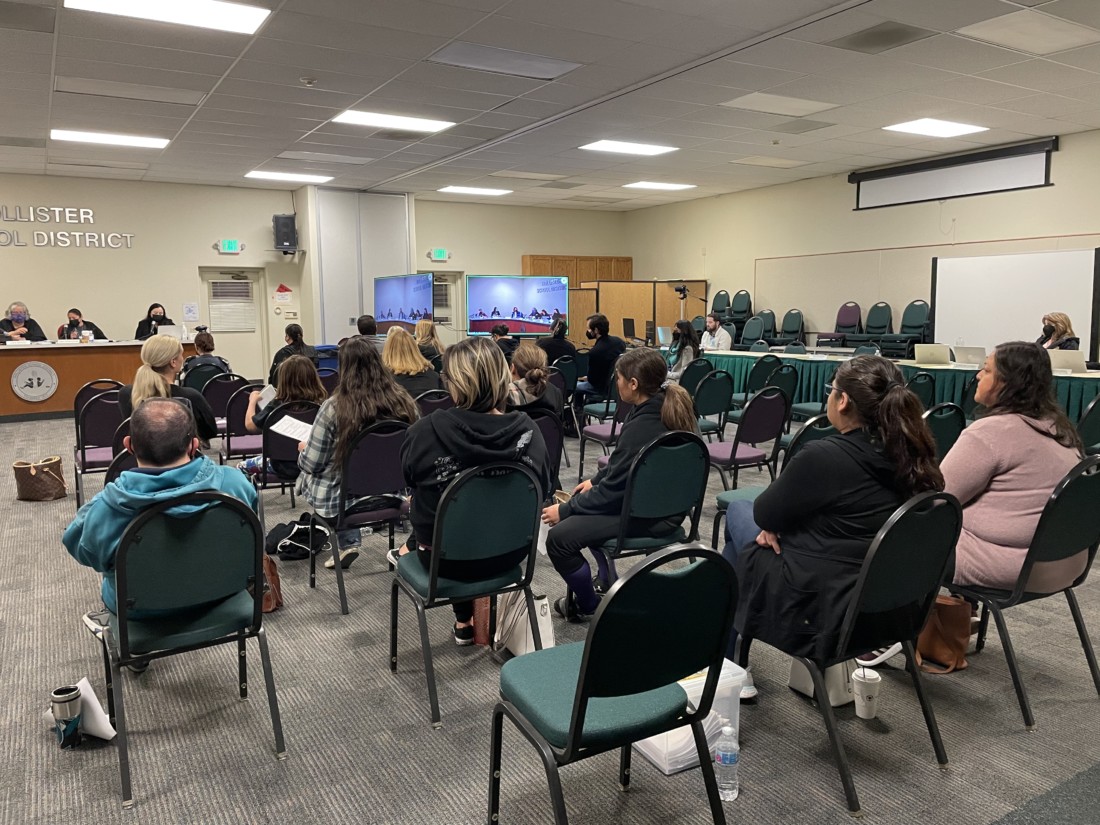 Robert Eliason contributed to the reporting of this article

Hollister School District’s Board of Trustees voted March 10 to lay off an additional 26 staff for the upcoming school year. The decision came one week after a March 3 special meeting where the board voted to eliminate 33 staff, making a total of 59 personnel cuts.

HSD superintendent Erika Sanchez said the first 33 cuts only represented a budget adjustment of $2.1 million after identifying the individuals who would be laid off. The district is contending with an estimated $3.3 million budget deficit.

“We needed to wait for the second interim [report] to be able to determine where it is that we are financially,” Sanchez said in her budget update to the board.

Sanchez said 93% of the district’s budget is spent on personnel salaries and benefits, and noted there was a requirement by the San Benito Office of Education to reduce that number to 90% or less.

While members of the public as well as board members asked for the current percentage of budget spent on staff after layoffs or even a ballpark figure, Sanchez insisted final numbers need to wait for the second interim budget report, which is required to be finished on March 15.

The district’s $3.3 million deficit would have been higher if another several million dollars had not been switched from restricted to unrestricted funding sources in a one-time move. On March 3, that adjustment amount was said by staff to be $2.7 million, but Sanchez reported to the board on March 10 the number became $5.9 million once adjusted, inferring that the total potential deficit may have been closer to $9.2 million. Sanchez did not explain why the adjusted amount more than doubled.

“Had we not moved it to one-time funds that expire and are not renewable, there’s several people in this room and at our sites that would not have been able to be paid for the remainder of the year,” Sanchez said of the $5.9 million.

In addition, one migrant coordinator would have district contribution to funding pulled, resulting in savings of half a full-time employee’s worth of costs. The board measure for new administrative layoffs also included a restatement of the layoffs of two assistant principals and 1 HR analyst as a legal re-vote due to inaccurate wording on the prior vote.

Trustee President Carla Torres-Deluna and trustee Jan Grist opposed both the certificated and classified staff reduction resolutions. The board voted unanimously in favor of the administrative layoff resolution, as well as a resolution giving the district options to negotiate for reduced employee compensation.

“It is our responsibility, it is our fault for not asking questions, the right questions, for not understanding the budget the way we should, for trusting and not verifying,” Torres-Deluna said.

She also noted the information for the night’s meeting had been given to the trustees shortly before the board meeting, and that was the basis for voting against two of the layoff resolutions.

“I learned a lot in closed session that I did not know, and I’m just digesting it,” she said. “I don’t feel comfortable making a decision that’s going to impact people’s lives right now based on information I heard an hour or two ago.”

Sanchez reminded the public that the board’s votes for layoffs did not guarantee the affected employees would all lose their jobs.

“It starts the layoff process, but it does not end the layoff process,” Sanchez said, noting the final determinations could happen in May. “The resolutions that were approved last week and those that are going to be considered tonight will allow the district to have the flexibility should it need to move forward with staffing reductions.”

Dozens of teachers, students, and parents were outside the meeting before it began holding signs questioning the need for another staff cut decision which would almost double the cuts made one week prior.

“I know an apology isn’t enough, it is not, and I’m not even going to attempt to go there,” Trustee Elizabeth Martinez said. “All I can say is I’m sorry.”

“You’re about to let go of almost a tenth of our staff, 8.7% if you include the previous layoffs,” Hollister Elementary School Teachers Association (HESTA) President Nicole Felkins said. “That’s insane and that’s just for HESTA alone.”

Numerous speakers expressed disappointment with the board during public comment, some calling for their resignation.

“As a board you had a fiduciary responsibility to the community, and you failed in that responsibility,” Ann Vasquez, a life skills teacher, said. She also blamed the board of incompetence.

“The fiscal situation that we all find ourselves in is the sole responsibility of each trustee and the superintendent,” Cheryl Rios, a speech language pathologist, said. She called the situation “unimaginable” that the board didn’t realize the budgetary problems.

Multiple commenters also called out the board for not being more critical of former superintendent Diego Ochoa, despite board member allegations he was the cause for many of the deficit problems. Public commenters also highlighted the importance of physical education, counselors and nurses, and the negative effects on kids from losing so many of those personnel.

“Our situation is embarrassing, it’s shameful, it’s a joke,” Erica Robledo-Dickens, a seventh-grade math teacher, said. She questioned whether a county takeover of the district might be a preferable solution. “We’re gonna have big class sizes, less services, more problems.”

Catalina Johnson, a second grade teacher, mentioned experiencing past budget cuts which led to classes with 40 students and kindergarten classes with up to 38 students.

Diane Smith, a library media specialist, asked who would be expected to take up the work of so many laid-off personnel. She noted the district is at a 1:1 ratio with students and Chromebooks, meaning a need for tech support.

Smith was also one of numerous commenters who asked about the $10 million budgeted for books and supplies. Of that money, $1 million had been listed as spent, with $9 million left to spend.

Sanchez later said the fund for books and supplies had been used to store other funds that didn’t belong in that listing, with $9 million being freed up to use in other areas of budget balancing after it was discovered. She explained the $1 million had been spent on Chromebooks.

Sanchez said much of the district’s problem was spending which went unmonitored, pointing to the hiring of an additional 49 positions in the current school year and the recent completion of a $52 million campus.

“We never as a district talked about how we were going to fund all of those new positions,” Sanchez said. She said such failures to plan were the collective responsibility of the entire community.

Sanchez said the board’s inaction on balancing the budget now could lead to not only compounding the district’s debt, but a county takeover of the district’s finances.

Budget matters Sanchez said need to be considered as the district moves toward final numbers are a $925,000 contracted increase in employee compensation; $636,000 in increased payments for retirement and unemployment insurance; and a $1.7 million increase in expenditures for custodial positions that were shifted into the one-time funds during this fiscal year.

Sanchez and the board also discussed the average daily attendance estimate of 53%. Grist said the estimate constitutes a reduction of $2 million in state money for the district and said she needed to hear an updated number before voting for layoffs.

At the Hollister School District Board of Trustee meeting on March 14, Superintendent Erika Sanchez requested that the board consider changing her contract to allow for five unpaid furlough days “to assist in reducing district expenses given the current structural deficit.”

Her request was passed unanimously by the Board of Trustees.

The change would allow the board to approve five unpaid “furlough” days in the 2021-22 school year which Sanchez hoped would be seen as her “acknowledging and knowing the structural need to make changes in our budget.”

The agreement does not specify which days would be taken off or whether they would be taken concurrently. The unpaid time off would be reflected in the current year’s budget.

Sanchez’s gesture comes on the heels of a report to the board on Feb. 15 outlining a potential $6 million budget shortfall for the year which led to decisions at the March 3 and March 10 meetings to cut 33 and 26 staff positions, respectively.

Falkins told BenitoLink Sanchez’s gesture was a “drop in the bucket.”

“It is more of a symbolic gesture of accountability in owning up to the fact that she was assistant superintendent while the budget fiasco took place,” Falkins said. “It’s only about $5,000 she will miss out on of the $200,000-plus she makes every year and it is probably just a five-day vacation, so that’s a break. But I do understand she has been working very, very hard and we all want this budget resolved.”

HESTA is planning a protest at the corner of San Benito Street and Sunnyslope Road on March 16 at 4 p.m. 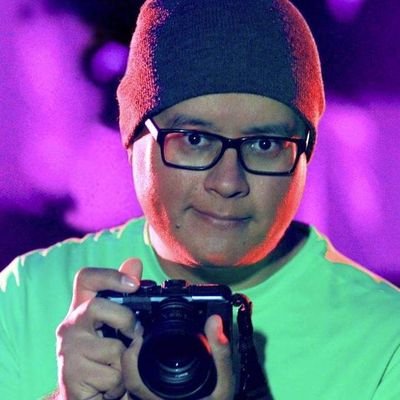 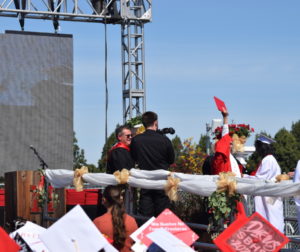 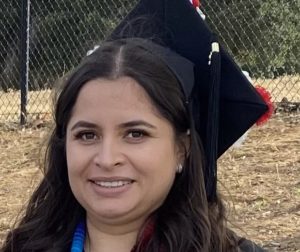