Hollister city council passes shopping cart ordinance that will affect homeless, residents who use them to take groceries home, and businesses. 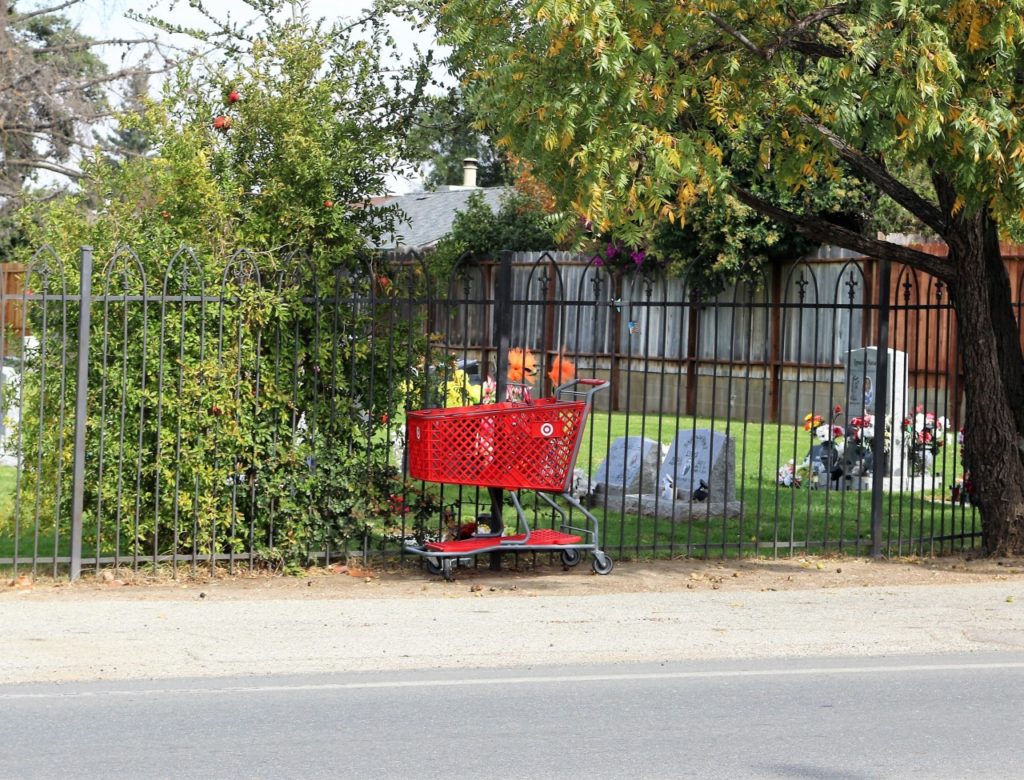 I will discuss with our reporters and see if we can get something going soon. Such is the case for one Hollister homeless man spotted sleeping on a concrete slab in Dunne Park as his purloined shopping cart stood nearby overflowing with his worldly possessions. Hollister’s homeless who tote their belongings around town in shopping carts, as well as residents who “borrow” them to take groceries home, could soon be facing fines when the city’s newest ordinance takes effect January 2018.

The official reasoning behind the ordinance is that the council determined abandoned shopping carts on public or private property represent a public nuisance and impede emergency services, reduce property values, promote blight and deterioration, create potential hazards to the health and safety of the community, and interfere with pedestrian and vehicular traffic. The state legislature authorized cities to adopt such ordinances under the California Business & Professional Code (B&P). Sacramento declared that abandoned shopping carts represent a statewide public health issue, a threat to safety, and the very quality of life of all Californians.

Under the ordinance, the homeless could most likely be affected. While the ordinance spells out that it is illegal to remove a cart from the premises of the owner, it is open to interpretation when it comes to penalties. It states that the person will be subject to “procedures permitted by law, including but not limited to prosecution of a misdemeanor or infraction, civil action for injunction, administrative citations and enforcement procedures, and revocation of a use permit, if applicable.”

Some may think it pointless to fine or arrest a homeless person for vagrancy or public intoxication, much less caravanning with a shopping cart, because it’s well-known that, for the most part, they are not prosecuted or even accepted in the local lockup. There is off-the-record talk, though, that once the new homeless shelter opens the legal apparatus may be more open to prosecuting such cases should the individuals not take advantage of the shelter and abandon their nomadic lifestyles on the streets.

The bulk of the ordinance enforcement, which will be carried out by the city’s code enforcement department, will fall on businesses. Within 180 days from the Nov. 6 council meeting, stores that provide shopping carts will be required to implement measures to prevent their removal. Measures might include: (1) Increased signs directing customers not to remove the carts from the premises. (2) Employee assistance to carry purchases for the customer. (3) Providing   personal carts for customers for rental or purchase. (4) Physical barriers located at doors, near  loading  areas or other defined perimeters that will prevent the passage of carts beyond the  premises barriers. The physical barriers may also be placed on the carts themselves so that the carts cannot pass though door openings or other defined perimeters. (5) Electronic disabling devices on all carts, which are activated when they cross a barrier at the perimeter of the premises. (6) Any other reasonable containment measure that has been proven to be successful.

Once the ordinance goes into effect, if five or more carts are discovered off-premises in any seven-day period, code enforcement will issue the store owner a warning notice. The ordinance states that only one such notice will be issued in a calendar year. While no penalty seems to be attached to more than one warning, the store will be required to submit a mandatory cart containment plan to code enforcement.

During council discussion before the ordinance was adopted, Soren Diaz, city attorney described one section directed at those who remove the carts as the “teeth to enforce the ordinance.” He said it specifies that it pertains to not only those who actually take the carts, but those who may be in possession of a cart with the intent to temporarily or permanently deprive the owner of the cart.

“This is going to go a long ways toward removing the unlawful use of shopping carts in locations other than business establishments that provide them for their customers,” he said.

Councilman Jim Gillio said he was concerned about how small businesses might be affected by the ordinance, particularly if they are required to install electronic disabling devices on their carts. Diaz responded that a small business could pick from the list of proposed measures, as long as it is effective. Gillio said he would like to see the city reach out to businesses prior to the ordinance going into effect so they have time to prepare for it.

Councilman Karson Klauer wondered if there was any mechanism to inform those who have taken the carts that they can no longer have them.

“If they’re pushing a shopping cart miles away from the supermarket somebody should probably tell them, at some point, that’s not going to be okay,” he said.

Bill Avera, city manager, answered that code enforcement personnel could, as they come in contact with individuals with carts, give them notice. Klauer asked what happens to carts that the city picks up. Avera told him they are normally stored at the city’s maintenance yard. Avera said the city tries to return the carts to the owners before recycling them. The city disposed of more than 150 carts about seven months ago, according to Mike Chambless, management services director.

“If you go around residential areas you see shopping carts in front of homes in their yards, so it’s not only the people who are pushing the carts in the city,” she said.

Mayor Ignacio Velazquez, who has been concerned about the issue for some time, said it’s important to work with local businesses and residents as partners.

“The goal here is not to penalize them it’s to make sure we don’t have abandoned carts throughout the city,” he said.

“It’s going to cut into the budgets of our senior citizens or anybody on fixed incomes,” he said. “Have you done a cost analysis on how it’s going to affect them?”

Diaz said he had not, but explained the ordinance was conducive to state laws already in place. Artman was not satisfied with that answer.

“This city council can run this town anyway it wants to,” he responded as he asked again what costs would be passed on to consumers because of the ordinance. When Diaz referred back to his first response, Artman said, “Well, we’re not getting anywhere.”

The mayor then interjected that the goal was to get the carts back to stores, which would most likely save consumers money. He added that residents can take carts from store locations if they get permission from the stores.

Councilman Ray Friend commented that stores are most likely already charging their customers when carts are stolen and reasoned that if they aren’t stolen there will be a savings to customers. Artman maintained his dismay that Diaz could not provide data from a cost analysis.

During a non-scientific drive-around-town study, BenitoLink discovered that the shopping cart cause cé·lè·bre comes from Target. The familiar red carts were found on residential streets, in the Safeway back lot, and along Hillcrest Road. Safeway is one store that has been proactive in protecting its carts by installing electronic mechanisms on the front wheels that lock if someone attempts to take them beyond the parking lot.

According to a study by the Food Marketing Institute, nearly 2 million shopping carts are stolen each year. This translates to an $8,000 to $10,000 loss per store annually. The study did not include stores other than in the food industry.