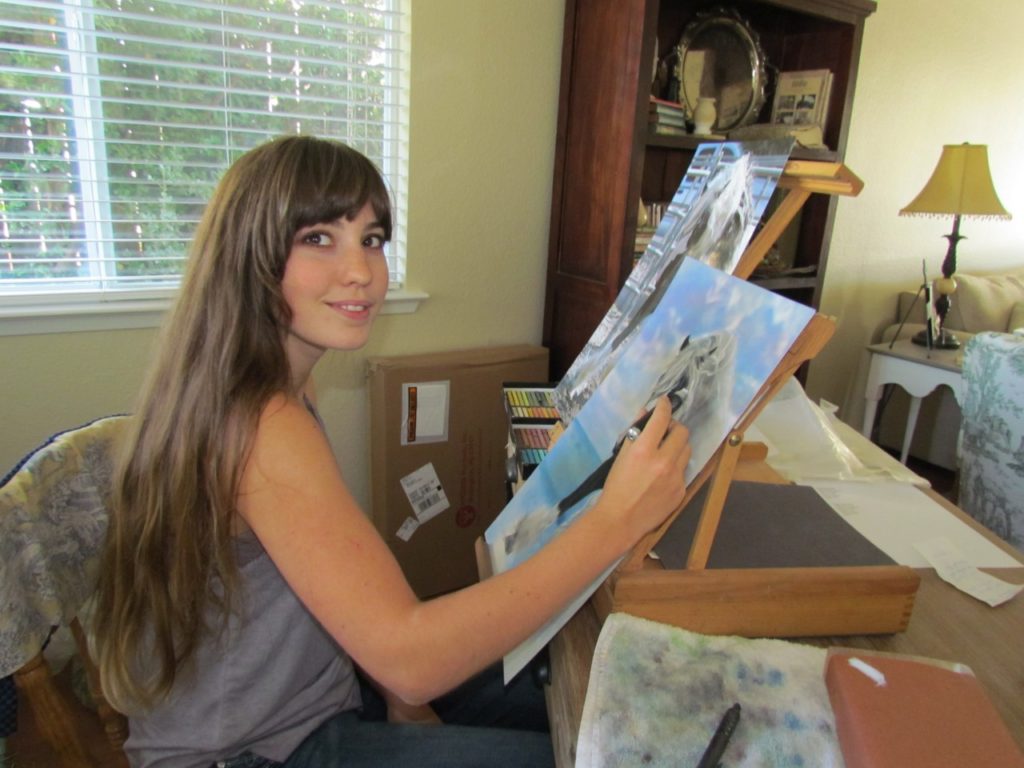 Nineteen-year-old Abigail Dunnivan was recently commissioned to paint the poster for the 2017 San Benito County Saddle Horse Show. Before that, however, she has entered two paintings in this week's San Benito County Fair art competition.

The horse show commission comes just as Abigail has taken on a new beginning — her own business, called AbbyRoseHeartWorks. Still grieving for her recently-deceased father, grandmother and uncle, “this is my next step," she said.

Through her business, Abigail creates commissioned art from pastels. She paints from the new home she shares with her mother, Denise, and sister, Jessica, in Hollister, where they are establishing a new life.

The subjects of her work, mostly animals and children thus far, come to her through word-of-mouth recommendations, including the recent painting of a little girl with a horse.

Abigail was homeschooled, which she said she enjoyed. “It gave time to bond with my family and to get one-on-one attention with struggles,” including math, she noted with a grin. “It is good curriculum and you’re not left in the dust,” she said of homeschooling.

Her future in art was destined from the time she could hold a pencil — around 2 years old, according to her mother, Denise Dunnivan.

“I copied from what my sister was doing,” Abigail said.

Denise, as part of the curriculum, assigned her daughter to read the book, Never Cry Wolf. She asked Abigail to draw something realistic. So she did. It was a wolf.

“My artwork just bloomed after that,” Abigail said.

Abigail recalls meeting John Harrison in a Carmel Gallery, and became friends with him and his wife, Leslie, a well-known pastel artist who also works on commission and teaches art.

Abigail attended Leslie Harrison's class in Sutter Creek at age 14 and a mentorship grew out of that. She complimented Leslie as an artist and teacher who is generous and supportive.

Pastels became the young artist's preferred medium, she said, because of the ease of making changes, and also for the detail she is able to deliver.

The two paintings she picked to show in the 2016 San Benito County Fair were of an eagle she painted in memory of her father, and the other, a bay horse.

“I am created to create,” Abigail said, and that is what prompted Denise to visit the fair office at Bolado Park to suggest her daughter’s work for the Horse and Saddle Show poster next year.

As a side note, horses aren’t new to Abigail, as she was taught to train them and has worked with special needs kids in an equine therapy program called Dream Power.

After Abigail’s work was seen by fair officials, she was given the go-ahead to create the poster.

Meanwhile, Abigail continues to move forward with her work and is always eager to accept commissions.

She may be reached by email at [email protected].