To qualify for the National High School Finals Rodeo in Wyoming, contestants were required to compete at the state level. 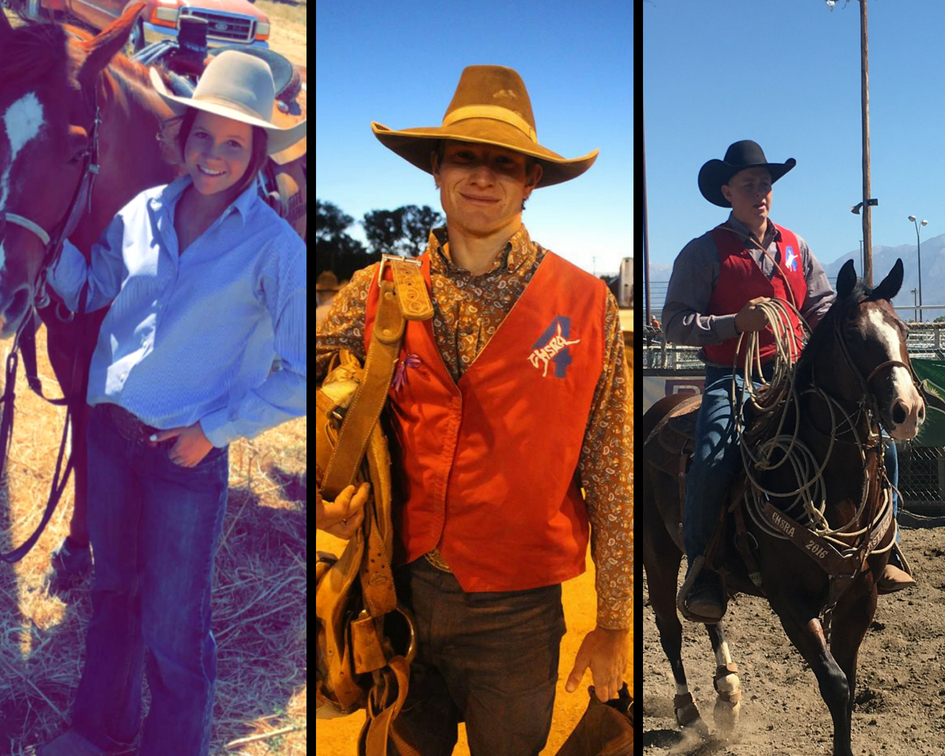 Three Hollister teens kept their rodeo seasons alive at the state finals with strong enough finishes to compete against the top high school cowboys and cowgirls in Rock Springs, Wyoming, the week of July 15–21.

Lilla Bell, Jake Bourdet, and Tristan Naccarato, all of Hollister, beat out hundreds of other rodeo contestants to place in the California High School Rodeo State Finals, which took place in Bishop in mid-June.

Bell, who recently completed her sophomore year at San Benito High, wrapped up her second year in the California High School Rodeo Association with a third-place finish in the girls’ breakaway roping along with a fifth-place mark in the reined cow horse.

This year will be her second appearance in national competition—in 2016 she qualified for the National Junior High Rodeo Finals in Lebanon, Tennessee, where she placed third in nation for the girls’ breakaway.

“It’s such a humbling experience to be able to compete against some of the tough competitors across the nation,” Bell said.

Bell is up with her first run in breakaway roping starting July 16 and her second run on July 20.

“I love competing in rodeo and meeting new people,” she said. “The whole experience going to nationals is worthwhile.”

Bourdet just finished his sophomore year at San Benito High and will be making his second trip to nationals.

He had a successful and consistent state finals, finishing as the reserve state champion tie-down roper.

Throughout the season, Bourdet also competed in the team roping with Lilla Bell, but fell short at state finals to qualify for nationals.

“I’m very proud to represent San Benito County and CHSRA District 4 at the national level cause I’ve grown up here,” he said. “This is where I learned everything I know about rodeo.”

He will make his first run in the tie-down roping on July 17 and then again on July 19.

“I am looking forward to competing against the best ropers from all around the nation and getting to compete in such a tough rodeo,” he said.

A graduate of San Benito High, Naccarato qualified for nationals in the saddle bronc riding after a third-place finish over the season in the event.

“I’m excited about going to the high school finals because it is the highest you can go in your high school career,” he said. “I am proud to be representing our state and district 4 because most of my family competed in district four and the same state as well.”

Naccarato is set to compete in the saddle-bronc riding on July 16 and climb on his second horse on July 20.

In past years Naccarato qualified for the high school finals in Wyoming and Silver State International Rodeo in Winnemucca, Nevada.

“I am looking forward to getting on some tough bucking horses in Wyoming,” he said.

Madison Camozzi of Petaluma qualified in the pole bending to the high school finals. She ended up the reserve state champion pole bender at state finals.

With more than 1,500 participants from around the U.S., competition at the high school nationals rodeo will be a new and exciting challenge for the high schoolers.

Contestants compete for prize money, college scholarships, and the chance to be named a National High School Finals Rodeo Champion.

To follow your local favorites at the nationals, go to the NHSFR California National Team 2018 or visit www.nhsra.com for complete results.