The Hollister City Council passed an ordinance that will prohibit the growing, processing or sale of recreational marijuana for at least 45 days until a decision can be made to make it permanent or modify it. 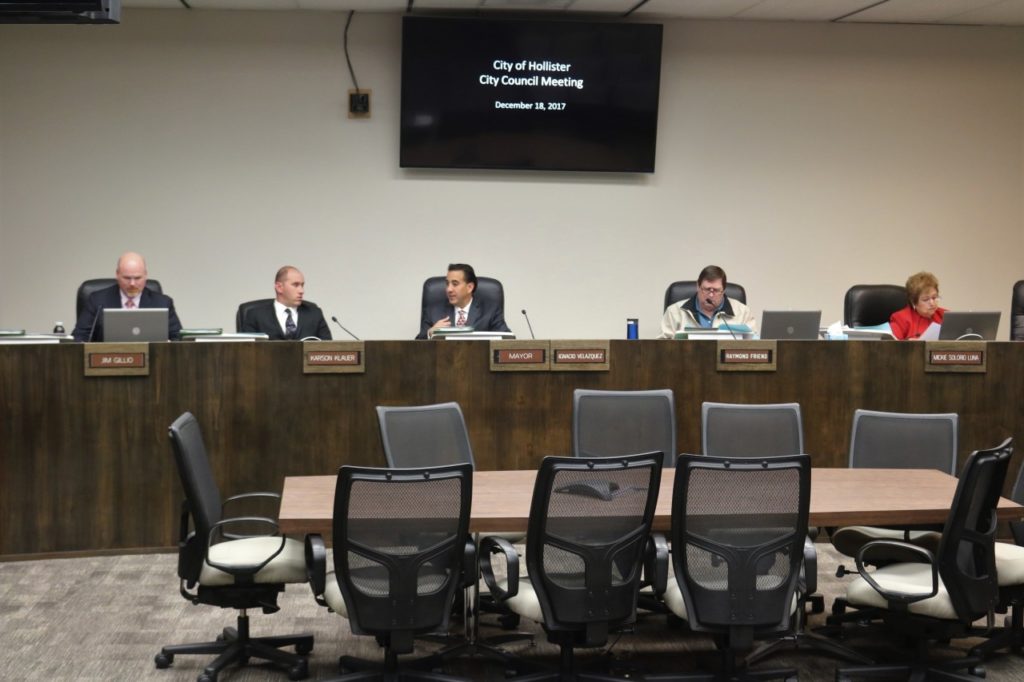 As the legalization of adult-use, or recreational marijuana, in California approaches Jan. 1, 2018, the Hollister City Council unanimously passed an urgency ordinance Dec. 18 to prohibit for 45 days the cultivation, processing, manufacturing distribution, testing, and sale of non-medical cannabis in the city. The resolution also set limits on personal cultivation of either non-medical or medical cannabis, as defined by Division 10 of the California Health and Safety Code.

The city passed the urgency ordinance, according to city documents, to maintain the immediate preservation of public peace, health or safety.7. The city decided to make the move despite the fact that California and San Benito County voters approved Proposition 64 on Nov. 8, 2016, and the state will begin issuing licenses after Jan. 1.

The portion of the ordinance that generated much of the discussion between council members concerned not only how many plants could be grown for personal use, but how many people were included within a private residence. The ordinance also differed from state law, but fell in line with what the county had recently passed, in that the plants for personal use had to be grown indoors, rather than on the property. The county, though, also added that stipulation that even those growing marijuana for personal use had to register to do so. The city did not add this to its ordinance.

Bill Avera, city manager, told the council a 4/5 vote was needed to pass the ordinance. For one of the few times that the discussion was about marijuana, council members Karson Klauer and Jim Gillio, along with City Attorney Soren Diaz, did not recuse themselves because of potential conflicts of interest.

“This ordinance is essentially valid for 45 days from today,” Avera told the council. “Staff will be coming back either with findings to continue with this particular ordinance or provide you with enough information for you to adopt a permanent ordinance related to adult-use cannabis.”

Councilman Ray Friend asked for clarification on whether the ordinance had any effect on medical cannabis. Avera said it did not. Councilman Jim Gillio said he did not see any reference in the ordinance to personal grows indoors that might be located near sensitive areas, such as schools. He said he has already had complaints concerning odors. Avera said he is not an expert on the law, but was sure the city could not prohibit indoor cultivation at a private residence, under Prop. 64. Mayor Ignacio Velazquez questioned if the plants have to be indoors and asked if the state is mandating it. Avera replied the city is mandating it. Velazquez said he thought the previous ordinance spelled out that there would be no more than six plants on the property and there was no mention of indoors or outdoors. Avera maintained the ordinance would specify that the plants be grown indoors and out of sight of neighbors.

Councilwoman Mickie Luna questioned the 45-day moratorium and whether it would be coming back before the council. Avera described the 45 days as a “prohibition” and explained that was the case and that what staff would bring back would be more in line with the ordinance for medical cannabis. Diaz told the council that what they had to determine at the meeting was if there was a “current and immediate threat to the public health, safety and welfare.”

“You’re authorized under your police power to make that finding to enter into this temporary moratorium for 45 days,” Diaz said. “What will happen on the 35th day of the 45-day moratorium, is staff will have to present to you prior to the expiration of 45 days a written report describing the measures that we’re taking to either alleviate the conditions that are being addressed by this moratorium or the need for a further ordinance.”

He explained further that the council could extend the moratorium for up to two years. The mayor asked if Jan. 1 would have an effect on the city’s actions. Diaz said it was his understanding that as of Jan. 1, adult-use of marijuana might be legal, but the city was setting limits of its use.

As might be expected, the decision did not set well with many marijuana advocates in the crowded council chambers. Sal Palma asked the council to reconsider the ordinance as soon as possible. He commented that based on the state’s regulation there will be little to no incentive for people over 21 years old to pay for a doctor’s recommendation for medical cannabis.

“The medical market will likely be less than five percent of the overall cannabis market statewide,” he claimed. “It will be primarily comprised of 18 to 20 year olds that are unable to procure adult-use cannabis.”

He said wholesalers in adult-use cannabis will be forced out of the market, for the most part, which will significantly reduce anticipated tax revenues to the city, as well as jobs for its residents.

Chris Orosco, who has submitted multiple applications for cultivation and manufacturing of cannabis to the city, asked that the council make a distinction between consumer sales and the business-to-business sales.

“The projects we have already submitted are going to be heavily scrutinized for odors and proximity to schools or residents, zoning issues and security best practices,” he said. “These projects we are proposing for this community would actually pay revenues north of $50 million in the next 10 years. These companies are already facing a marketplace much broader than medical sales.”

Dr. Cammon Arrington brought up the issue of the number of plants that would be allowed in private residences. He pointed out that it is well known that the yield from the cannabis plants is directly related to the amount of light, or power, consumed. He said there should be consideration to fire safety if people were to believe that the six-plant limitation was “per person” rather than “per residents.” He extrapolated that if 10 people claimed to reside at the same residents that would mean there could be 60 plants, which would require a tremendous amount of power.

Sean Donohoe commented that there really wasn’t much of an urgency because those over 21 have been able to legally grow six plants since Nov. 9, 2016.

“What is going to change come Jan. 1 is state licensing,” he said. “It will put in place quite a lot of regulations regarding medicinal and adult-use operations. There also will be a whole lot of taxes from the state: 15 percent excise taxes for both and on top of that $148 per pound of taxes for both. What you’ll end up seeing is a differentiation of the market between adult-use and medicinal operations.”

Donohoe explained that Los Angeles, which he said is the largest market in the world, will be accessible to every operator in Hollister if they’re in business. He said Los Angeles will tax five percent at retail for medicinal and 10 percent for adult-use at retail.

“They’re going to authorize a lot more adult-use shops than medicinal because they want to fill their coffers,” he said. “If businesses that are authorized by Hollister aren’t able to sell into that adult-use marketplace come Jan. 1, they will have a significant competitive disadvantage.”

He encouraged the council to revisit the ordinance as soon as possible so “we can be well poised to compete in the largest market in the world.”

As the cannabis proponents presented their case for acceptance of the reality that adult-use cannabis will be the new normal for the marketplace and Hollister would lose a golden opportunity to be a part of it, this only provided proof to the opponents that they had been right all along about the marijuana industry’s ulterior motives in supporting medicinal marijuana.

Jack Kirk, who started out two years ago as an outspoken opponent of any form of marijuana, but came around to agreeing that perhaps medicinal use was warranted, thought it interesting that the original intent was to help 5,000 people in the county who needed it for health reasons.

“Now, that’s changed, huh?” he said. “Now we have Sal and others talking about recreational marijuana. We worked hard to put a medical ordinance together and now we need to embrace this or we lose money and jobs. It’s sad for our community.”

Councilman Klauer said he doesn’t normally agree with Becerra, but in this instance, he does.

“Everybody who has a permit at this point applied and received that permit under the medical cannabis ordinance and it would be wrong to assume anything is going to be promised going forward with a new ordinance for adult-use,” Klauer said. “That conversation probably needs to be had, but I wouldn’t expect anything.”