Developer argues he should not have to pay a $2.2 million park fee as the project includes a community center for its residents. 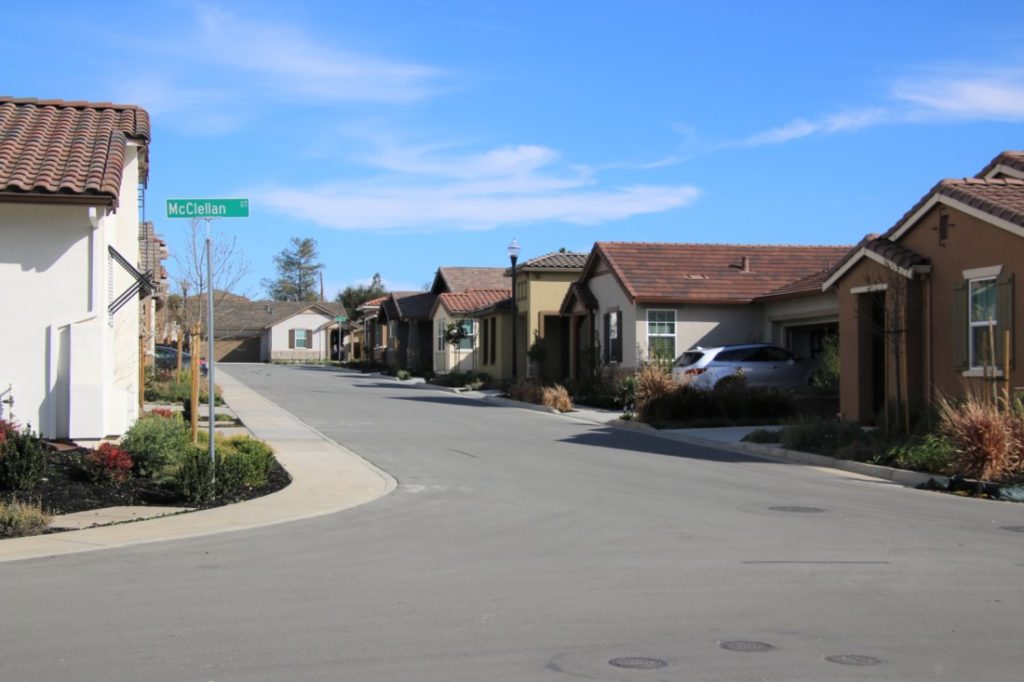 There are only a couple dozen homes completed at Twin Oaks, with a goal of 170. Photo by John Chadwell.
×

Marty Miller, the developer of Twin Oaks, a gated community in Hollister designed for active seniors, lost his bid to reduce impact fees that add more than $33,000 to each new home in the 170-unit project alongside Valley View Road. At its Jan. 19 meeting, the Hollister City Council decided in a 4-1 vote not to bring the issue forward as a resolution.

According to Hollister planning manager Abraham Prado, in the February 2008 performance agreement between Miller and the city, impact fees for the City Hall/city yard, police, sewer treatment, and sewer collection were calculated as a percentage of normal impact fees based on the assumption that there would be a maximum of 1.67 occupants per unit.

“Mr. Marty Miller is asking for this reduction in impact fees due to the sales at Twin Oaks running at a 1.53 household density, and that’s per Mr. Marty Miller,” Prado said. “The homes being built are actually single-family homes of two bedrooms mostly. It’s my understanding that some of them are actually going to be three bedrooms, which is why the single-family home impact fee is being applied.”

Miller was requesting that each home be considered a multi-family unit, whose impact fees are based on a lower 1.51 household density.

The Twin Oaks development has an age restriction requiring that at least one occupant of each unit is 55 or older. Prado said Twin Oaks has a Codes, Governance and Restrictions (CC&R) that regulates that “all members of each household shall have a minimum age of 55 years of age, with the exception of a spouse, significant other, or caregiver, or a child that may have disabilities.” He said the CC&Rs do not restrict the number of persons per household to an average of 1.51, and noted that while the city appreciates the information Miller provided, it does “not necessarily mean that future sales can’t bring the density up to three residents or higher per unit.”

Over the years, Miller agreed to be responsible for all applicable impact fees. This proved to be the main sticking point for council members and why they turned down his request. Neither city staff nor the City Council was swayed by Miller’s concerns. Councilwoman Honor Spencer was the sole supporter of reducing fees for a senior community.

“The impact fees can certainly ‘impact’ our bottom line, but it’s the market that determines the price point of homes for sale in the area, including ours,” Miller told BenitoLink. “All developers are dealing with the same issue. We’d just prefer not to pay for impact that we’re not creating.”

Miller said other builders have also had to increase their prices over the last month.

“Rising labor costs, material shortages, and impact fees all contribute to that,” he said. “Impact fees are currently $33,681 per home. City officials indicated another likely increase for the July 2021-22 fee schedule.”

Fees and labor costs, though, are not the only impact on the senior community’s construction and selling progress.

“We definitely had a slower start than expected due to the pandemic,” Miller said. “In our business, it’s all about getting potential buyers into our homes to see what a beautiful product we’ve created. Now that more people know they can tour safely and more people know what we’re creating here, the momentum is accelerating.”

In particular, neither Miller nor Spencer believed Twin Oaks home buyers should have to pay a $13,732.12-per-unit park fee, totaling $2.2 million, to build a small park behind Hollister Fire Station #2, adjacent to the community. He told the council that the project would eventually include its own 4,700-square-foot community center with a pool and other amenities. Miller argued that residents, or visiting children, would not use the park. He said current residents had been polled on their use of local parks and that none said they used any of the parks.

In response, Prado said, “It’s great to know that there is going to be on-site amenities and the recreation facilities for residents, but it’s going to be a private development,” he said, “and, as you know the city of Hollister recently adopted a parks facility master plan, which indicates we should have five acres of parkland for every 1,000 residents.”

Prado reasoned that the planned park by the fire station should be financed by the residents of Twin Oaks, and even though they would most likely use their own facilities, their grandchildren might use local parks.