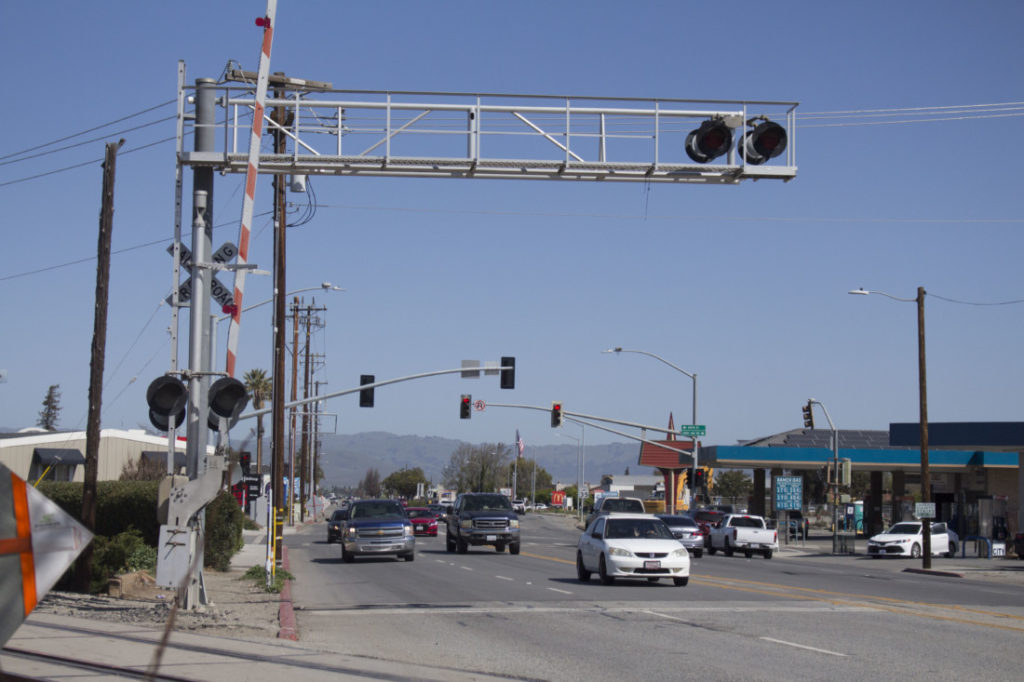 Railroad lights near the corner of San Benito and First streets. Photo by Noe Magaña.
×

Editor’s Note: This article was updated on April 1 to include information from the San Benito County Behavioral Health Department.

The Hollister Police Department arrested a transient woman on March 28 after she climbed up and stayed on railroad crossing lights for four hours. Police charged her with trespassing on railroad property, a misdemeanor.

“She refused for about four hours to come down until she finally did,” Reynoso said.

Reynoso said the Hollister Fire Department parked an engine underneath Parra in case she fell, and later inflated a boxing ring jumper intended for parties and placed it underneath for her safety.

According to Reynoso, Parra had two outstanding warrants: one for smuggling drugs into jail and another for failure to appear at a court hearing. Though police believe she was intoxicated, she did not receive any alcohol-related charges. Reynoso said Parra has a history of arrests related to controlled substance abuse.

Parra was not taken to the hospital for a mental health evaluation, Reynoso said, as she was not cited under section 5150, a Welfare and Institutions Code which allows a person with mental health issues to be involuntarily held for a 72-hour psychiatric hospitalization.

HPD and the San Benito County Behavioral Health Department are creating a crisis response team (CRT) to handle cases involving mental health. HPD called Behavioral Health to request support, but the department was unavailable as the team is not yet active, Reynoso said, adding that he hopes the team will be active as early as next month, but it depends on how soon training is completed. He noted that COVID-19 has caused several training session cancelations.

Max Cendaña, quality improvement supervisor with the Behavioral Health department, said though HPD did request assistance, new staffing and lack of  internal communication caused the team to not be deployed.

“We are definitely going to take that opportunity to train more and make sure that all of our workers have the information that they need, and they have a good realization what our options are because the last thing we want to do is say, ‘we can’t come, we won’t come,'” Cendaña said.

Had the response team been notified, Cendaña said it would have likely been deployed as the team has assisted in at least six situations since the Board of Supervisors approved the program in last August. The behavioral health department also has qualified crisis clinicians or case managers that can respond to calls when the crisis response team is not available.

Cause of death is pending autopsy; San Benito Sheriff’s Office does not suspect foul play.