Police announced they are investigating a reported shooting on Nov. 5 on the 1100 block of  Sunnyslope Road.

Police said at 7:29 p.m. officers responded to multiple reports of a shooting and learned a victim had been dropped off at Hazel Hawkins Memorial Hospital.

“The hospital was put in ‘lockdown’ as part of the hospital’s standard procedure,” Police said. It added the victim suffered from two gunshot wounds and was stabilized and transported to a trauma center for further treatment.

“Their wounds are considered non-life threatening at this time,” police said.

The announcement on social media said police are investigating the incident as gang-related and have no further comment.

Police have reported five shootings since Sept. 25 including two cases on Aug. 24  that they said were possibly gang-related. 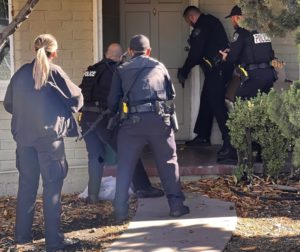 Suspected shooter has not been found.