The ages of the juveniles range from 12 to 16 years old.

In a releases on July 19 the Hollister Police Department said that it has been busy with calls involving guns and juveniles.

According to the release, starting on Thursday evening, around 11:54 p.m., Hollister police officers responded to the area of Wentz Alley and San Benito Street regarding a large fight with weapons. As officers arrived, they heard gunfire and saw people scattering in all directions. One subject was arrested for resisting officers at the scene. Officers located shell casings from two different weapons at the scene and determined that a fight broke out between two groups and ended in gunfire. The case has been turned over to investigations for more follow-up.

On Saturday morning around 3 a.m., officers responded to the 700 block of South Street regarding juveniles looking into vehicles. When officers arrived, a 14, 15, and 16-year-old fled in different directions and through backyards. Officers captured all three. Officers discovered one of the juveniles was in possession of property connected to a theft from a vehicle and he was arrested for that offense. The other juveniles were cited for curfew and other violations and all three were released to their parents.

Around 5 a.m. officers located two juveniles (one 16 years old, and the other 12 years old) running in the area of Central Avenue and Westside Blvd. One of the juveniles was in possession of a Glock “ghost” gun and ammunition, according to the release. It further states that those juveniles admitted to the illegal discharge of that weapon prior to being contacted by police. The 16-year-old was arrested on gun related charges and the 12-year-old was transported and released to parents.

On Sunday afternoon, officers were dispatched to the 800 block of Hillcrest Road regarding another gun call. In this case, a local Hollister resident found another “ghost” gun in the backyard of their house and wanted to turn the firearm over to the police.

Anyone with information regarding these investigations are requested to contact the Hollister Police Department at 831-636-4331. Persons wishing to remain anonymous may call WeTip at (800) 78-CRIME. Information provided to WeTip may qualify for a reward.

Behavioral Health is prepared to offer increased services in our community.

Charges range from discharging a firearm in a grossly negligent manner to attempted murder. 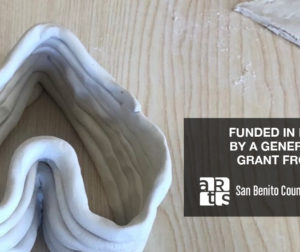 Therapy and Art program for the kids at Chamberlain’s