Probe focused on conversations with people who came forward. 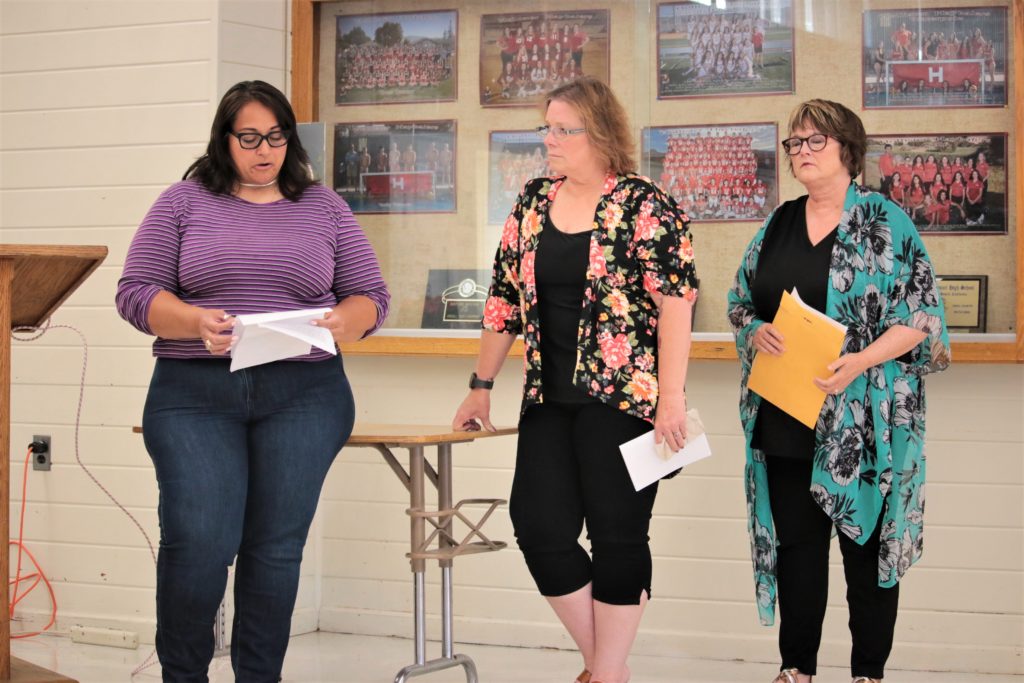 Parents Virginia Gardner and Susan Villa, and education advocate Kim Taylor told of their concern and frustration after reading an anonymous letter's accusations at a June meeting of the San Benito High School Board of Trustees. On July 10, Hollister Police said no criminal charges would be filed in relation to the letter's allegations. Photo by John Chadwell.
×

Hollister Police on July 10 said no criminal charges will be filed following an investigation into allegations of inappropriate sexual behavior in the San Benito High School special education program. The allegations were made in an anonymous letter mailed to parents of children in the Life Skills class, as well as to the San Benito High School Board of Trustees, Superintendent Shawn Tennenbaum, other staff, and education advocate Kim Taylor.

“At this point, we’ve spoken to everybody who has come forward and we haven’t, as of yet, found a criminal violation of any type,” said HPD Detective Bo Leland, who led the investigation. “We will not be recommending charges in the case. Of course, we leave cases open, so if anybody comes forward we’re willing to listen.”

He said the writer of the letter was not identified.

“That was not the focus of our investigation,” he said. “The letter served to open the investigation and caused us to reach out to people who were potential witnesses to determine if there was a criminal element in what was happening in the Life Skills program.”

Leland said people came in who had heard about the letter and that he contacted others who were recommended. He said he could not comment on what people said had happened in the classroom. He said the school was aware of the police investigation, but did not know if the school was also investigating.

Superintendent Tennenbaum did not respond to BenitoLink’s requests for comment.

Upon hearing that there would be no criminal charges, Taylor told BenitoLink she understood evidence is needed and the importance of keeping the investigation open.

“I have not had any communication from the high school, but I hope they are taking this very seriously,” she said. “School staff and administration are mandated reporters and also have civil rights obligations to students and parents. Sexual harassment and bullying must be taken very seriously. If this had occurred in Silicon Valley, company people could lose their jobs over something as simple as an inappropriate joke.”

“I believe nude pictures of the male anatomy were shared in front of students, and I believe that staff came forward and reported this to the administration and were bullied for reporting. This is alleged to have occurred in front of very vulnerable students who cannot speak for themselves.”

The unsigned letter caused Susan Villa and Virginia Gardner, parents of special needs children, to appear before the board of trustees to voice their concerns and file reports with the Hollister Police Department.

“According to the letter, my son’s aide was instrumental in reporting incidents to the San Benito administration, which she witnessed in the classroom,” Gardner told trustees, “and in light of her being moved it looks more like retaliation than change.”

The anonymous letter claimed no action was taken after an aide had been questioned about “vulgar conversations, pictures, videos and excessive phone use.” According to the letter, the aide said after she had been questioned that she only received “a slap on the wrist” and “would not get any consequences” because she allowed another school employee to keep their horses at her ranch and that they were friends.

“This situation has made it a hostile environment for students/staff,” the letter stated. It then listed a number of San Benito High School staff who, because they were friends, would take no action against the aide. The letter said the aide “has managed to show nude photos of herself,” and then went into graphic detail of alleged videos of sexual acts and a boyfriend’s genitals, as well as stating that the aide said she was tired of people saying who she could have sex with.

The letter also said that when another aide refused to lie about the incidents, she was bullied and threatened.

In addition, the letter accused teachers and staff of either ignoring or disbelieving the alleged behavior.

“The staff that have come forward were bullied!” the letter said. “Staff are in disbelief that this type of behavior is allowed without consequences.”

Gardner told BenitoLink she believes the letter’s claims because the allegedly bullied aide was her son’s aide. She said the aide had told her a number of times during the school year that something (which she would not specify) was going on in the classroom, and when these incidents happened she would remove Gardner’s son from the room to protect him.

Gardner said what upsets her most is that the school administration has not told the parents anything.

“That’s completely unacceptable,” she said. “How do you expect us to trust you with our non-verbal children? That trust is gone. And then for them to risk their livelihoods by going to the administration and reporting, then turning around to be harassed?”

She said the public needs to know if there is an ongoing internal investigation.

“What are they hiding?” she said. “Just the other day, they sent a broadcast email that everybody got and it seemed like a bunch of patting themselves on the back and assuring the public that San Benito is doing great. I’m glad for mainstream kids, but for the kids that need it the most and cannot speak for themselves, it’s an empty victory. Where is the damage control and why haven’t they made an effort to say what they’re doing and there is an ongoing investigation?”

Gardner wondered if anything will be resolved.

“It’s such a small clique over there and those people are working in fear,” she said, “and having to work under duress is disgusting to me. They’re not holding people accountable.”

Taylor said she met with a number of parents, including Gardner, on July 10 to discuss the investigation and the letter’s allegations. She said parents are seeking advice from an attorney.