Diego Ochoa still needs to be approved by a vote of the school board on Jan. 8. 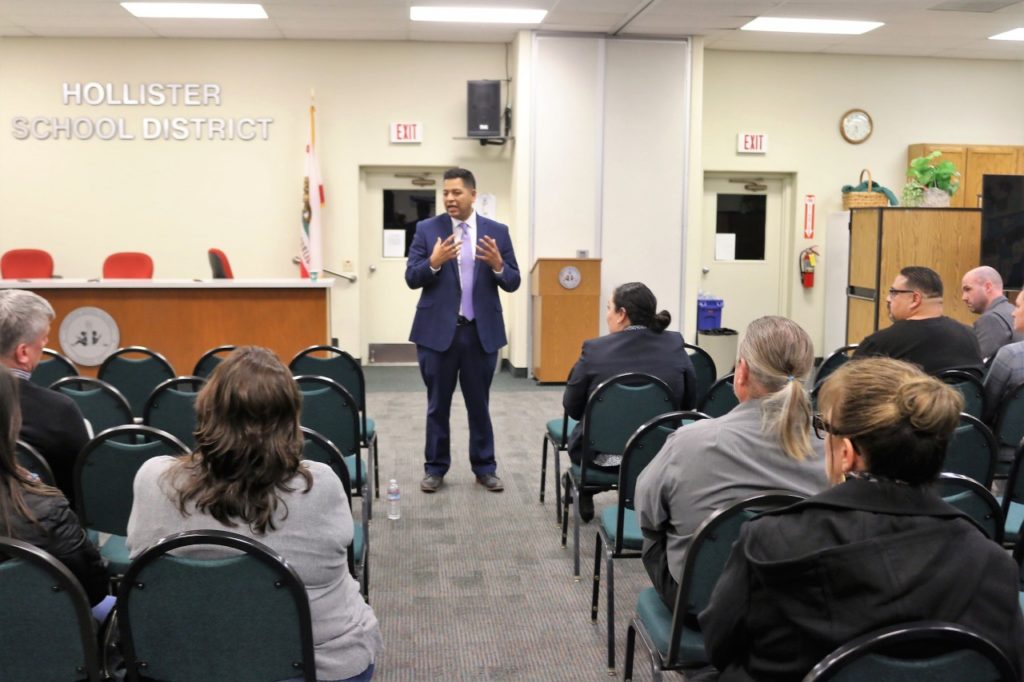 Diego Ochoa said he was looking forward to establishing trust with the community and tackling special education needs. Photos by John Chadwell. Hollister School District (HSD) Superintendent candidate Diego Ochoa, 41, appeared before a sparse gathering Jan. 7 at HSD facilities for a “meet and greet” with the public.

Nearly the entire conversation after Ochoa’s opening remarks to the group dealt with the state of special education in the district. As special education advocate Kim Taylor said, Ochoa was being presented to the public as the new superintendent, even though there remained a final vote on Jan. 8 to make it official.

“I thought, ‘Oh, crap,’ because we’ve been through two years of hell here,” Taylor said, “and you’re inheriting a community that has been so hurt, especially special ed. Trust in the school district is so hard to gain and it’s below zero now.”

Taylor told Ochoa it would be a challenge to find someone who could take on the job and it would surely test him.

“You’re going to have to show again and again that you get it,” she cautioned. “The Latino community is taken advantage of. Their needs are not being met, especially in special ed. What are you going to do to establish the trust?”

Ochoa explained that every meeting with parents is an opportunity to build trust. He said that it will take time and that he will not ignore the importance of building trust, and ultimately what people want is for their kids to go to good schools. He then said that he believed people would believe in him because he was willing to place his own children in the school district. This did not resonate with Taylor, though.

Special education aide Dorothy Howell told Ochoa that aides receive no training and are told to show up with little notice to serve a special needs child the schools are trying to mainstream.

“They’re bigger than you, they’re stronger than you, and when they get mad you know it,” Howell said, claiming she was once told to change a child’s diaper, stating that she is not supposed to touch a child in that way.

Parent Susan Villa said her adopted daughter had gone through the special education system and is now in high school. She said every concession she was able to get for her daughter she had to fight for.

“The parents have a negative trust of anybody in this district,” Villa said. “It makes me incredibly sad how special ed [students] are treated. And if they’re Hispanic, they have no chance in this district.”

Said Taylor: “Kids with dyslexia have missed out on years of education and they will never recover because we do not have a good dyslexia program in this district. Autistic kids have been thrown into emotionally disturbed classes where their behaviors have increased and we have to pay for kids to go to non-public schools that should be served in this district. There’s a difference between bad and egregious. What’s happened here has been egregious.”

Newly elected Hollister School District board member Jan Grist said her grandson is autistic and that her family has had its fill of the school district, which is one of the reasons she ran in the last election. She said the new board understands the issues and is excited to have Ochoa as its new superintendent. She asked that the community give the board time to make “some very big changes.”

“I have skin in the game and I’m committed,” Grist said. “I’m only one, but I do have a voice on the board and I plan to use it. I can’t speak for other members, but one of my reasons for backing Mr. Ochoa is his background in special education. I’m sure there are plenty of stories here about the poor performance and mismanagement in prior years, including this year.”

Ochoa said he was grateful to be working with a board as diverse as the current makeup of the HSD board. He said he will work to the best of his ability to implement the vision of the board of education.

“Their role in looking forward 36 months and then saying ‘Diego, make this happen,’ and then support me, that’s what brought me here,” Ochoa said. “I’m in all the way.”