Ochoa discusses needs for next school year that will affect budget. 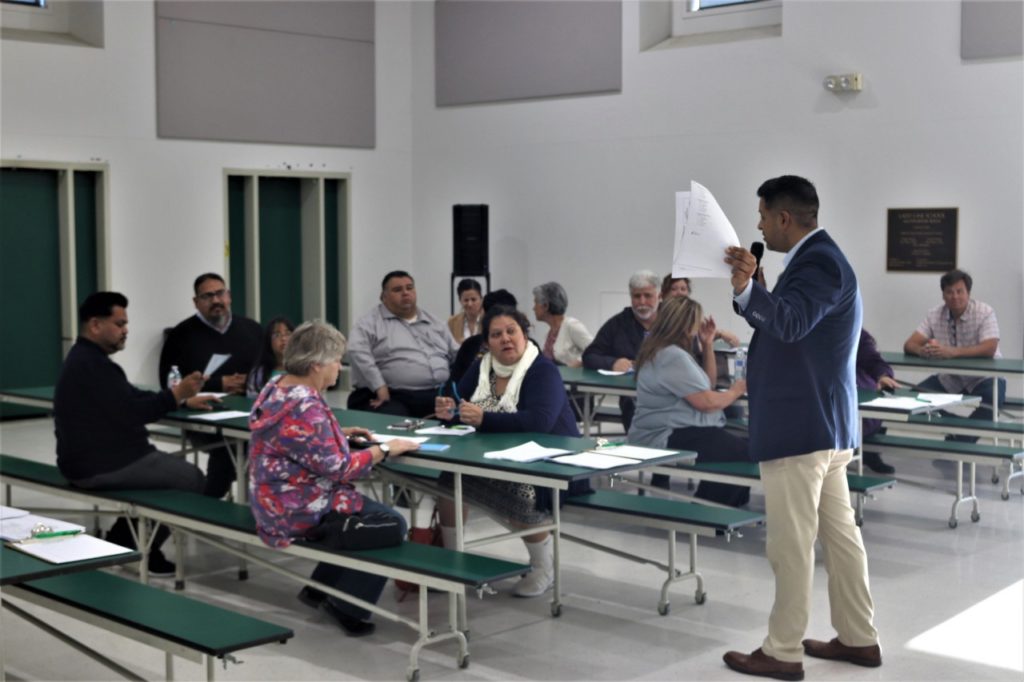 Ochoa discussed the LCAP, a statewide initiative that has been in effect for five years and is tied to the local funding formula that every school district in the state is required to follow.

“We, as the educators, will work hard to develop a strong plan to accomplish those goals,” he said. “LCAP is one of the better changes that has happened in the state over the last five years because it strengthens and deepens the connection between the school district and the parents and students we serve.”

Ochoa pointed to a table full of Chromebook computers normally used by most of the district’s 5,695 students. He told BenitoLink that meeting attendees would use them to log onto the district’s webpage to fill out the survey, which will then be used to write the report for LCAP to determine how to spend next school year’s budget.

LCAP is the starting point for determining the following year’s budget, Ochoa said. The current budget is $61 million.

“The budget is going to be developed based on the needs for the district,” he said. “Part of what will culminate tonight is a survey that we’ll also promote on our district webpage and through our email systems with our parents so we can gauge the areas of the strongest support in terms of the district’s plans for the next school year.”

There were four goals discussed at the meeting:

Regarding the first goal, recommendations presented to the attendees included hiring additional assistant principals, as well as intervention teachers and counselors.

“We currently spend in excess of $350,000 to have instructional assistance to help teachers, but it stops at first grade,” Ochoa said. “The district is allocating a pretty substantial amount of money and we as administrators, teachers and community members should ask, ‘Is this a great benefit if it stops at first grade?’”

There will be an effort to reduce Hollister School District-mandated tests, class sizes, off-campus teachers and administrator meetings, Ochoa said, as well as an effort to increase attendance.

Regarding technology and innovation, Ochoa said the goal is to have a Chromebook computer for every Hollister School District student, though some Kindergarten and first-grade teachers have said they do not want one for each student because they teach in groups. There are also plans to hire more site technology specialists, provide tech support for teachers and help more teachers become Google-certified.

For the final goal of safe and secure school environments, Ochoa said there would be an effort to improve school playgrounds, upgrade surveillance cameras, and implement a school resource officer program.

During the Spanish-language meeting at R.O. Hardin Elementary School on April 10, Ochoa held a two-hour session with attendees who voiced their concern about spending money on resources like mail programs and asking parents why their students did not show up to class.

Attendance is a big problem for the school district, Ochoa said. Out of the nearly 6,000 students enrolled in the Hollister School District, about 600 miss 19 or more days in a school year, he said.

Some parents said that school staff needed to make an effort to understand the root of the problem, which may include a difficult home environment, bullying at school, or learning disabilities.

Ochoa told the parents that the district’s goal is to receive more than 100 surveys from English-speaking parents and 100 more from Spanish-speaking parents. Suggestions that stemmed from the April 10 meeting included holding training sessions for students just like teachers do on “Early Thursdays,” when students are released between 11:05 a.m. to 12:30 p.m. depending on the school. One parent also suggested having an assembly where students are informed about topics like bullying and drugs.

Ochoa said that besides getting input from parents, the district is also getting input through the surveys from employees, teachers and administrators.

(Normally, in many districts, the opinions of directors and administrators are what counts, Ochoa said. With me, being the superintendent of the school district, all opinions count.)

The district has held 25 meetings discussing the same issues, Ochoa said, because he believes the various points of view and idea sharing will give the district a great plan for next year.

Sarahi Garcia, parent of a special education student, felt differently about the current status of the school district and San Benito County in general.

Garcia voiced her frustration to Ochoa about how she has to travel to different counties for resources for her five-year-old.

After learning that Ochoa’s background included over 20 years in special education, she sighed in relief and allowed herself to faintly smile after fighting to keep from crying.

(I was happy because he knows what it’s like to struggle. He knows what we’ve been through.)

Despite the small group of parents, Ochoa had difficulty getting them to speak with the microphone. Instead, most parents relied on school representatives to relay the conversations they had in smaller groups.

(Maybe in the second meeting that person won’t be embarrassed and won’t feel weird speaking to a bigger group, Ochoa said. I think everybody who came to the meeting understood that for me and the Hollister School District, their participation has a result, that it’s part of the process of making decisions.)