Congressman Jimmy Panetta responds to a resident’s call for a border wall. 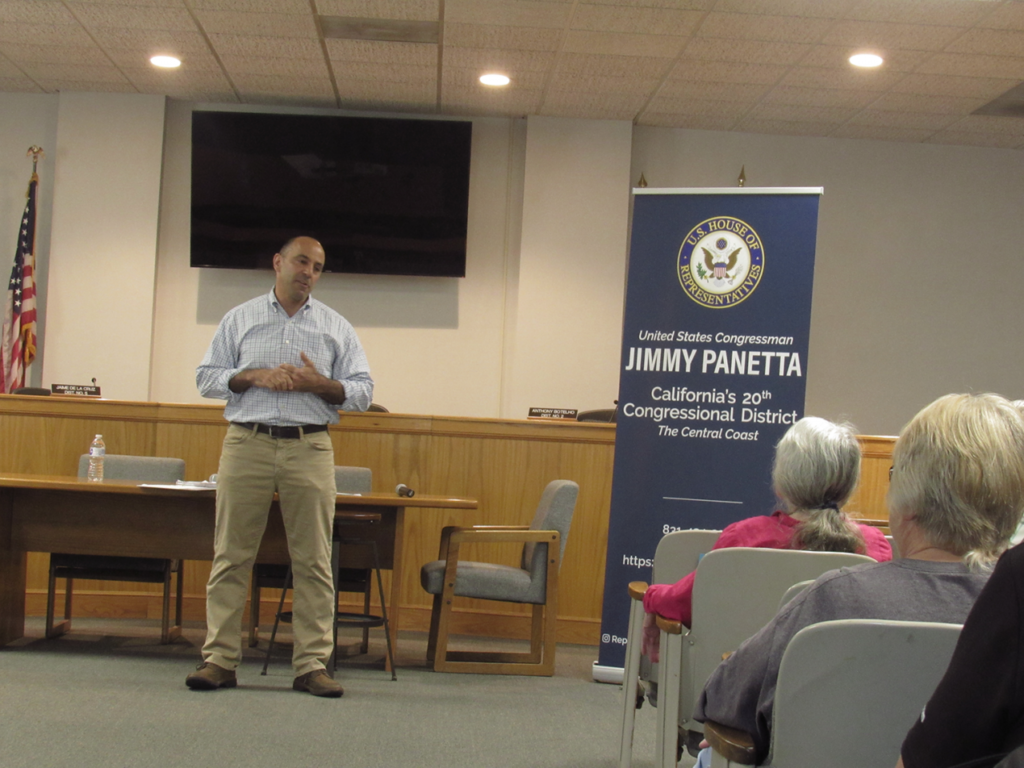 Congressman Jimmy Panetta answered several questions from the public after giving a legislative update during an April 13 town hall in Hollister. Photo by Noe Magaña.

Before speaking on immigration, resident Terry Clark said veterans should not pay a dime on health care. Photo by Noe Magaña.
×

During the April 13  gathering at the San Benito County Administrative Building on Fourth Street in Hollister, resident Terry Clark made clear his position on the border. He said despite being in favor of immigration, as he has family members from other countries, “what’s happening down there, the influx of everybody storming our borders right now needs to stop.”

Clark went on to say that because the government has not been able to get anything done for a long time, the situation is getting worse.

“So now there’s two or three more caravans coming up 100,000 people at a whack,” Clark said, adding that because immigrants get released about 20 days later they begin to collect welfare.

After receiving applause from one other resident among the roughly 20 people present, he said the American people will take matters into their own hands.

“We are going to go down to that damn border and we’re going to secure it ourselves because it’s disgusting what’s going on,” Clark said.

Panetta, who represents San Benito County and adjacent areas in the House of Representatives, responded by saying he believes decisions about having proper border security need to focus on policy and evidence rather than politics and slogans.

“It needs to be more than just a wall built all along the border,” Panetta said. “Unfortunately you have an administration that sold it as such. Unfortunately, you have an administration that’s basically portraying the people who are coming here as out of a scene of a 1980s Chuck Norris movie where you’re having people in bell bottoms and t-shirts, guys running over and wanting to do harm and commit all this crime. That’s not it.”

Panetta said it’s not the nation’s economy pulling immigration, but rather a push-out of violence erupting in Central America.

“Yes, we are seeing chaos at our border because of the situation in Central America and building a wall is not going to stop them from continuing to come here,” Panetta said.

He said the solution is to hire more asylum officers and judges to process around 800,000 asylum applicants that exist right now.

“You have people showing up to your front door who basically got the crap beat out of them or are afraid,” Panetta said. “We don’t turn people away. One, that’s not the humane thing. Two, it’s not the American thing. Three, it’s not our law.”

Before discussions turned away from immigration, Clark said the country needs to deal with immigration the right way or the U.S. will turn into a third world country.

“If you people don’t think so, wait another 20 years,” Clark said. “Look at what California has turned into. It’s pathetic.”

San Juan Bautista Councilman John Freeman quickly responded from the audience by saying that as the sixth largest economy in the world, California is doing pretty well.

Before it turned into a bigger argument, Panetta stepped in and broke the tension by talking about the history of the United States.

“We’re not just a nation of immigrants,” Panetta said. “We are a nation of risk-takers. People who understand what it means to take risks. That’s how we succeed. We are also a humane nation. We also need to come up with a plan to deal with people at our borders who are looking to us, the beacon on the hill, as a place where they can go for salvation. To get away from violence.”