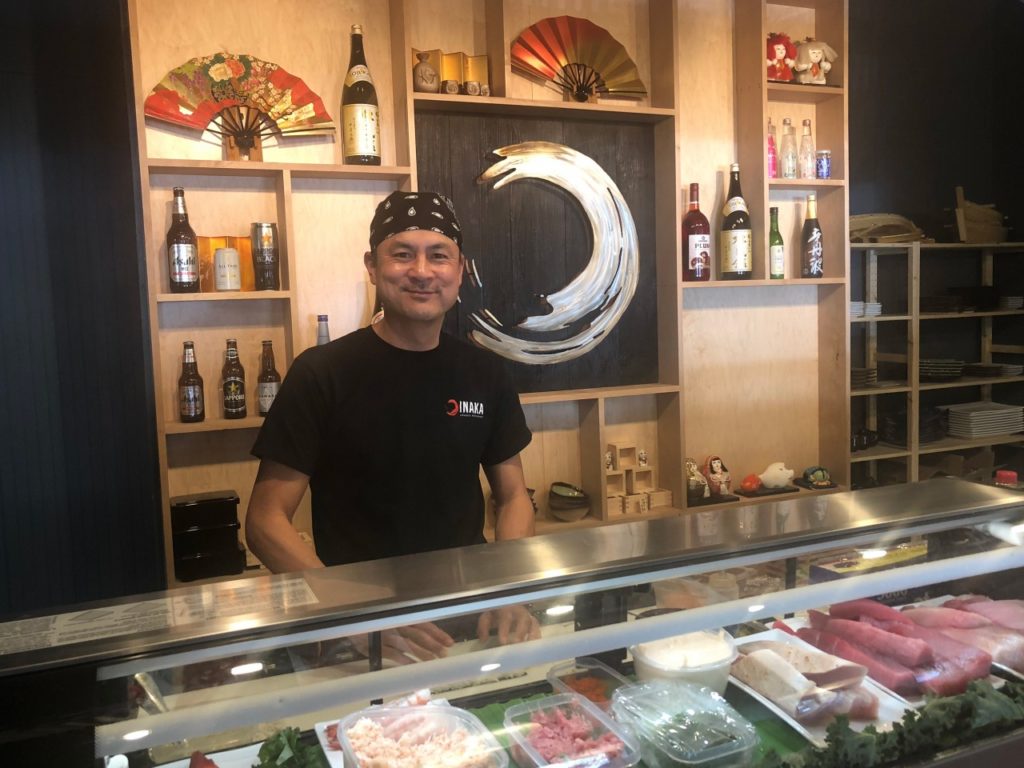 Not quite ready to retire after about 50 years in the business, sushi chef Yasuo Sakaguchi recently brought his Japanese recipes to San Juan Bautista with Inaka Japanese Restaurant.

Sakaguchi, who goes by Chief, opened Inaka on March 13 with his sons Dave, Steve and Rodney Io. This is nothing new for the three brothers as they were raised in the industry.

Dave, the youngest, said it was tough growing up because he and his siblings had little time for recreational activities because their parents were always working. So rather than having memories of competing in sports, his are inside the restaurant.

“I remember standing on a five-gallon soy sauce bucket helping wash dishes when I was my son’s age,” Dave said.

He hopes, though, that with four owners the workload will be easier on all and allow for more family time.

Even so, “it’s still a lot more work than one would expect,” Dave said.

While the initial menu included around 100 items, Inaka currently has a limited selection after Chief suffered a medical emergency three days after opening.

Zooey Io, Dave’s wife, said the family had to close the restaurant for six days following Chief’s hospitalization, during which he had heart surgery. Although he is recovering, there is no timeline for when he will return to work. Operating hours have been adjusted to 11:30 a.m. to 2 p.m. and 5 p.m. to 9 p.m. Wednesday through Saturday, with the restaurant closing at 8 p.m. on Sunday.

Two BenitoLink staffers dropped in for lunch to try several dishes. The Unagi Avocado roll (grilled eel, cucumber and avocado) was a nice blend of sweet and salty, and the salmon in the Sake Maki roll was delicious and buttery.

One hidden gem is the Tamago Maki roll, made with an omelet-style egg. Dave said that while restaurants typically buy tamago pre-made, Inaka prepares its own.

Inaka also offers Japanese beer including Sapporo and Asahi with prices from $4.50 to $8. The wine consists of three selections ($7-$8): a chardonnay, a cabernet sauvignon and a plum wine. There are also eight sake options ($8-$12). Other beverages include soda, nonalcoholic beer, and hot or iced tea. The hot tea is genmaicha—green tea made with popped brown rice.

Dave said it felt special to him to be learning his father’s recipes, which he feels connects him more to the food.

While in his 20s, Chief was trained as a sushi chef in Japan before moving to San Francisco in the 1970s. He later met his wife Janet who co-owned a restaurant in Monterey. Both have been in the industry their entire careers.

Zooey said Chief and Janet retired three years ago after selling their restaurant Miyuki in Watsonville, which they ran for over 30 years. But when the opportunity to open a restaurant in San Juan Bautista presented itself, the cooking couple came out of retirement and the entire family jumped in.

The family looked at a couple options, including the building now occupied by 18th Barrel, but that location had no kitchen. When a neighbor informed the family that the Happy Rooster restaurant was closing, the project began to take shape.

A family environment is not only important inside Inaka, but outside as well. Chief, Janet, Dave, Zooey and Steve live in town within two blocks of each other.

“They really want to have a warm and comfortable place where folks feel welcome, where they can enjoy a good meal with friends and family and community,” Zooey said. “The family is really looking forward to contributing to a vital downtown San Juan Bautista.”