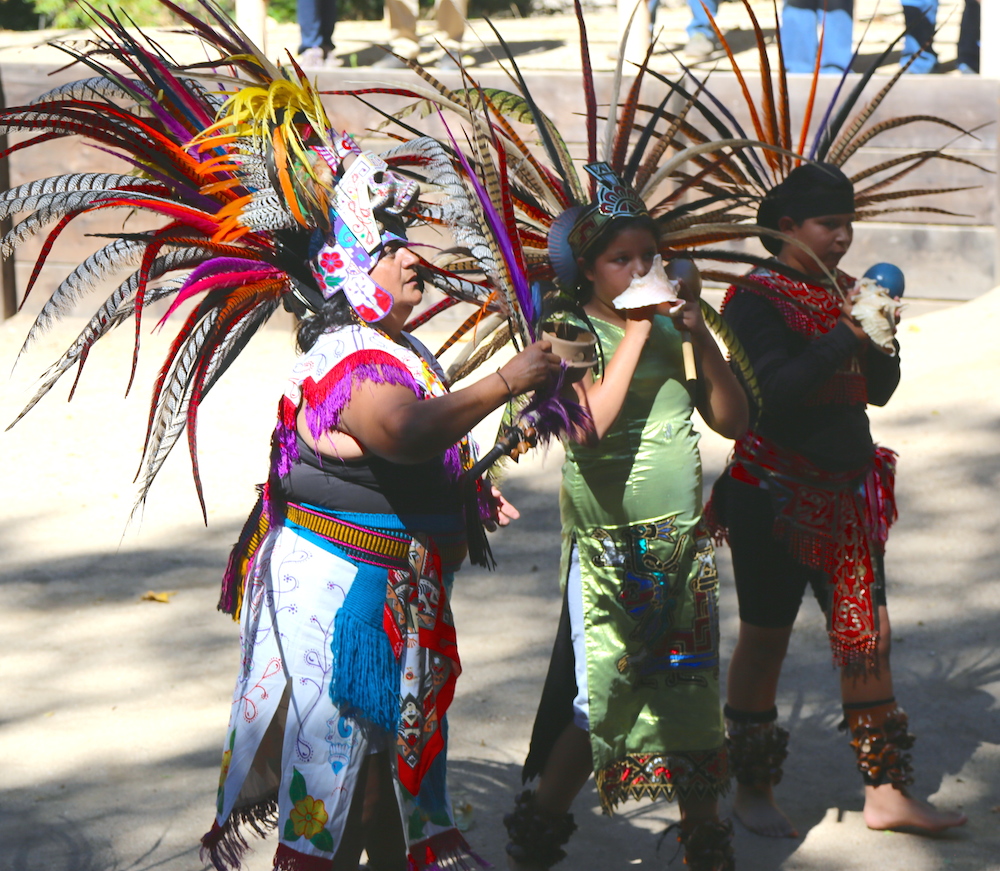 The day was already warm and dusty on the morning of Saturday, July 9, when several members of the native California Ohlone tribe embarked on a 19.8 mile prayer run through San Benito County. With each step in the rising heat, the group retraced the steps of their ancestors, who had taken a very similar route as they were escaping the Spanish colonizers from the San Juan Bautista Mission more than 200 years ago.

The run on this day served to memorialize the historical trauma of the indigenous group, and to usher in new healing for those living in the shadow of that history today. As one group member later stated in a welcoming speech, “Our runners today weren’t running away from the Mission. They were running to someplace — to here. They were running to truth.”

The run marked the beginning of the 20th annual Indian Canyon storytelling event, which has been taking place south of Hollister for the past two decades and focuses on honoring the indigenous tradition of oral storytelling. Ann-Marie Sayers, tribal chairwoman of Indian Canyon and the Costanoan Ohlone people, led much of the event. It is her work and dedication to her heritage that allows the yearly event to happen; Sayers made the decision to open up her great-grandfather’s land trust allotment to indigenous peoples in need of land for traditional ceremonies. Sayers used the Indian Allotment Act of 1887, otherwise known as the Dawes Act, to reclaim native land that had been in her family for more than 3,000 years.

Indian Canyon–a wooded area nestled in the Gabilan Range, 15 miles south of Hollister–is the only federally recognized “Indian country” between Sonoma and Santa Barbara, a stretch of more than 350 miles. Sayers opens up this area to indigenous peoples from all across the nation, hoping to help the continuation of native traditions and inspire connection to the land.

Sayers’ daughter, Kanyon Sayers-Roods, has been helping organize the storytelling event for most of her life. Grandfathered into the program, she has been involved on a more professional level in the development and ideation of each year’s specific ceremony theme for the past five years. BenitoLink spoke to her about her take on the festival’s importance, about which she said: “We make it a point to reach out to our community, to bring in various voices and knowledge. We like to incorporate many different voices in the keeping alive the age-old tradition of oral storytelling.”

“[One of the] main goals [of the ceremony] is to raise awareness about indigenous people’s voices, and how we as a community are active in striving to honor truth and history,” explained Sayers-Roods, standing outside of a booth of her personal artworks that she set up for the event. “This is the message my grandmother and mother have always shared: ‘honor the past to shape the future.' By doing this, we raise awareness of other perspectives outside of the dominant ‘colonial settler mentality,’ as I call it. Being raised as an indigenous youth has awakened me to all the things that people are not aware of when it comes to the absent-mindedness of sacredness, and when it comes to reminding ourselves that we are related to the Earth. If we take care of our communities, our land, and our environment, we create space for us to be better and stronger community members.”

Sayers-Roods said the efforts at Indian Canyon have a distinct, local educational importance.

“When I was 5 years old, I had the experience of telling a young boy that I was Native American, and he yelled back at me, 'If you’re Indian, you’re dead!' Now, when you visit the Mission, is there any reference to the Native American peoples in its history? How many native peoples were brought there? What types of native peoples? When we think about who discovered America, everyone can answer ‘Columbus.' But who did he first encounter? What was the name of those peoples, or their original names? We know that in 1492 Columbus sailed from Spain, but we don’t know who he talked to when he got here. That’s the type of mentality that we’re working to change.”

This is a sentiment that is shared amongst many community members and activists who were present for the ceremony. The general ambition was one of working to spread awareness of the native people’s history that so often gets erased from the American educational system.

Anthony Sul, one of the handful of community members who participated in the prayer run, spoke to BenitoLink about his own connection to the work yet to be done in the native community.

“Me and my cousin had the idea of bringing this together," he said. "The first run took place last year. We had traveled to different areas like Pine Ridge, Salt River and Oak Flats in Arizona, all of which are sacred sites. We were participating in different spiritual runs on the way, and we felt that there was an importance to bringing these back. It’s a healing process; we’re finding ways to heal, starting with our ancestors. We’re literally following in the footsteps of our ancestors who ran away from the Mission to this stronghold. That’s what we’re carrying on, to let our ancestors know that we’re carrying on, and that we haven’t forgotten them. We’re running for the ancestors, and the land.”

Sul, like many of the other native peoples in attendance on this day, said he is deeply involved in activism work that stretches across indigenous communities, recognizing and working to correct social ills that befall tribes in many different states and areas of the U.S. Sul described some of the other spiritual events that were happening in support of the Indian Canyon ceremony: “Today, there’s two other prayer runs that are happening simultaneously with our run here, in support of what we’re doing today. There’s one going on in Oak Flat [Arizona], a sacred site that the Apache people of San Carlos are protecting and occupying. The people in Oak Flat are running to Mt. Graham [Arizona], another sacred site. The other run is happening in Salt River [near Scottsdale, Arizona]. Community members from Salt River were going to come out here and run with us, but they couldn’t make it, so they’re doing their own run there in solidarity. People are always praying for us on Mauna Kea in Hawaii, too. It’s all about connecting these struggles, that’s why it’s important to do these runs – it’s not just about us and what’s going on here, but about putting those prayers down, getting the bigger picture, and connecting all those struggles.”

Throughout the four-hour ceremony, which took place from 1-5 p.m., the audience was reiteratively reminded of the sacredness of Indian Canyon. The intended message was strong: access to sacred lands is vital for native peoples of all creeds. The day’s program featured a number of people and groups offering various types of performances for those gathered to watch. A musician named Marin Herrera opened up the ceremony, singing in a native language and playing songs on a wooden flute and an acoustic guitar. A storyteller named Calvin Hedrick, a member of the indigenous Maidu people of Northern California, offered tales both ancestral and modern in which members of the audience were given active roles. Those sitting in folding chairs or on blankets gathered around the stage – adults and children alike –were called upon to play the parts of the hawk, the river, a salmon, a salamander, bear, deer.

Several honored guests had traveled from far away to participate in the ceremony   –an activist originally from Hawaii, now living in the Bay Area, performed a moving hula dance in a show of kinship for the native residents of the area near Hollister. The hula dancer spoke of her experiences growing up in the Pacific Islands, and the parallels between the native peoples of Hawaii and the continental U.S. During her dance, a large seashell filled with the pink salt of Hawaii was passed through the audience – each person who was handed the shell was guided to take a pinch of the salt and sprinkle it on the soil of the ceremony grounds in order to symbolically bless the space with the prayers of Hawaii.

After her dance, three other native matriarchs from protected lands near the Santa Clara Pueblo in Rio Arriba, New Mexico, invited members of the audience to participate in a “visiting ceremony.” Beata Tosie-Pena, Vicki Downey, and Mariann Nananys – representing the Tewa people, who live near the Pueblo – performed the visiting ritual to thank Sayers and the Ohlone people for their hospitality. They invited all guests who did not personally identify as native peoples of California to join them in leaving the ceremony area. The collective group then walked slowly back toward the stage, led by the three women. Smudging sage, they greeted Sayers again at the ceremony grounds and asked her permission for their official entrance, which Sayers granted with open arms.

For the final part of the ceremony, a dance group representing the indigenous peoples of lower California and Mexico performed a vibrant dance of friendship in the main arbor of the ceremony grounds. The dancers, dressed in tall headdresses and costumes festooned with feathers and sequins, moved in a synchronized circle around a central altar containing ritualistic items and a small fire. One dancer, beating a drum in the center of this circle near the altar, kept time for the rest of the troupe.

Nearing the end of the ritual, the troupe members invited attendees to participate in a dance representing the newfound kinship between all those who bore witness to the day’s events. Led by the dancer who had previously been keeping a drumbeat, the audience members linked hands and snaked their way in a long line around the arbor’s dirt floor. The chain of connected arms whirled through the dance floor to the rhythm of the drum until, all at once, the string of people looped into an unbroken circle and rushed toward the center altar with a loud cry. With that, the friendship dance was completed, and participants slowly filtered back out of the ring of the wooden arbor and into the treed area above. A meal was served, and the remainder of the afternoon was left unscheduled for attendees to wander through the event site and interact with Indian Canyon participants, visit booths, and enjoy the sunshine.

In addition to the yearly storytelling celebration, Indian Canyon plays host to many indigenous ceremonies and events. While it is not a public park, the Canyon can be visited by appointment, and continues to play an important role in the education and preservation of native culture in San Benito County.