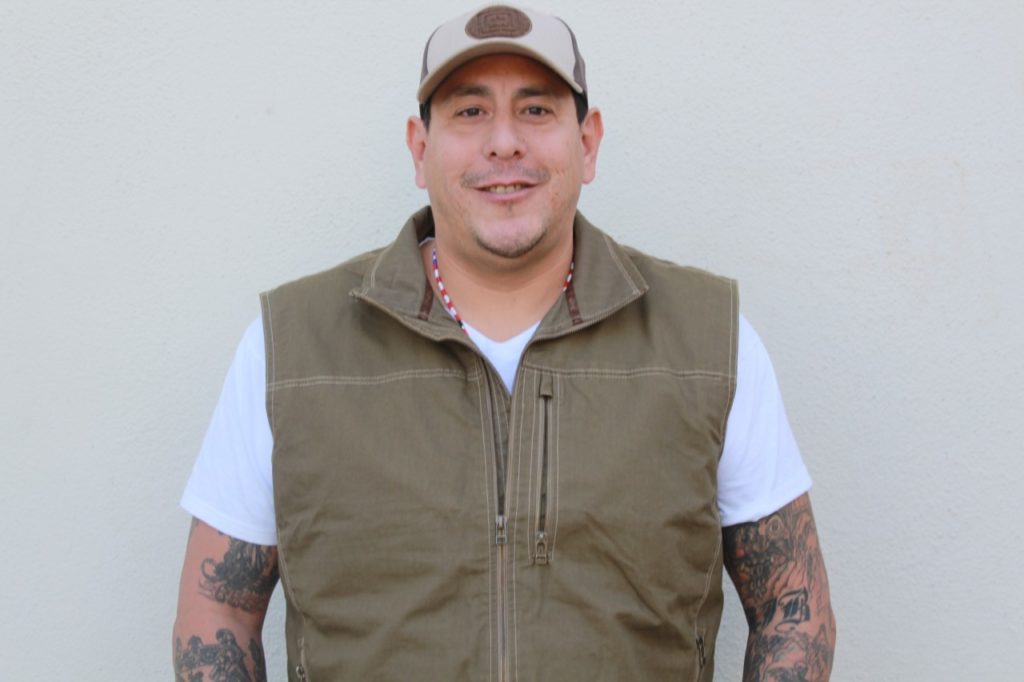 This article was written by San Benito High School student reporter Rosa Cortez and is part of the Veterans Voices Project.

From a young age Felipe Galvan of San Juan Bautista knew that someday he would be serving his country. Growing up in a family with a military history, he was always curious about it. He would ask his uncles to tell him stories about their military experiences, and they only had good anecdotes to tell, so it was expected that one day he would want to join the military as well.

“Being in the Marines is hands down one of my greatest accomplishments” stated Galvan in his interview with students from San Benito High School’s Mexican-American history class.

His biggest regret though, is that he did not finish college.

He attended Gavilan College and Cabrillo College, but never graduated and instead went into an electrical trade. This definitely made him stand out from his immediately family because he was the only one not to finish college.

Like anyone else, he loves his family and would do anything for them, but Galvan confessed that the person who he admires the most is his father, Felipe Sr.

“I am the man I am today because of him. I look up to him,” said Galvan, adding, “I was the baby and the only boy, so I got to do whatever I wanted to.”

Lacking discipline and wanting a challenge, he decided to join the United States Marine Corps. He believed that if he was enlisting he might as well go for the most disciplined branch of military. The boot camp for the Marines was a long and hard three months, but with the help of the rest of his buddies, Galvan was able to get through it explaining, “Anyone that is a Marine is automatically my brother or sister and it’s a bond that can’t be broken”.

Galvan wishes he would have enlisted as soon as he graduated from high school, but at that time he was more interested in making money and having fun.

At age 25, he joined the Marines in August 1998, after being laid off from his job as an electrician.

”I would love to have done my 20 years, if I wasn’t injured. I absolutely love the Marine Corps,” he said.

Unfortunately Galvan couldn’t continue in the war or the military because he was injured from normal wear and tear caused by the heavy gear they have to carry but also from combat.

“I was hit by three IEDs [improvised explosive devices], one directly and two indirectly,” reminisces Galvan.

When the U.S. invaded Iraq, Galvan’s serving time was about to end, but because all of his buddies were going to the war he decided to reenlist.

“I was anxious and ready for it,” said Galvan.

When he got to Iraq, he was stationed in Falluja, but got to travel to all the military bases in Iraq.

Galvan was forced to leave the Marines and return home, because of his injury.

“When I came home, it was a difficult transition. I had nightmares and I still have nightmares of combat even after 11 years”, he said.

The tough military training that soldiers receive–referred to as military bearing–conditions soldiers to always look and act as if they are okay and because of this it is difficult for them to express emotions.

There are lessons Galvan learned in the military that have helped him in his civilian life such as the responsibility “To better yourself, the people around you, and your community,” which is why  Galvan now volunteers at the Veterans of Foreign Wars (VFW) post 6359 in San Juan Bautista, celebrating his fellow veterans and helping with their needs.

Students enrolled in San Benito High School's Mexican-American history partnered with the San Benito Arts Council's on-going Veterans Voices Project last year to produce a book about local, Latino veterans. During the Fall and Spring semesters, students will honor the voices of our local, Latino veterans. In addition to the arts council, other project partners include: Community Media Access Partnership (CMAP); Voices of Witness; and BenitoLink. A community-wide event scheduled for May 2018 will showcase Latino Veterans Voices of SBC Project and provide the public the opportunity to meet the students and the vets who participated in the project.