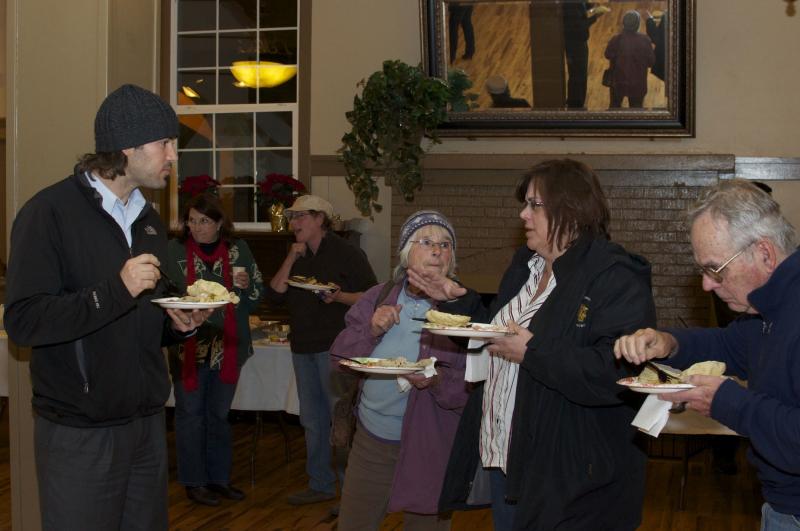 Isha Foundation Volunteers presented an evening community gathering to introduce themselves to the San Juan community, to hear concerns residents and neighbors may have and to share a meal of Indian food. The evening was atttended by over 60 interested residents of the general area, including Hollister and San Juan Canyon. Fifteen Isha volunteers assisted in preparation of the food, set up of the event and presentation of the program.

The Isha Foundation owns 62 acres on The Alameda and Salinas Road  The volunteers presented their tentative plan for the property, which is currently under the Williamson Act. They have planted 1000 olive trees on 12 acres and a hundred fruit trees and are planning to plant hundreds of native trees and plants as well. They plan to harvest the olives for oil and create natural settings for paths for those who come to use the site as a refuge from their lives in the the city.

The Foundation has applied for Compatible Use of 5 acres of the property to allow them to build a yoga center on the site. The preliminary drawings of the building are for a 150' by 150' building. The location and specifics of the building have yet to be determined. At this time they are only applying to the County for Compatible Use of the 5 acres. Some of the examples of approved Compatible Uses in San Benito County in the past 10 years are; oil and gas wellss, cellular towers, small home businesses, residential unit for caretaker, or manager and use of existing buildings for weddings and parties, a meat processing facility. The application process of applying for building permits and impact of traffic and parking will come when there are actual plans for a project.

The Isha Foundation volunteers are using the site as a permaculture demonstration, using swales to capture rainwater running down the mountain and mulching and capturing water so that it will replenish the water table. They told the assembled guests of their plans to plant Native American Three Sisters Guild-style gardens which plant corn, beans and squash seeds in the same hole so that the plants can work together. The corn gows tall and gives the beans a structure to climb, the beans add nitrogen and the squash provides ground cover.

Vani Bahl, an architect who is an Isha volunteer, noted that the plans were all preliminary and that no decisions have been made about the structure they hope to build. They wanted to inform the community of their plans and to get input about the concerns people may have.

Diana Carr, a neighbor on the north side of the property, asked questions about the fences and the effect they are having on moving mountain lions into her area of town. Some attendees were concerned about the prospect of a building on the ridgeline. There were questions about accomodations for the people expected to attend classes at the center. The volunteeers explained that there would be two, or three occasions a year when as many as 225 might be on the site. They are planning to accomodate all parking on the site and maximizing the use of carpools and utilizing local hotels and the St. Francis Retreat to accomodate out of town visitors.

Richard Pitschka, a resident of San Juan Canyon who had attended a previous informational lunch with the Isha volunteers, reported that he had been concerned about what kind of neighbors the Foundation would be, so he contacted city officials in McMinnville,Tennessee, the site of their East Coast Center and was told that they were very good neighbors. He encouraged others to go to the city's website and contact them.

Karen Holcomb, a neighbor across Salinas Road on the Holcomb-Pilario Ranch, noted that, on the day of the tree planting on Mother's Day there was little impact on them, despite the 200 volunteers on the site.

The next step in the process will be a Board of Supervisors meeting on Dec 17, at 1:30pm, at which the San Benito County Agricultural Preserve Advisory Committee's finding for Compatible Use will be considered by the County Board. If the Board of Supervisors agrees with the Committee, the Foundation will proceed with it's planting, if it is not approved, the Foundation has the option of cancelling the WIlliamson Act effects by going through another process which includes paying 12% of the value of the property. San Benito County has not yet cancelled a property from the Williamson Act.

The public is encouraged to go to the meeting and express their concerns/support.

Previous articles about the Isha Foundation: