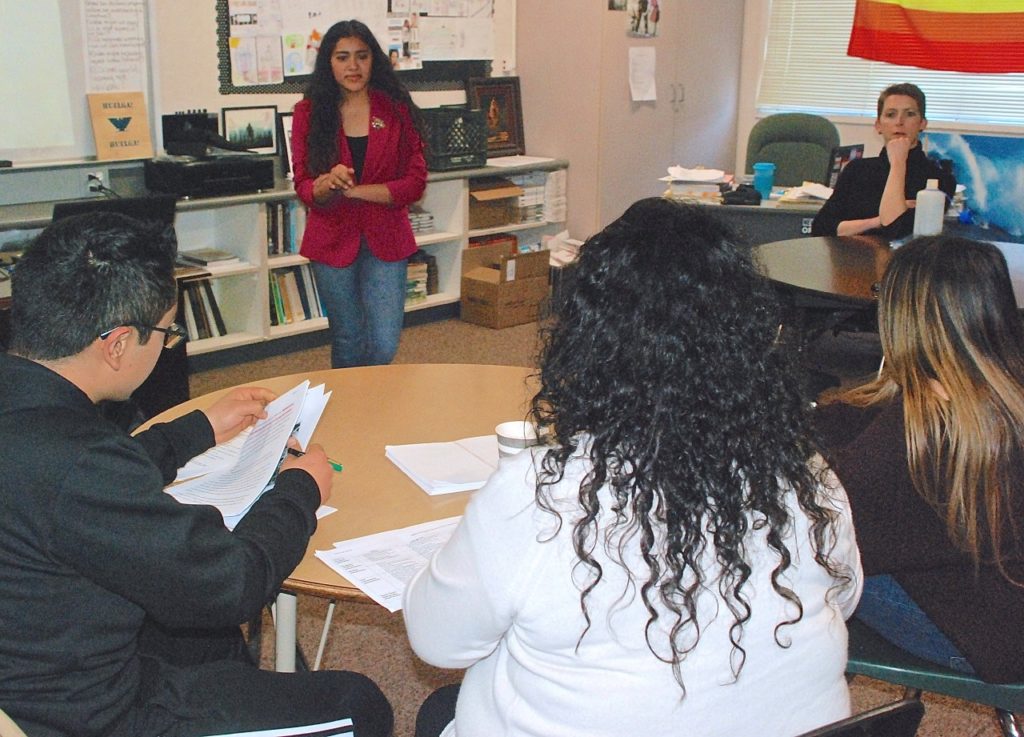 Emily Andoney,17, of Hollister, presents a graduation-exhibition to judges last week at Anzar High School in San Juan Bautista. Her subject focused on the lack of female representation in U.S. government.
×

Juniors and seniors at Anzar High School in San Juan Bautista are presenting their best research work to judges this spring, at required graduation exhibitions.

There are two more rounds of exhibitions coming up before the end of the school year. A total of five rounds are held each year, and judges are always needed.

Last week Emily Andoney, 17, of Hollister, presented her first of three presentations, also known as grad-exes. Her topic was, “Despite Having Feminism for Many Years Now, Why Don’t We Still Not Have an Equitable Representation of Women in Leadership in the United States?”

A panel of three judges, Leticia Preciado, Daisy Lopez and Manuel Rodriguez, heard her presentation, which consisted of a paper, an oral presentation, a powerpoint presentation and a summary.

They gave Andoney a score of 3, which is a top score. The other scores are non-passing, a 2, which is minimal passing and a 2+. The only higher score is a three with distinction.

Scores don’t affect a student’s grade in their class or their final grade point average. But they are included on their transcript and student profile.

“I think she (Andoney) did an excellent job,” Preciado said. “I think her main point was very inclusive. I think she covered all the criteria and … she gave it some color. She got it.”

The other two judges agreed.

“I think she was really passionate about it,” Rodriguez said.

A senior, Andoney, began working on her project during her junior year. It was her history and language grad-ex requirement. She has two more to present before graduating this year. Her coach was her teacher Darby Begeman.

The other projects will fulfill presentations for science and math and for art and Spanish or a second language. She plans on attending Cabrillo College after high school and wants to pursue a nursing career.

Grad-ex requirements are based on a curriculum at Central Park East High School in New York, McKowen said. They began at Anzar High in 1996, two years after the 355-student, college prep high school opened.

Anzar High is part of the Aromas San Juan Unified School District. As plans were being made to open the school in 1994, McKowen said, the board of trustees toured similar schools around the United States.

Because Anzar started with just 9th-grade students, McKowen said, the board knew they wanted something that students could do in their junior and senior years. The freshman and sophomore years center on laying a groundwork for grad-ex presentations.

The school’s first graduating class in 1997 was the first to do exhibitions.

There are four content areas associated with the grad-ex program. They are language arts, history, science and post-graduate service learning. There are three components to each content area: math, art and a second language. Students can choose how they want to combine them.

Some of the other issue-based presentations done by students last week were titled:

“Does the Dowry System in India Need Reform?”

“Are Genetically Modified Crops the Solution to World Hunger?”

“What Are the Outcomes of Physical and Verbal Abuse to a Child and How Does it Affect Them in the Long Run?”

“How Can Listening to Different Types of Music Affect Someone’s Mental Well-Being?”

“Is the USA Slowly Becoming an Orwellian Society?”

“Every single student ends up confident in public speaking and being able to be articulate,” McKowen said.

She sometimes has to pinch hit for a judge who can’t make a presentation, as she did last week. One of the judges was the mother of a student who was in Anzar High’s first graduating class.

“It’s her way of feeling connected with the awesome aspect of youth,” McKowen said.

Retired educators also enjoy judging presentations, she said. “They just love it. They miss the interactions with teenagers.”

To become a judge, McKowen said, you only have to be a high school graduate. But if a senior student has finished his or her exhibitions by the end of the first semester, they can train to be a judge.

After completing the training session, judges receive a judging handbook and a package from McKowen. It includes her cell phone number, in case a judge can’t make a presentation.

From feedback Anzar High has received from graduates, McKowen said, the grad-ex program is working. Most students go on to a community college and then graduate from a four-year college.

“They are fully equipped to approach any college project or paper or assignment,” McKowen said.