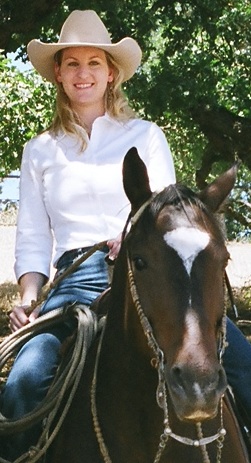 The SBC CattleWomen held their summer barbecue at the picturesque home of Tony and Cathy Alameda in the Cienega area on Aug. 8. Around fifty member, friends and family attended the event which was held amid the lovely setting of oaks, views of hills and a wonderful cooling breeze. As part of the CattleWomen’s general meeting the announcement was made that Jessica French Brem was selected as the 2014 San Benito County CattleWoman of the Year.

Jessica, daughter of proud parents Mitt and Janet French, was born and raised on her family’s historic cattle ranch, which was established in 1871. The ranch is situated in San Benito, Santa Clara and Merced counties where she and her brother, Elliott, are fifth-generation cattle ranchers. She started her own cattle herd at the age of 15 and she and her husband Eric still maintain that today.

Jessica is a graduate of Cal Poly, San Luis Obispo, where she majored in agricultural science and minored in agricultural business. Her time spent at Cal Poly included being part of the Swanton Pacific Ranch Cattle project. She also worked at the swine unit for two years. It was the only time in her life she diverted from cattle, until her family opened their hunting business at their ranch that includes wild boar hunts. Upon graduation, she returned to San Benito County and was the president/CEO of the San Benito County Chamber of Commerce for five years. She said she loved working for the Chamber and promoting the county and its diverse agricultural base. Along with this position, one of her favorite duties was the management of the Saddle Horse Show and Rodeo Parade in downtown Hollister each June.

Today she works full time in the hunting and cattle operations of her family’s ranch the French Ranch, the neighboring San Benito Cattle Company (which includes the old Rancho Quien Sabe and Rancho Real de las Aguilas Land Grant Ranches) and the Last Oak Ranch Group. When Jessica is not in the office, her favorite things to do are riding and roping. She also enjoys planning and cooking the meals at the 20-plus brandings held every year.

Jessica married her best friend, Eric Brem, in July 2012 and the couple is a week away from the anticipated arrival of their first child—a baby girl.

The San Benito County CattleWomen said they are proud to choose Jessica French Brem as 2014 CattleWoman of the Year with all her excellent leadership talents that have helped make our county  a better place to live and work.