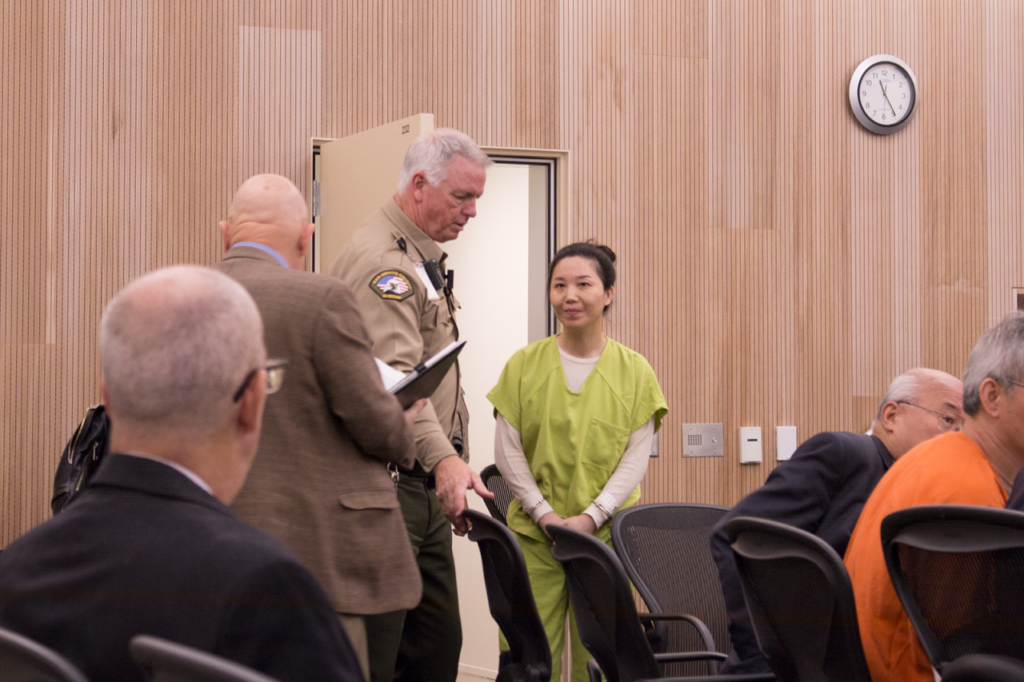 Jung Choi greets her translator before taking a seat during a May 1 hearing at San Benito County Superior Court. Photo by Noe Magaña. The mental competency report for Hollister resident Sang Ji, accused of murdering his wife Yoon “Clara” Ji in 2017, was delayed at a May 1 hearing. South Korean national Jung Choi, who is also accused in the murder, had her hearing for charges delayed as well. Ji will return to court on May 24, while Choi will return on June 28.

Ji and Choi appeared in court together, though they are now being tried separately.

Gregory Laforge, Ji’s attorney, told Judge Steven Sanders that he had received the doctor’s report that morning and needed at least two weeks to review it. Ji’s mental competency evaluation was conducted on April 18.

On March 29, LaForge requested a 1368 motion for an inquiry into the defendant’s mental competency before trial. He told BenitoLink at the time that he didn’t feel Ji was competent to stand trial.

Sanders set a new hearing for the results of Ji’s evaluation for May 24.

Sanders also set a May 17 deadline for Choi’s attorney, Harris Damkar, to file a 995 motion request for the trial judge to dismiss all or part of the criminal case. The deadline for San Benito County District Attorney Candice Hooper to submit a response is June 3.

At the May 1 hearing, Damkar said that if the 995 motion is declined, he plans on setting other motions.

Ji and Choi were arrested in December 2017 in connection with the disappearance of Yoon Ji, which was reported by one of Ji’s daughters. Ji led investigators to Yoon Ji’s body buried in a shallow grave later that month.

Ji and Choi to be tried for murde