Prosecution expected to present its evidence against the accused. 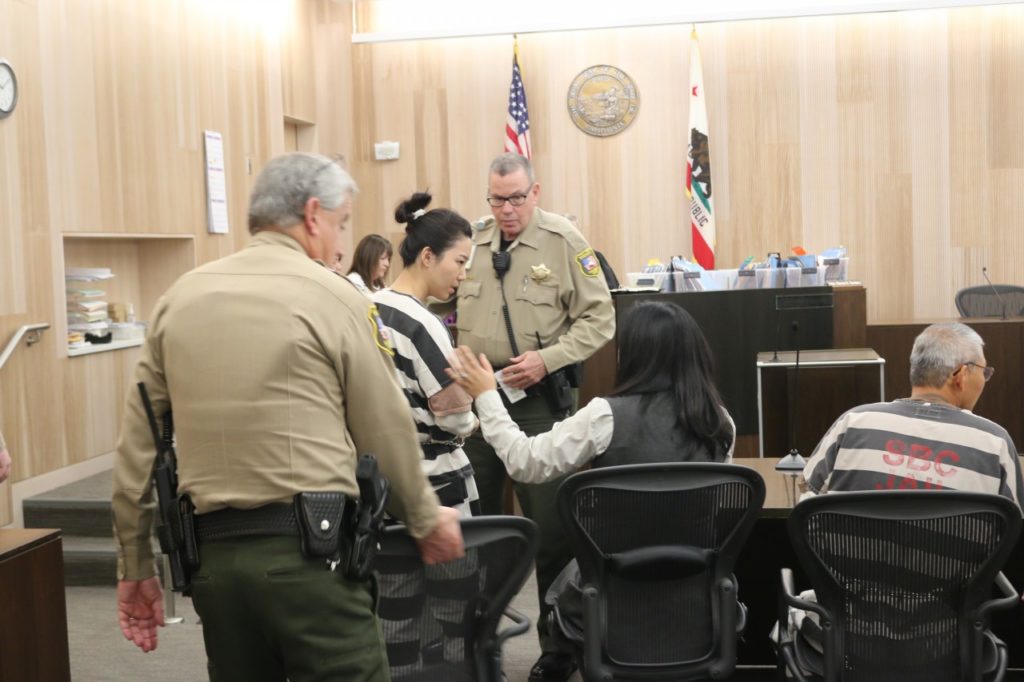 Jung Choi (left) and Sang Ji (right) have appeared in court together for over a year. A Korean interpreter sits between them at a 2018 hearing. Photo by John Chadwell. Preliminary hearings have been set for Jan. 22 and 23 to determine if there is enough evidence to proceed to trial in the Sang Ji and Jung Choi case, according to public defender Gregory LaForge. LaForge represents Ji, while Harry Damkar acts as public defender for Choi. The case is expected to go before a San Benito County Superior Court judge in the coming months.

It has been over a year since Hollister resident Sang Ji and South Korean national Jung Choi were arrested and charged with murdering Ji’s wife, Joon Ji (aka Clara).

LaForge said that the prosecution will be presenting evidence for its case against the accused.

“We still have not gotten [DNA evidence] from law enforcement, but we’re to the stage where it’s not enough to hold back the preliminary hearing,” he said. “The police officers will get up and testify and it’s the DA’s job to prove a crime was committed and these individuals did it beyond a preponderance of the evidence.”

If the judge feels there is enough evidence, Choi and Ji will be held for trial, LaForge said.

“We’ll come back in approximately three weeks to get a copy of the transcript and go over it,” he said. “As a defense attorney, you look to see if there are any types of motions or anything you can file to protect yourself if something went wrong at the preliminary hearing.”

He explained the transcript can be used to look in-depth at what all participants, including the lawyers and the judge, said during the hearing. “It’s called a 995 motion,” he said. “Once we get the transcript it will be set for trial.”

He said he did not know who the district attorney would call as witnesses.

La Forge said there has been a delay in receiving the DNA report for the case because local law enforcement was slow in getting the samples to the Department of Justice.

“It would have been nice to have it ahead of time,” LaForge said, adding he has enough to go forward with the hearing. “It won’t be enough for the trial, but it is for the hearing.”

LaForge said there may be issues with Ji’s case, one being that he was found liable during a civil hearing and ordered to pay his two daughters $20 million each. During that hearing, San Benito County Sheriff Captain Eric Taylor testified that Ji had implicated himself and Choi in the murder, though Ji said Choi actually struck the fatal blows as he watched.

La Forge also pointed out that Ji was not informed about the civil hearing or given the opportunity to be present.

Ji “was five minutes away and didn’t get any notice of the trial and he wasn’t brought over from the jail,” LaForge said. He agreed this could be helpful to Ji and detrimental to the DA’s case. “I don’t know what happened. Judge Tobias, who is retiring today, might have to come back as a witness.”