Criminal proceedings against Ji suspended while expert determines if he is mentally competent to stand trial. 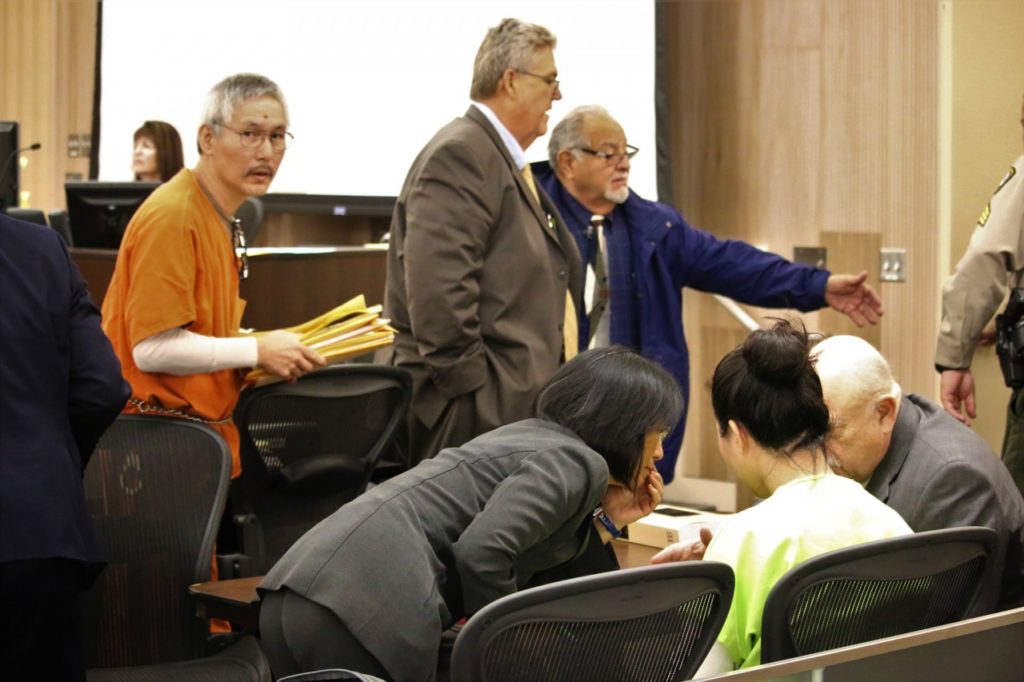 Sang Ji walks into the courtroom during a March hearing as Jung Choi confers with defense attorney Harry Damkar through her Korean interpreter. Photos by John Chadwell. Hollister resident Sang Ji and South Korean national Jung Choi, who stand accused of murdering Ji’s wife Yoon (Clara) Ji in December 2017, will go to trial separately. The pair previously appeared together in court as the case moved through a series of hearings that began in February 2018.

Ji and Choi appeared separately in San Benito County Superior Court on March 29 before visiting Judge Gilbert T. Brown. Through her attorney Harry Damkar, Choi pleaded not guilty. Brown, Damkar and San Benito County District Attorney Candice Hooper agreed that Choi would appear again on May 1 for a setting of motions hearing to determine what charges she would be tried for, what evidence would be kept out of the trial, and if certain persons would not be allowed to testify.

Ji appeared before the judge after Choi was escorted out of the courtroom. Ji’s defense attorney Gregory LaForge asked Brown to approve a 1368 motion, which is a request for an inquiry into the mental competency of the defendant before trial. Brown granted the request and then suspended criminal proceedings against Ji. He ordered an expert evaluation to determine if Ji is mentally competent to stand trial.

“At this stage of the proceeding I don’t feel he’s competent to stand trial,” LaForge told BenitoLink after the March 29 hearing. “That’s going to be the doctor’s determination. We’ll get the doctor appointed on April 3.”

Even if Ji were determined to be mentally incompetent, he could still be considered competent enough to stand trial if his ability to understand court proceedings or assist in his defense is not impaired. “While judges ultimately determine a defendant’s competence to stand trial, psychiatrist’s opinions are adopted in 90 percent of cases,” according to Clinical Psychiatry News.

Ji and Choi were arrested on suspicion of Yoon Ji’s murder in December 2017, after a missing persons report was filed by one of Ji’s daughters, who told the San Benito County Sheriff’s Office that she did not believe her father’s explanation about what happened to her mother. Ultimately, Ji not only confessed, but led authorities to where Yoon Ji’s body was buried in a shallow grave.

Hollister murder suspects back in court, set to return in March