Congressman Jimmy Panetta covered all the hot political buttons at the Aromas meeting, from immigration reform to rising sea levels. 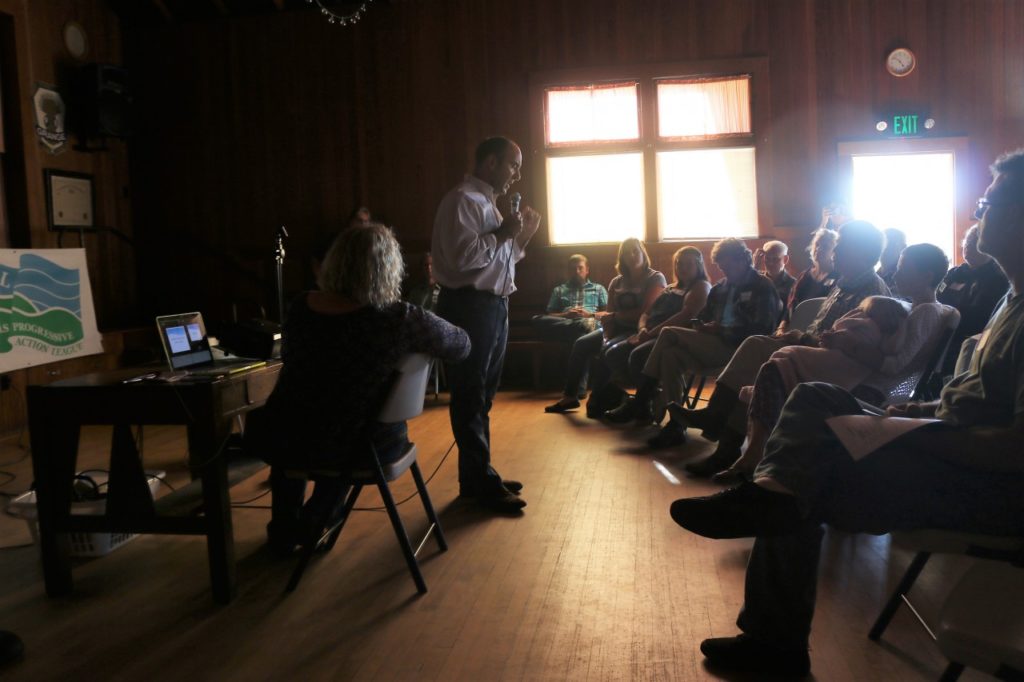 He began his speech with a topic close to the heart of those in the room by telling them that the night before he was at the 25th anniversary for the creation of the Monterey Bay National Marine Sanctuary. Then he seamlessly segued into a cautionary tale, telling the audience how in the eight months that he has been in Congress he has learned to be wary of those intent on undoing Democrat accomplishments and dealing with President Trump.

“The last eight months have been absolutely overwhelming, a whirlwind of information, activity, executive orders, of tweets” he said. “After I was sworn in on January 3, from that day on, we were voting. I think I’ve actually pressed that button for votes easily over 500 times on legislation that the Republican majority has been putting forward. They’ve been waiting for this opportunity. They’ve put forth a lot of legislation that, unfortunately, rolled back a lot of protections that were put in place during the last administration.”

In comparing his week of orientation to Congress, Panetta referred to President Trump’s inauguration as the “week of disorientation” and how Congress has constantly had to shift gears to try to keep up with him. He told of how Congress came in on a Monday ready to deal with the budget when DACA became the issue of the day, and then Trump was meeting privately with Nancy Pelosi and Chuck Schumer.

“He’s pivoted to working with Democrats after being in a bubble for the first seven months of solely wanting to work with Republicans in trying to put forward the promises he made during the campaign,” he said. “Next thing he knows, you do have to negotiate with Democrats.”

Panetta said this was a good sign and then used a Russian proverb taught to Ronald Reagan, “Trust, but verify,” adding that this will be the biggest issue when dealing with Trump, especially regarding immigration, DACA, and anything to do with the environment. “We can trust, but we have to continue to verify, considering how he can be all over the place,” Panetta said, emphasizing the president’s surprise announcement on DACA. “What we’re looking at is there was a deal to have a deal on DACA. I believe his heart is there, but I can’t say his head is there in how he balances out his heart’s feelings with his campaign rhetoric. This is the guy who when he made his announcement for president, maligned Mexicans by calling them rapists, and throughout his campaign talked the rhetoric of building a wall. This is the guy who made the major decision of removing DACA. How do we trust somebody like that?”

He said there will be no comprehensive immigration reform until the Republican majority is ready to do so, and it is unlikely to happen because most Republican districts have less than a majority of immigrants. He said as the grandson of immigrants and living in the Central Coast, he understands the importance of immigrants. He said some states have no dreamers, while the Central Coast, alone, has more than 20,000. He said dreamers represent what the country represents and that the president needs to negotiate with Congress to give the 800,000 dreamers in the country the opportunity to continue to contribute to the country.

He said comprehensive immigration reform will need to combine various immigration programs that will lead to citizenship and security, but it will not be a one-for-one, DACA for a 2,200-mile wall. He emphasized, though, that if border security means increasing technology and aerial patrols, that’s something Democrats can support.

When he brought up healthcare, Panetta said undoubtedly the Affordable Care Act (ACA), or Obamacare, has made healthcare more expensive. Even so, he insisted it cannot be repealed, but has to be repaired. For the time being, though, he said the individual market has to be maintained. Not surprisingly, he announced he supports universal healthcare, which brought about the most enthusiastic applause during his speech. He said the popularity of a single-payer plan is increasing and people understand it will ultimately be how insurance works in the country.

When he shifted to the environment, Panetta told the audience that the first bill he co-sponsored was to prevent any oil or natural gas exploration along the entire West Coast. Then he co-sponsored a bill to prevent exploration specifically along California, and two more to do the same for the northeastern part of the country and the Arctic. He said with a Republican majority he couldn’t promise the bills would pass, but it was important to let the people know the bills were out there.

Panetta said he has been continuing the work of his predecessor, Sam Farr, in working on bringing back Clear Creek Management and Wildlife Area, which will provide 60,000 acres for off-road vehicles and 20,000 acres for wildlife refuge. He said the resolution passed unanimously in the Natural Resources Committee, and then it came to a House vote, where it also passed unanimously. It is now being discussed in the Senate.

Panetta said he has been involved in several roundtable discussions on rising sea levels. He said one important area of discussion is flood management. He said President Trump withdrew federal flood standards, which mandates that with any construction backed by federal funding, future flooding has to be taken into account. “I’m not saying climate change has caused any specific storm, but because of the warmer air and warmer water it makes the storms that much more intense,” he said. “We had three 500-year floods in three years in this country. It’s a reality and that’s why we have to prepare for it. That’s why I am introducing legislation to make sure President Obama’s federal flood management order that he submitted in 2015 is permanent law.”

He promised that because of his relationships with Republicans there will be bipartisan support for the bill. He commented that at a recent meeting on the topic there was mention of how climate change might affect tourism and the economy in certain areas of the country.

“That’s good because we’re talking their language,” he said. “Are we flat-out saying we’re talking about climate change? No. We're bringing it down a level because it’s very political. But in order to talk about it, let’s talk in their language, making sure we’re able to have that conversation with people across the aisle. There are Republicans who are willing and want to have those conversations.”

Panetta said he continues to remember advice from his father, Leon Panetta, on how to work with people in Washington: “'There’s always going to be a-holes, but you’ve got to be willing to deal with them to get things done.' I haven’t come across too many jerks. The best part of my job are the people I work with in Washington. I understand what it’s about: being able to have a conversation, being civil to one another, to politely disagree with one another, as long as it’s taking steps forward.”