Barajas will remain in custody as trial hearings continue. Possibility that Vanessa Flores-Ibarra was victim or accomplice still part of investigation. 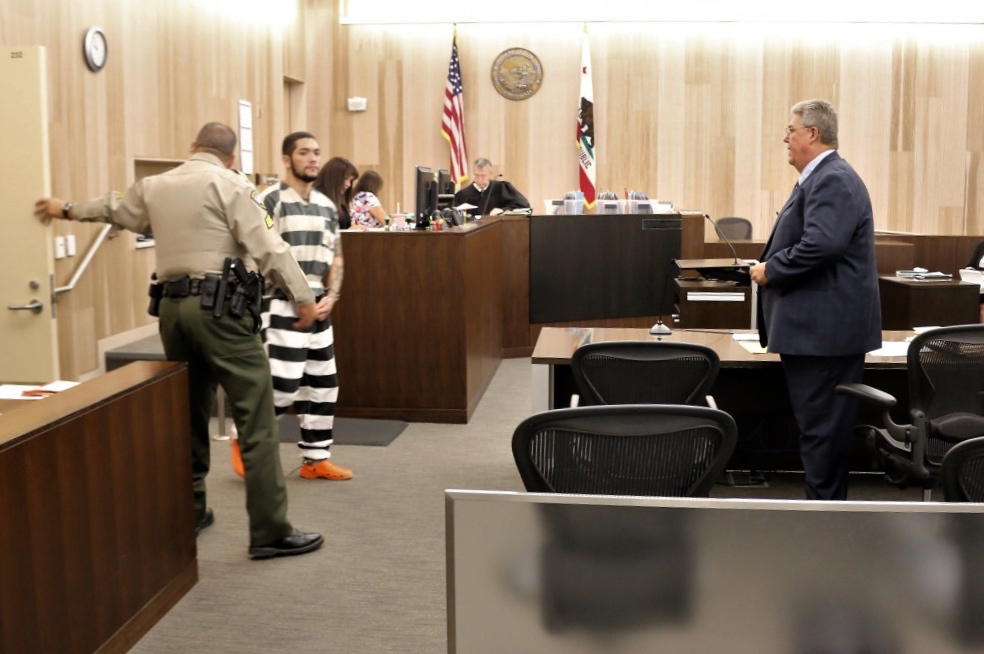 As his court-appointed attorney Greg LaForge waits, Jose Barajas is led into the courtroom. Photos by John Chadwell. After his July 26 hearing before Superior Court Judge Steven Sanders, Jose Barajas, 24, will continue to be held in the San Benito County Jail without bail. Having declined his right to a speedy trial, his case will move slowly through the hearing and discovery process, possibly leading to a trial for the 2014 murder of 19-year-old Ariana Zendejas.

Barajas’ public defender, Gregory LaForge, entered a not guilty plea to all charges. Barajas is facing seven felony counts and a number of misdemeanor traffic violations. When LaForge was asking Judge Sanders to wave time so he could download 90 reports from the DA to allow his investigator to begin working on the case, District Attorney Candice Hooper interjected, “I don’t think there’s any outstanding discovery, it’s just that counsel hasn’t had the opportunity to completely review it because it’s massive.”

“Did I say ‘outstanding’?” LaForge asked her without looking up from a file he was reading.

Hooper shot back, “No, the judge was looking at me for clarification, counsel.”

Apparently not noticing the edge to Hooper’s comment, Judge Sanders calmly told Barajas he had the right to a preliminary examination within 60 calendar days and asked him if he understood that. When Barajas said he did, Sanders asked if he continued to give up that right [to a speedy trial]. Barajas said he did. After that, Sanders scheduled Barajas’ next court appearance for Aug. 16, at 9 a.m.

The Alleged Crime and Manhunt

Because Barajas is now in custody and may soon face trial for murder, and the Hollister Police Department is still conducting the investigation and would not comment, the following was taken from HPD press releases and BenitoLink reporting.

On Aug. 1, 2014, HPD officers responded to a call of a shooting victim after arriving at Hazel Hawkins Hospital. The officers spoke to those who brought the victim, later identified as Zendejas, to the hospital. She was receiving medical care and was later flown by helicopter to a Bay Area trauma center. At the time of the initial press release, her medical condition was unknown. She later died at the trauma center.

During the initial investigation, HPD officers determined the crime scene as near B Street between the intersections of West Street and Monterey Street. Detectives proceeded to the crime scene to canvass the area.

Detectives quickly identified Hollister resident Jose Barajas, 20, was the shooting suspect. A description was put out because Barajas’ whereabouts was unknown. He was being sought for attempted murder, kidnapping and assault with a deadly weapon. And he was to be considered armed and dangerous.

It was also believed he had a female companion, 20-year-old Vanessa Flores-Ibarra, also from Hollister. It was not known if she was being held against her will or was an accomplice. Barajas was last seen driving a late model, silver or gray KIA and Flores was reportedly seen with him in it.

On Aug. 3, HPD released the statement that it “wishes to express our condolences to Ariana’s family and friends.” HPD Police Chief David Westrick added, “We will not rest until we can get the victim’s family and friends some sense of justice from this tragedy in their lives. Part of that justice would be with the person responsible in a jail cell.”

Two days later, HPD released a wanted poster as it continued to search for Barajas. There was also a missing person notice for Flores-Ibarra. According to the HPD release, Flores-Ibarra “…was last seen in the area of Tres Pinos after being picked up, along with suspect Barajas, by an unknown female driving a small to mid-sized grey or silver SUV, possibly a Kia. Flores-Ibarra’s mother told the media on Tuesday that she believes her daughter was kidnapped by Barajas, whom the daughter had dated.”

By Aug. 28, HPD was encouraging anyone in the public to step forward with any tips they might have about the murder.

“In my mind, helping the suspect is condoning what he allegedly had done on Aug. 1, 2014,” Westrick said. “I would ask that you look inside of yourself and ask a simple question: Do you want to be mentioned as a suspect with Jose Barajas or mentioned as a person who helped to bring him to justice and helped bring Vanessa home to her family?”

Westrick advised Barajas to give himself up and warned, “We will never stop looking.”

Hollister Detective Sgt. Dan Winn said tips about the case continued to come in, though not with the frequency they did shortly after the murder. Asked about Flores-Ibarra and whether police believed she was kidnapped by Barajas, Winn only said that her family, “…is torn up. They want her back.”

Hollister Police Captain Carlos Reynoso said that none of the family members have heard from her since the night of the murder. Sending a message to Barajas, Reynoso said, “If he wants this to be over, the best thing to do is for him to turn himself in and have his day in court.”

Westrick said at the time he hoped these messages “…will be broadcast as far and wide as possible. We’re trying to put each piece together to locate this suspect and bring Vanessa home to her family.”

On Feb. 9, 2015, Westrick reported that Flores-Ibarra was spotted crossing the border by herself from Tijuana, Mexico to the United States. U.S. Customs and Border Protection identified her and notified Hollister Police, who said she was already home with her family.

At an afternoon press conference, Chief Westrick said, “It has been a really tough case for us. We’ve made a lot of contacts and done a lot of investigation, but have been frustrated by the fact that Jose Barajas, the person who we think shot and killed Ms. Zendejas, is not in custody.”

Westrick posted on Facebook, “Vanessa has been found and is home with her family. We have had a very long night. I’m very happy right now, but we still have work to do to bring Barajas into custody.”

Westrick said investigators believed the suspect was still in Mexico, and that Flores-Ibarra was with him there for a time.

Westrick also said, “We are one step closer to solving this puzzle” and that he keeps a photo of Zendejas on his desk at work as a reminder. “I try to remind myself every day. I’m a father and a resident of our county. I’m also the police chief. This case hit me hard.”

In response to a question posed then if Flores-Ibarra could face charges as an accomplice in the murder, Westrick said, “At this point, we’re still vetting all the information that we have. Right now, she is listed as a returned missing person. Other than that, we still have a lot of work to do.”

Westrick said he did not “want to ruin the integrity of our investigation” by divulging too many details, as Flores-Ibarra will still be questioned about Barajas’ whereabouts. “It’s pretty normal for us to ask clarifying questions of anybody in a case of this magnitude.”

Four years later, Barajas was not so much on the run as he was hiding in plain sight in Guadalajara, Mexico, where Mexican law enforcement spotted him on July 12, 2018. Because he is a U.S. citizen, he was extradited and flown to San Jose International Airport, on July 13. He was escorted by Mexican and American federal agents, according to HPD Detective Bo Leland.

“I felt happiness, felt sadness because, as a mother, it hurts being in this place, but I also wanted justice,” she said in Spanish.

Camila Zendejas, 13, Ariana’s younger sister, said of Baraja’s arrest, “This is good, but it’s hard to get over the fact that this happened.”

She said she remembers her sister as a beautiful girl with an amazing personality who was always supporting her family.

During the July 13 press conference, Flores-Ibarra’s status surfaced again, when the question came up if she was being considered a victim or a conspirator. The answer was the same as Westrick had responded four years earlier that the case was still under investigation. Whatever her involvement, HPD spokesperson would not comment to BenitoLink one way or the other, or if her whereabouts was even known.