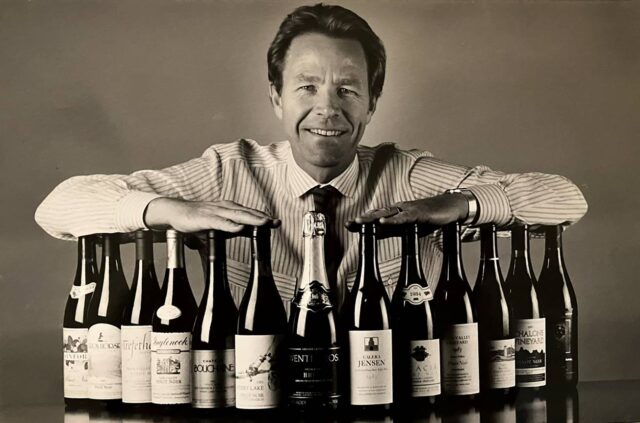 Wine Industry Advisor released the following statement about the death of Josh Jensen, the founder of the Central Coast’s famed Calera Wine Company:

Josh Jensen, the founder of the Central Coast’s famed Calera Wine Company, a visionary leader in the American wine community, and the iconic pioneer of luxury California Pinot Noir died on Saturday, June 11. He passed away peacefully at his home at the age of 78.

In the world of fine wine, and to generations of Pinot Noir enthusiasts, Jensen was a legend. An innovator and a pioneer, he was named the San Francisco Chronicle’s “Winemaker of the Year” in 2007, graced the cover of Wine Spectator in 2013, and was honored as a “Rock Star of Wine” at World of Pinot Noir in 2016. Universally respected by his peers, Jensen played a pivotal role in establishing Pinot Noir as one of North America’s great varietal wines. While doing so, he built Calera into one of the world’s most revered wineries—a captivating story that author Marq de Villiers told in his 1994 book “The Heartbreak Grape: A California Winemaker’s Search for the Perfect Pinot Noir.” Under Jensen’s leadership, Calera has been honored by Wine & Spirits as one of the “Top 100 Wineries in the World” nine times, with noted wine critic Robert Parker hailing Calera as “California’s Romanée-Conti.”

For those familiar with Jensen’s story, the comparison to Burgundy’s famed Domaine de la Romanée-Conti is particularly apt. In the early 1970s, after completing his undergraduate studies at Yale, where he was a member of the rowing crew, Jensen traveled to England to attend Oxford, where he continued to row while earning a master’s in social anthropology. During his time at Oxford, Jensen developed a consuming passion for wine and began exploring the winegrowing regions of Europe. Inspired by these travels, he decided to try his hand at vineyard work, which led him to a coveted harvest position at Domaine de la Romanée-Conti. The following year, Jensen deepened his understanding of viticulture and winemaking working at Domaine Dujac, and later at the Rhône Valley’s Château-Grillet.

Returning to the United States, Jensen began a quest to create a style of Pinot Noir that had not previously been realized in the United States. To achieve this goal, he spent the next two years searching for land rich in limestone—rare in California, but a key factor in the vineyards he most admired in Burgundy. In 1974, he found what he was looking for on the steep slopes of Mt. Harlan, a 3,278-foot peak in the Gavilan Mountains that divide Monterey and San Benito counties. The following year, while living in a trailer on the remote property with his wife and her seven-year-old daughter, Josh founded Calera, named for the Spanish word for “limekiln.” With no paved road, electricity or phone, he began planting his first three estate vineyards: Jensen, Reed and Selleck, named after his father, Stephen Jensen, his father’s friend and the only original non-family investor in the business, Bill Reed, and an early mentor for Josh in the world of wine, Dr. George Selleck.

In 1978, these vineyards yielded their first small crop, resulting in Calera’s debut trio of vineyard-designate Pinot Noirs. Jensen’s early releases were a revelation for wine enthusiasts, offering a new level of structure and sophistication in New World Pinot Noir. In the years that followed, Jensen established his own Calera Pinot Noir clone, and planted three more small vineyards on Mt. Harlan: Mills, de Villiers and Ryan, as well as small blocks of Chardonnay, Aligoté and some of the earliest plantings of Viognier in California. He also began working with some of the top vineyards on California’s Central Coast to make Calera’s Central Coast Pinot Noir, Chardonnay, Viognier and a Vin Gris of Pinot Noir. Believing in the uniqueness of Mt. Harlan, Jensen spearheaded the establishment of a Mt. Harlan American Viticultural Area (AVA), which he achieved in 1990. As a result, like Domaine de la Romanée-Conti, Calera is one of the only wineries in the world with its own AVA.

Throughout it all, Jensen followed his own uncompromising vision, never chasing trends, and always striving for the extraordinary. Because of this, Calera’s wines are revered by collectors for their purity and elegance, each one a liquid study in terroir. Through his innovation and leadership, he helped to redraw the map of California wine, earning the Central Coast accolades as one of the world’s great cool-climate Pinot Noir regions. By doing so, he catapulted California Pinot Noir into conversations about North America’s greatest wines, and played a pivotal role in establishing the foundation for the modern Pinot Noir boom.

Jensen’s achievements have been recognized on both sides of the Atlantic. Jacques Seysses of Domaine Dujac once noted, “I have tasted a number of Calera’s over the years, and I think they prove that limestone is important. To me they are the most Burgundian of Californian Pinots, and the ones I have tasted that really age well.” In honoring Jensen as the San Francisco Chronicle’s “2007 Winemaker of the Year,” journalist Jon Bonné echoed this sentiment, writing, “His limestone quest yielded what can unequivocally be called one of California’s grand crus,” adding, “Jensen’s efforts show the best of American winemaking. They are a reminder that the most extraordinary wines still come from a personal quest for perfection, a willingness to brush back skeptics and persevere in untested places.”

In August of 2017, after a storied 43-year career guiding Calera, and with three grown children each pursuing careers outside the wine industry, Jensen sold Calera to The Duckhorn Portfolio. Commenting on the sale at the time, Jensen said, “Having started the winery on a hope and a prayer, this is a wonderful way to ensure the future of Calera. I was able to place my life’s work in the hands of true wine people that believe in quality.” As part of the sale, Jensen took a position on The Duckhorn Portfolio’s board of directors alongside fellow wine icon and friend, Dan Duckhorn, and continued to offer his wisdom and insight on Calera for the next several years.

“Acquiring Calera was a rare opportunity to continue the life’s work and legacy of one of the most unique and influential figures in the modern American wine industry,” said Alex Ryan, president and CEO of The Duckhorn Portfolio. “Josh was a visionary. I consider myself very fortunate to have worked alongside him and gotten to know him. For those who understand the story of American Pinot Noir, his contributions cannot be overstated. Through his passion, perseverance and sheer force of will, he literally helped to carve the foundation for California Pinot Noir into the high slopes of Mt. Harlan. By doing so, he changed our industry forever. While his passing is an immeasurable loss for everyone who knew him, we honor and celebrate his life by continuing his legacy.”

For Mike Waller, who was appointed the winemaker for Calera by Jensen in 2007, Jensen’s legacy is clear. “In the 1970s, when Josh began planting his first vineyards on Mt. Harlan, Pinot Noir was barely relevant in California—and site-specific, terroir-driven Pinot Noirs even less so. But Josh had a dream, and he stuck to it, never wavering. When you worked alongside Josh, knew him, or even just tasted his wines, it was easy to become a believer in Josh’s dream of creating California Pinot Noirs that could stand alongside the world’s best. Over the years, I’ve had numerous winemakers tell me that they make Pinot Noir because of Josh. He showed generations of vintners and winemakers the way.”

Beyond his immeasurable contributions to the wine industry, Josh Jensen will be remembered for his great wit and charm, unique fashion sense, generosity of spirit, and his generosity towards his beloved team at Calera. He was a larger than life figure who was greeted like a rockstar in Japan in the early 2000s after Calera was glowingly featured in a famed wine manga. Back home, he was constantly on the road, traveling around the country selling wine, sharing stories and making American Pinot Noir converts. He lived an exceptional life, achieved extraordinary things, and left an indelible mark.

“I’m not sure my words are adequate to express my love for my dad and how much I will miss him,” said his daughter, Sylvie Jensen, “but I’ll add that Josh was a true original. He was larger than life, a dreamer, an idealist, a generous spirit, a man dedicated to his friends, community, and family, and above all to the ideals of friendship, truth, fairness, good food and wine, and stewardship of the land. We will all miss him tremendously.”

Josh Jensen is survived by his three children, Silvie Jensen, Duggan Jensen, and Chloe Jensen; and five grandchildren. A remembrance book will be available at the Calera Tasting Room for the next four weeks for anyone wishing to share a message, or condolences. The books will then be given to the Jensen family.

Police will be looking for drivers suspected of being under the influence of alcohol and/or drugs.