Courtney Evans was arrested on Dec. 15 when she refused to wear a mask during a Board of Supervisors meeting. 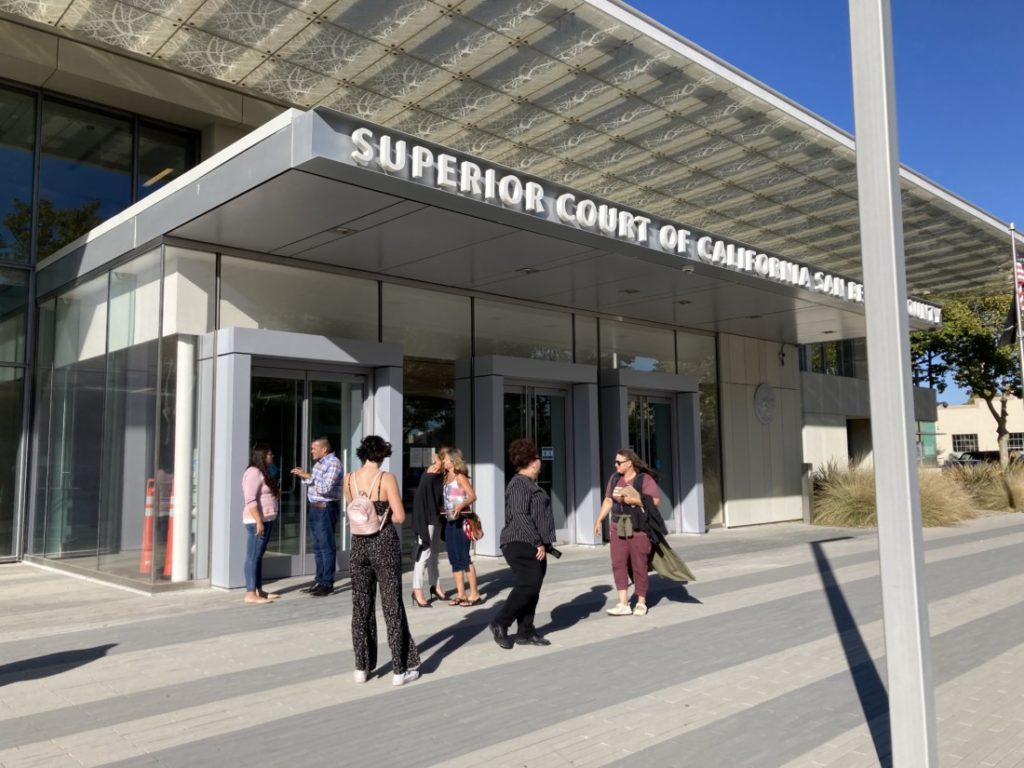 Courtney Evans hugs with Dalila Epperson after the jury did not come up with a verdict on Sept. 30. Photo by Noe Magaña.
×

After a two-day trial, a day selecting a jury and a day and a half of jury deliberation, Courtney Evans, a Hollister resident who was arrested on Dec. 15 inside the San Benito County Board of Supervisors chambers, was found guilty of resisting arrest. The jury found her not guilty of trespassing.

Evans was sentenced on Oct. 1 to one year of informal probation, 40 hours of community service and a $100 restitution fee. Both counts were misdemeanors.

The fee was paid shortly following the sentencing by Robert Bernosky, chairman of the San Benito County Republican Party. Tracy Henderson, Evans’ attorney, said the community service hours will be done through yoga classes at Juvenile Hall, where Evans has previously volunteered.

After the verdict, Evans’ comments to BenitoLink centered around the power the district attorney and sheriff have in our community.

“With all the shootings, with the car thefts, with what’s going on in our community, I hope that our sheriff and DA intend to use their power to keep the people safe, to uphold their oath to the Constitution,” Evans said.

Henderson said they are considering an appeal, which has to be done within 30 days of the verdict.

“She got a fair trial but the jury was confused on the statute. I don’t understand why the jury thinks—they actually told us—that any order from an officer they have to follow or it’s a crime,” Henderson said.

Evans, Henderson and Sean Baird with the district attorney’s office said they felt the jury took the case seriously. Testimony was given by Tom Keylon and Ed Nino from the Sheriff’s Department, Deputy County Administrative Officer Edgar Nolasco, Assemblyman Robert Rivas and other members of the public who were at the Dec. 15 supervisors meeting.

“People appreciate the fact that the jury took the time to consider the evidence and not rushed to a verdict,” Baird told BenitoLink.

Ellen Campos, assistant district attorney, told BenitoLink that the office was happy with the outcome and that justice was served.

“We’re glad that the jury found her guilty of the violation of resisting arrest and obstructing the police officers,” Campos said. “They were doing their job that day.”

Henderson and Baird met with the jury outside the courtroom following the verdict. Both attorneys asked the jury their reasons for their verdicts.

The jury said that it came down to the definition of resisting arrest—they interpreted it in that if a police officer asks you to do something, you must comply.

On the trespassing count, jurors said they had come to a verdict on Sept. 30 because they agreed Evans did not interfere with the public meeting, and that someone from the county should have screened people entering to verify they were meeting chamber policies.

In her closing statement, Henderson argued that Evans, 38, the owner of Kamal Yoga Studio in Hollister, did not obstruct the meeting as she sat alone, quietly in a corner waiting to speak on an item related to voting.

Members of the jury told the district attorney that in order for them to consider Evans guilty, they needed to see more evidence and hear more witnesses.

“It was not easy,” one juror told the group listening to the informal interview outside the courtroom.

Evans was defiant toward the charges throughout the process by refusing to wear a mask for her first three scheduled hearings. At the time of those hearings, the court required everyone to wear a mask inside the courtroom, which resulted in deputies denying entry to Evans.

She appeared before Commissioner Patrick Palacios on Aug. 10 in person after the court no longer required masks to be worn inside the courtroom. At that hearing, though her intentions were to represent herself, she opted to hire an attorney.

Following the sentencing, Evans told BenitoLink, “this is just the beginning.”