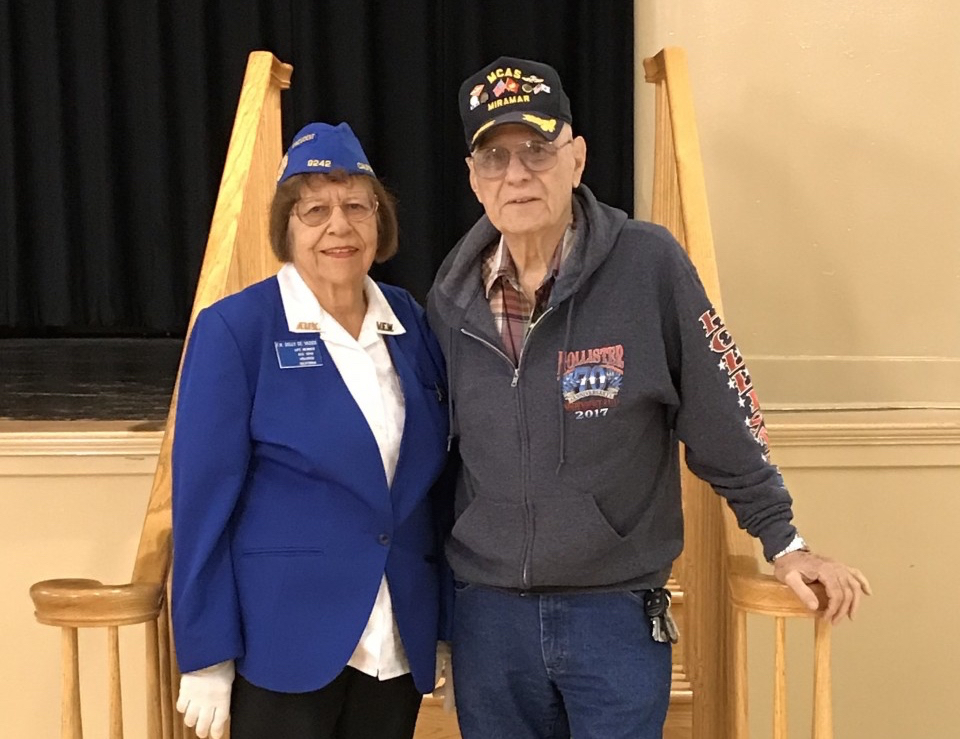 As the San Benito County native stepped off the ferry in San Francisco, an Air Force recruitment poster calling for female airmen caught her attention. Meanwhile, the teenager from San Jose was told by the judge that he could avoid jail time by joining the Marines. It was 1951, and the United States was leading a United Nations military campaign on the Korean Peninsula.

In a telephone interview with BenitoLink, DeVasier explained that her decision to leave nursing school and enlist in the Air Force in 1951 was an opportunity to “try something new.”

Her two years of military service were spent in Texas, where she provided medical care to those stationed at Randolph Air Force Base. It was during this time she met her late husband and fellow airman, Marvin.

The DeVasiers moved to Hollister after Marvin’s retirement in 1971.

Dolly counts her time in the Air Force among most memorable years of her life.

“I got to see different parts of the country and got to know what different people were like outside of the itty-bitty community of Hollister,” she said.

Today, the 87 yr. old, spends most days moving between her upstairs and downstairs office spaces at the Veterans Memorial Building, where she educates veterans about the importance of their DD-214 forms or helps them navigate their way through the U.S. Department Veterans Affairs website.

“She’s usually doing paperwork or on the computer,” said Hollister VFW post commander, George Nava, of DeVasier in his telephone interview with BenitoLink.

Nava explained that he made a conscious effort to include a female as one of this year’s grand marshals and vowed to continue the practice.

“There’s a lot of women that haven’t been honored and its about time we step up and recognize them,” he said, adding, “As long as as I’m commander I’m going to choose a woman.”

DeVasier, said Nava, was a natural first choice and is very deserving of the honor.

Sharing the title of grand marshal with DeVasier in this years Veteran’s Day Parade is Retired Lt. Colonel Richard Castro.

In 1951, Casto was an astray teen, facing a Santa Clara County judge who suggested that a military uniform may fit better than jail pinstripes.

Castro left the courthouse and beelined for the Marine recruitment center, he explained in his telephone interview with BenitoLink.

After basic training, he was sent to the Korean Peninsula, where he served on a helicopter rescue unit.

He remained in the Marines until 1960, returning to San Jose and starting a family.

A rocky marriage led to divorce in 1972. Confronted with alimony and child support that he couldn’t afford, a judge once again suggested the military.

“The judge told me that I had to get another job,” he said.

After completing officer candidate school, Castro was sent to Quantico, Va. He earned the rank of lieutenant colonel before retiring in 1982.

Castro moved to Hollister in 2010 and is an active member of the Hollister VFW.

His days are spent with his wife, family, and fellow veterans.

A few times a week the 82 yr. old has coffee at Jack in the Box with Hollister resident and Vietnam vet, Bob Picha. Once a month, he attends the veterans’ potluck at the Vets Building, telling stories of his time in Korea and the lessons he learned from his years of service.

And according to Nava, Castro has always found a way to give back to his military family.

“He has donated copy machines to the post and has paid for calling calls for soldiers,” the post commander said of Castro in his interview.

Like DeVasier, Castro is extremely honored and proud to be one of this year’s grand marshals. But he feels there’s plenty of others who deserve the title.

“Every veteran in the parade is a grand marshal,” said the retired lieutenant colonel.

Applications for the entry-free, parade are available at the Veterans Memorial Building at or by contacting Frankie Gallagher at 831.638.6434.