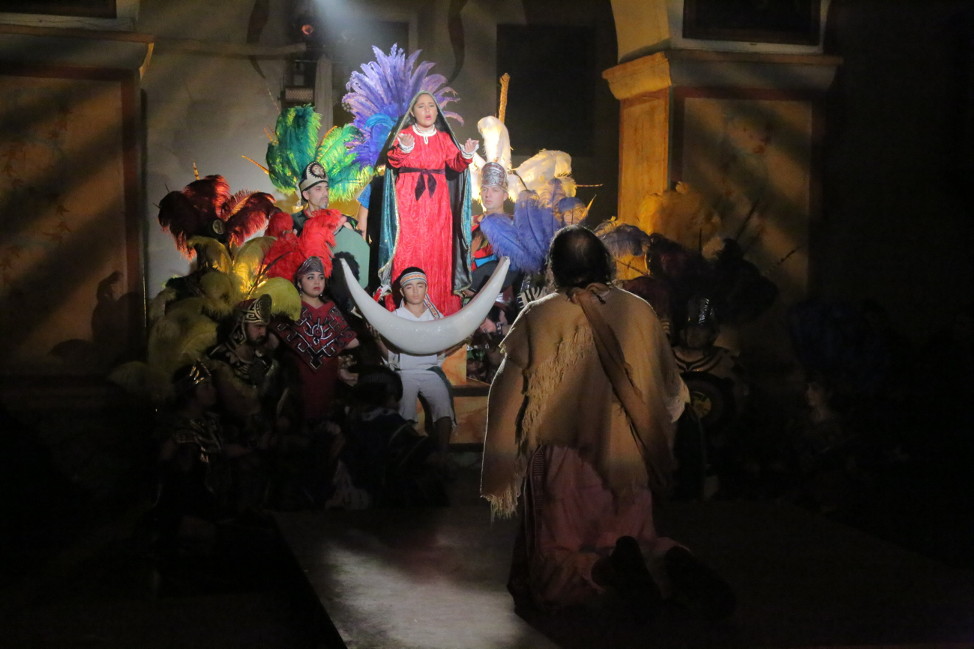 Over the last 40 years, El Teatro Campesino has been performing Christmas pageants within the church at Mission San Juan Bautista, alternating between two traditional plays each year. In 2019, after the Mission became unavailable, the company moved the production of “La Pastorela” to the Teatro playhouse.

This year, El Teatro is presenting the second play, “La Virgen de Tepeyac,” as a radio performance, in keeping with the restrictions on live theater because of COVID-19.

“Obviously, we are in a new situation with this pandemic,” said Kinan Valdez, the play’s director. “Creatively, the radio play is a different approach to taking our traditions and transposing them into an experience that can be appreciated by our audience. But that being said, this play has a history of going through various iterations.”

Reimagining the play as purely an audio experience after its long history of live performances has been a challenge.

“With this production,” Valdez said, “we wanted to at least evoke the vision of the play. We have had to use conventions that are more familiar to radio audiences, but the focus is still on being able to tell the story to our community members.”

The production began with a series of Zoom meetings with veteran Teatro musicians, actors and production staff.

“We knew we were not going to be able to bring people into any indoor space,” Valdez said. “But canceling the show was not an option. We looked at everything between those two points. We looked at doing it as an outdoor show, like a drive-in theater. While that was safe for the audience, it involved risk for our performers. We thought about an outdoor audio production, but we had the weather to contend with.”

Deciding to mount a radio version of the play available for people to stream at home, El Teatro Campesino was still left with the problem of how to record it.

“We thought about creating a safety zone where we could record it live,” Valdez said. “But some of our company members are at a risk level not recommended for any kind of gathering. So Zoom became the vehicle by which we could hold our meetings and rehearsals.”

Initially, there were concerns over whether the play would survive the transition to radio.

“We would like to have the play not collapse due to the fact that we are losing all the visuals,” said Tim Tompkins, long-time cast member and musician. “At one point Kinan joked that it was a one-act play that was elevated by the mission environment, the sound, the costumes, the dancing, and all the things that were not directly involved with moving the story forward. That aspect of the play is a huge thing.”

With the visual elements gone, the 2020 iteration of the play was shortened from the usual 80 minutes to approximately 45 minutes, which allowed for station breaks and commercials.

Using techniques perfected in the production of their video version of “La Conquista de México,” produced as part of their remote learning program for elementary schools, performers recorded their musical parts, which were then merged together to create the soundtrack.

“I performed the songs with my wife Francis,” Tompkins said. “Then I optimized them, cleaned them up, and got them ready for the other instruments in the production. We all worked on our individual elements with an eye towards the unified project and the result we were looking for.”

The show consists of 17 songs and various pieces of underscore, transitional music, or special effects. Veteran El Teatro member Noe Montoya, who died Nov. 26 from COVID-19, took on the role of contributing sounds of indigenous instruments with the assistance of Emmanuel Rocha. According to Rocha, they had completed their work on all but one of the musical pieces at the time of Montoya’s death.

Along with the radio play, El Teatro Campesino is releasing an on-demand video of “La Virgen de Tepeyac” as performed in the Mission in 2008, with Montoya playing his signature role of Juan Diego and theater founder Luis Valdez performing as El Obispo. The recording is the only commercially available version of a Teatro play performed in the Mission.

“This recording has become a historic document,” said Luis Valdez. “It has become more precious to us just because we will not be able to perform the play in the mission again.”

“La Virgen de Tepeyac” premieres on the El Teatro Campesino website on Dec. 9. Check the site for dates and times. The video will be screened for free at 6 a.m. on Dec. 12, the feast day of the Virgin of Guadalupe. Following the free screening, the video will be available for rent on the website.