Kip Ward, principal of Ladd Lane Elementary School, believes kids who can be taught to be leaders in school will succeed in life. He invited his brother, Kirk, a successful screenwriter and actor, to speak to students to tell his story. 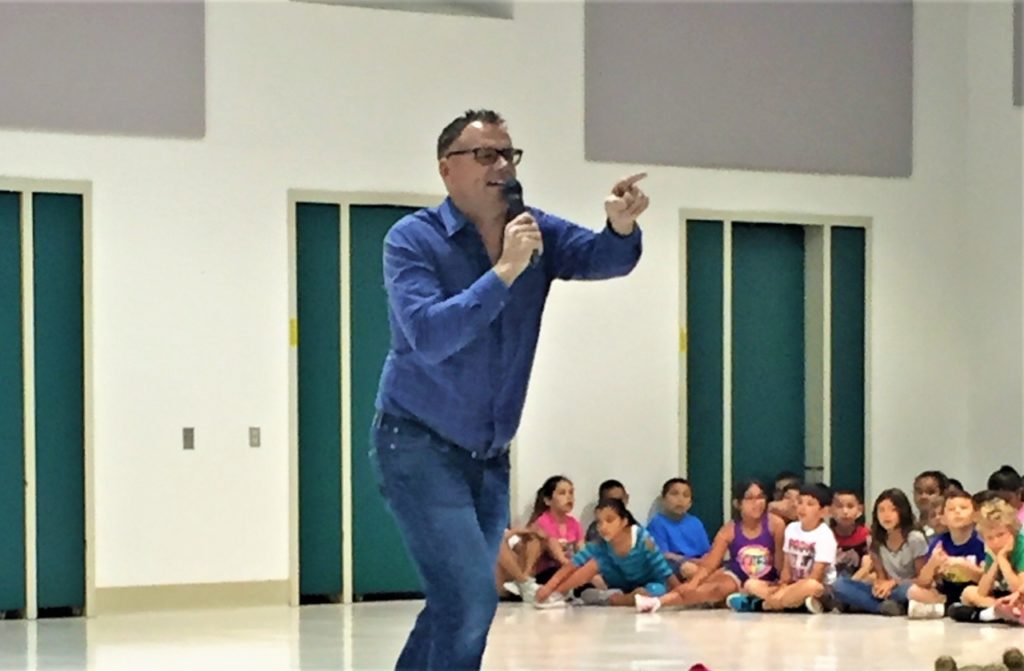 Kip Ward has been an educator in Hollister for more than 24 years, and for the past nine years, he has served as the principal of Ladd Lane Elementary School. The school which has 680 students, TK or transitional kindergarten, thru fifth grade. He is a firm believer that today’s learners—his term for students—are tomorrows’ leaders. In fact, he believes it so much every email he sends includes the slogan “Turning Learners into Leaders!” that he communicates every day not only to the students, but teachers and parents.

Last week, the student body turned out for the first monthly speaker to impart his story of what leadership meant to him. That person was Ward’s brother Kirk, who was in town for the long weekend to visit relatives and old friends, having grown up in Hollister and graduated in 1989 from San Benito High School.

Ward said the vision of turning learners into leaders is to help students become leaders, and if they take on the persona of leadership, they will be successful at whatever they tackle in life.

“Today was our first leader of the month,” Ward told BenitoLink. “We’re going to invite a leader each month from the community to speak to our kids to give a leadership message on what it takes to be a leader, pushing through adversity and never quitting. I just wanted to expose the students to as many different types of leaders as we can because it benefits them.”

Ward said he and Jeannine Ostoja, assistant principal, and various staff started talking about the program last year. The program focuses on encouraging leadership throughout the school campus, with a goal to develop student leaders of the month from each classroom.

“Those students go to other classes and present to their fellow students their ideas of what leadership is and why they were chosen as student leaders,” he said. “It’s going to allow fifth graders to talk to third and second graders and vice versa.”

Ward said there is no formal leadership class, but rather the message is passed verbally throughout the campus. Students are told that part of the experience at the school will be to focus on leadership through daily experiences, part of which is adopting the motto, “turning learners into leaders” as a structure used to improve the school climate. He said the school district had already taken part in the “Capturing Kids’ Hearts” program offered by the Flippin Group, which is a methodology to improve the school learning experience.

“Our entire faculty was training in ‘Capturing Kids’ Hearts’ over the summer,” he said. “It was a perfect time to match up with that and give ourselves a focus. I passionately believe if we can teach kids to be leaders on the playground, in the classroom, and even as they move out into the community, they’re going to be successful. Being a leader is not easy, but it makes for successful students and successful community members.”

Ward said the program is not curriculum-focused, but one that is a concept to encourage students to become involved as leaders on campus, sometimes in small, but important, ways.

He said his role is to go around to the classes and talk to students about what he thinks it takes to be a leader and then encouraging them to say what they think about leadership.

“We just want to make it part of the fabric and culture here,” Ward said. “Actually, it already is, but we just needed to put a motto, a logo and energy behind it.”

When it came time to line up the first monthly leader to speak, Ward didn’t have to search very hard to find a person who has worked hard for many years and is extremely successful in his chosen line of work. Kirk Ward is an accomplished actor in television and movies. He is also a scriptwriter and producer, who has worked with major media companies, including Disney, Amazon, the Cartoon Network, Lionsgate and YouTube Red. His most recent project is a television pilot called “Skyward,” that is playing on Amazon Prime.

“It was so much fun,” Ward said of his brother’s speaking appearance. “He spoke for about 15 minutes and his message was to never quit as he shared his experiences as a screenwriter and actor and how many times he was told ‘no,’ but he continued to grind forward. That message to the kids was great.”

Kirk described his few minutes in front of the assembly as a wonderful experience and commented that any time he has a chance to inspire kids it’s better than anything he does on a daily basis.

“I told them to never give up and I used my life as an example of being in an impossible business and what it’s like to survive with more than half of my life—he’s 47—in the entertainment business,” he said. “When I was young, learning did not come easy. I did not connect with learning. I shared with them that it was when I started performing and writing my own material that my brain exploded.”

He said he finally figured out he was more of a visual learner. To him, it’s important that people realize there is more than one way to learn. He told them that not all of the most successful people he has come to know are necessarily the smartest ones, but they simply never give up.

“I told them on a daily basis all we can do is to try our hardest,” he said.

Kip Ward said when the assembly was over he received a text message from a first grade teacher that Kirk had inspired one of her students who now wants to write movie scripts. The student used dialogue from a popular kids’ movie to write a script and Ward forwarded it to his brother.

“That’s the whole concept,” Ward said, “exposing students to as many positive leaders as we can. When we finished the assembly, I reminded them when they go out over the weekend to be a leader, do the right thing, and help people. I told them ‘sometimes you’re going to have to make the tough decisions. It’s not always going to be the popular decision, but it’s the right decision.'”