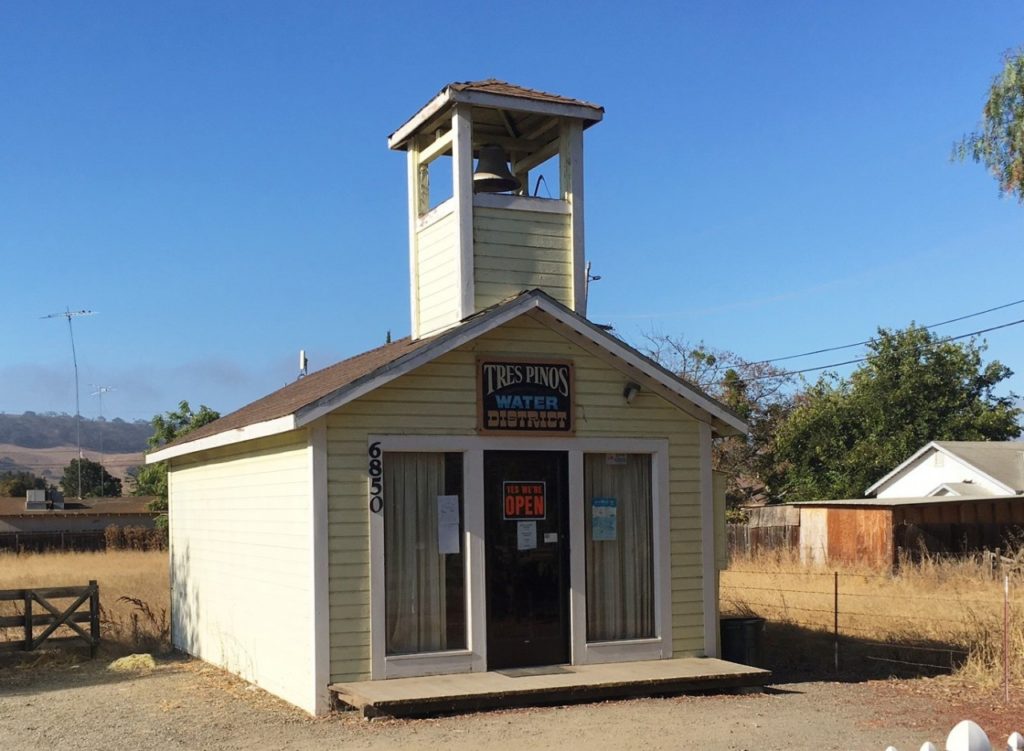 On Aug. 12, local rancher, John Eade, filed a complaint with the Fair Political Practices Commission (FPPC) in Sacramento, accusing the board of directors of the Tres Pinos Water District and trustees of the school district of a conflict of interest.

John and Jae Eade have been trying to develop a small plot of land in Tres Pinos since 2005. First, they wanted to build a 44-room hotel. Eade said the project was stopped by local residents and the Tres Pinos Water District. Then in 2013, they tried to build a 21-home subdivision. Again, the supposed lack of water hampered the Eades from developing the site.

In his complaint, Eade has accused Robert Frusetta and Edward Schmidt, along with Michael Sargeant (who resigned from water board in August), and Luciano Medeiros (former principal of Tres Pinos Elementary School) of a conflict of interest. In particular, Eade claimed that Frusetta and Schmidt used their positions to influence others to block both developments. Frusetta did not respond to BenitoLink inquiries seeking comment, while Schmidt declined to comment.

In his written complaint to FPPC, Eade stated that according to the commission’s regulation and the California Code of Regulations, an official has a conflict of interest if they have an economic interest in real property located within 500 feet of the boundaries, or proposed boundaries, of the property which is the subject of the governmental decision.

Eade claimed that Frusetta lives directly across the street from the property he wanted to develop, a distance of less than 300 feet. He also claimed that Schmidt lives on a property that shares a common boundary with his own.

Eade went on to write in the complaint that on March 13, 2013, he applied for a “will serve” letter from the Tres Pinos Water District to provide water and sewer services to his property for his project. He claimed that he had seen Frusetta and Schmidt engage in a board discussion to influence another board member concerning the vote on his request. He wrote that both men also opposed the project during a San Benito County Planning Commission meeting.

Furthermore, Eade claimed that Schmidt, in his role as a trustee for the Tres Pinos School District, engaged in several discussions in order to influence other trustees’ decisions regarding his property. Eade provided minutes of each meeting to FPPC along with his complaint.

Subsequently, the board of trustees for Tres Pinos Union School recommended on Dec. 10, 2015, that the Planning Commission deny the project because of the negative impact it would have on the water and sewage infrastructure. The trustees also stated that they were concerned that Eade had underestimated the projected number of students that would move into the district if the project were approved. The trustees stated, according to the minutes of the meeting that “…if 25-30 students were to move into the housing project once completed, then the District would have to at least install a new portable classroom. Impact fees alone would not be sufficient to cover the cost. Therefore, Trustees feel it should be the responsibility of the developer to fund the cost of the building installation.”

On Aug. 31, 2016, FPPC sent a letter to Eade, with copies going to Frusetta and Schmidt, confirming that it was conducting an investigation into allegations, after it received Eade’s complaint.

“Eleven years ago, when I first bought the land, I talked to some of the businesses and said if I put a hotel there, it would have helped all of the other businesses because there would be 40 to 100 extra people in town every night,” he said. “That adds up, especially for three or four restaurants. The same two people were the main players that stopped it.

“Then in 2012, we decided to subdivide it and sell off the maps because all the hearings we had about the hotel, all the neighbors said they wanted it to remain residential. We went residential and the same two people did the same thing to us.”

“There were no grounds for stopping the project,” Eade said, “other than these two guys lying about the offers we’ve made over the years to help Tres Pinos Water District, amounting to over $700,000, to put in new water tanks and wells over the years.”

Eade said that while he wants to collect damages, he still wants the property to be hooked up to the water system.

“They refuse to do it,” he said. “We’re in the district. They’re in the business of providing water. Every issue that they’ve brought up, we’ve offered them the financial means to alleviate them.”

Speaking on behalf of Tres Pinos Water District, local attorney Christine Breen said anyone is entitled to register a complaint for any reason, whether there is a factual basis or not. She said the water district is responding to Eade’s complaint and she referred to a section of the California Code of Regulations that is often referred to as the Public Generally Exception.

“When you live in a very small community like Tres Pinos, and are in no different of a situation than a significant segment of the public, the 500-foot ban, or presumption of a conflict of interest, does not apply,” she said. “If you look at the district’s boundaries, you’ll see that the population of Tres Pinos is concentrated in that area. A majority, if not all, of the directors would be banned on making any decisions concerning any property in Tres Pinos by virtue of their proximity to one another.”

Breen said that, ultimately, it was the county Board of Supervisors that made the decision against Eade last January. She said the timing of his complaint with FPPC in August “is certainly suspect,” in that water district board members are coming up for election in November.

“If Mr. Eade had a problem with the decision that the Board of Supervisors made on his project, his recourse is really against the county and not the (water district) board,” she explained. “He’s filed a federal lawsuit against the (water) district. He has filed a suit that has entered into a tolling (waive a right to claim that litigation should be dismissed due to the expiration of a statute of limitations) agreement with the county, so he’s not pursuing his claims against the county.”

Breen said that after the Board of Supervisors rejected his project in January, Eade had 60 days to file a writ of mandate (a court order to a government agency or another court to correct its previous illegal behavior in order to comply with the law) challenging the decision in Superior Court. She said Eade’s attorneys approached the county to enter into an agreement asking if it would agree to extend the time to pursue Eade’s action against the county while he, in turn, continued to pursue the federal lawsuit against the water district.

“For whatever reason, the county agreed to enter into that agreement,” she said. “As I understand it, Mr. Eade is upset that the county rejected his project, but that was a decision the county made.”

The San Benito County counsel’s office affirmed that Eade had filed the lawsuit against the county. The office provided BenitoLink with the document showing that Eade's attorneys had, in fact, filed a writ of mandate on May 29, 2016, as well as the federal lawsuit in the Northern District of California, challenging the water district’s actions. The document also stated that Eade and the county had entered into a tolling agreement, which extended the time the county had to respond to his suit from June 20 to Aug. 4.

Breen also addressed Eade’s claim that he had offered to pay for infrastructure in order to have water delivered to his property. She said his claims are “not supported by the facts that we have.” She said that he has made offers in the past to pay for stop-gap measures, but what the district wants is an overhaul of the entire system.

“They are in long-term waste management planning process that’s grant-funded through the state,” she said. “Mr. Eade has never offered to pay for the impact that his project would have on the district. He has offered to pay for a plastic tank. He’s made offers that would expire in five days. There’s never been a real, genuine offer to do what’s needed to bring the district up to the current state of water treatment compliance.”